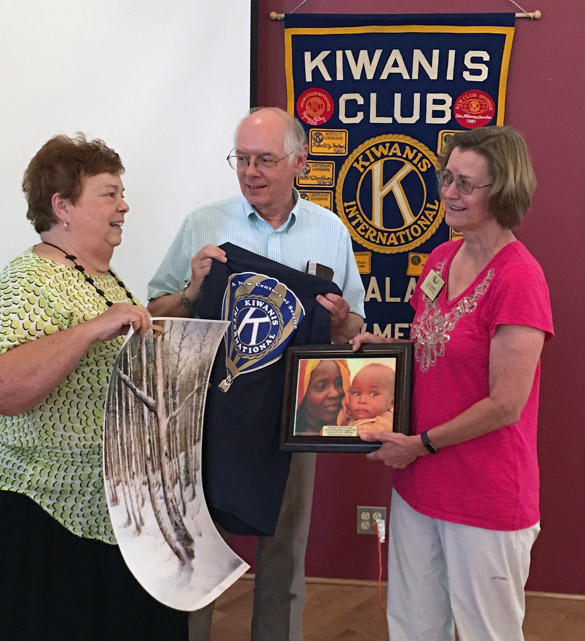 Don Casperson, center, spoke at Los Alamos Kiwanis recently, updating the club on the organization’s national and regional conventions and on Project Eliminate, a campaign to wipe out maternal and neonatal tetanus worldwide. He is shown holding a t-shirt from the regional convention in Albuquerque. At left is Cheryl Pongratz, who presented him with a Secundino Sandoval print—a gift from the club. At right is Los Alamos Kiwanis President Lisa Wismer, who holds a plaque saying that the club’s donations have saved the lives of 20,800 babies. Photo by Morrie Pongratz
By CHARMIAN SCHALLER
Los Alamos Kiwanis Club

Project Eliminate—the Kiwanis International-UNICEF project to wipe out maternal and neonatal tetanus worldwide—is making great strides, and the Kiwanis Club of Los Alamos has played a significant role in the campaign.

Maternal and neonatal tetanus is an excruciating disease that strikes new-born babies, causing agonizing sensitivity to light, sound, and touch. A baby that develops this disease experiences such pain that he or she cannot even tolerate the mother’s touch. The disease kills approximately 49,000 babies and a significant number of women each year. It is common in certain poor countries where women deliver babies on dirt floors. However, a series of three shots can make a woman and all the children that she later delivers immune to the disease—for a cost of less than $2.

Kiwanis International (KI) and UNICEF agreed several years ago that KI would raise the necessary money ($110 million), and UNICEF would do the ground work, inoculating women at risk for the disease. Together, they hoped to stop the disease in its tracks.

Kiwanis Southwest District (SWD) Division 3 Lieutenant Governor Don Casperson told Los Alamos Kiwanis (his home club), in a recent presentation, that as of Dec. 31, 2015, KI had reached its goal of raising $110 million. He said that approximately $54.5 million has already been handed in to KI. The remainder of the $110 million is in pledges. As money rolls in to KI, it is passed along immediately to UNICEF.

In 1999, Casperson reminded his audience, 59 countries in the world were dealing with maternal and neonatal tetanus and reported 225,000 neonatal deaths. The number of countries is now down to 20, and Kiwanis believes that two more countries will be removed from the list by the end of this year, and three more will be taken off the list the year after that.

“We really have done a great job,” Casperson said.

Los Alamos Kiwanis, one of the clubs in SWD, pledged as its part of the campaign to raise $37,500. By Aug. 6, it had met this goal and paid in cash. As a result, Los Alamos Kiwanis was one of six clubs in the district that reached Project Eliminate Model Club status this year. It was awarded a plaque at the Aug. 5-6 SWD Convention in Albuquerque.

The plaque wasn’t just the usual wooden rectangle with a few lines of text on it. It was, instead, a mounted photo of an African mother and child, and at the bottom, it said, “Los Alamos saved 20,800 babies.”

Casperson said, “I’m impressed that we completed our pledge in less than two years.” He said some clubs are still struggling to come up with the money or the promises of money.

Casperson reported to the Los Alamos club on both the KI Convention, held in Toronto, Canada, at the end of June, and the Southwest District Convention held last weekend. He attended both meetings. Approximately 2,000 people from all over the world attended the Toronto Convention. The SWD Convention drew 246 registered participants.

The major goal of Kiwanis continues to be service to the children of the world. For that reason, Project Eliminate is a perfect expression of its worldwide inspiration.

In Los Alamos, the club plans, raises money for, and presents the Fourth of July Festivities in Overlook Park each year; holds several annual pancake breakfasts (including Breakfast with Santa); supports the Foster Children’s Christmas Party in Española with money, food, and volunteers; awards scholarships; and donates money to numerous other good causes.

Kiwanis, an organization of approximately 190,000 men and women, is actively seeking new members—in Los Alamos, all over the Southwest District, and all over the world. Anyone in Los Alamos County interested in joining may contact Kiwanis President Lisa Wismer (469.1465, lclough@unm.edu ), or any other active Kiwanis member.