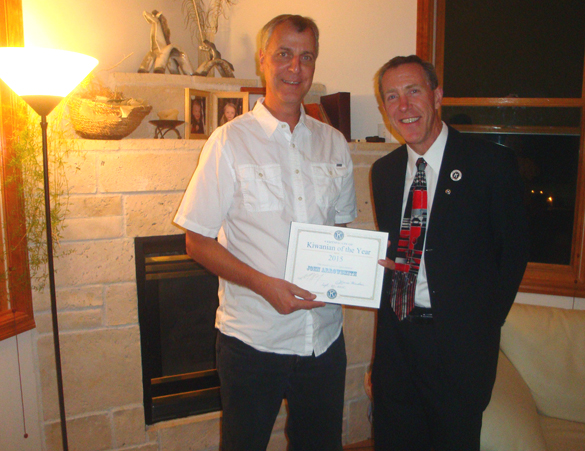 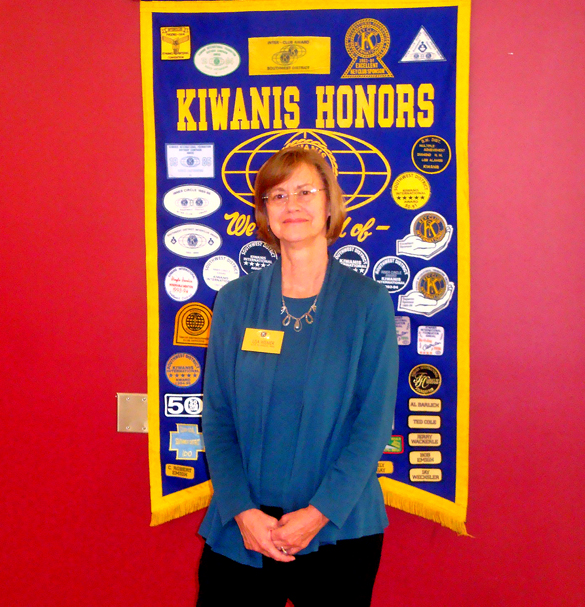 Lisa Wismer was inducted recently as the incoming president (for 2015-2016) for the Kiwanis Club of Los Alamos. Photo by Don Casperson

The Kiwanis Club of Los Alamos honored its new leaders (who will take office Oct. 1), and announced the “Kiwanian of the Year” recently during a potluck installation dinner at the home of the club’s treasurer, Cindy Eaton.

Lisa Wismer will be the Kiwanis president in 2015-2016. Wismer, who holds a bachelor’s degree in business and a master’s degree in education, is director of business operations for the University of New Mexico-Los Alamos. She joined Kiwanis in 2009.

Steve Boerigter, who will complete his term as 2014-2015 Kiwanis president Sept. 30, announced the selection of John Arrowsmith to receive the “Kiwanian of the Year” award, the highest honor that a local Kiwanis club can bestow. Boerigter said he chose Arrowsmith for the honor because he had “filled in every single spot where we needed help.”

Boerigter noted that when a key position on the board fell vacant, Arrowsmith agreed to fill it. When the club needed someone to serve as chairman for Los Alamos Kiwanis pancake breakfasts, Arrowsmith stepped up and took on that job, too.

He’s also been assisting the club’s House Committee, which needed help after a long-time member moved to Albuquerque.

Club members gave Arrowsmith a Nambe chips-and-dip dish to thank him for his extraordinary service, and club members clapped warmly as he stepped up to receive it.

In a telephone interview later, Arrowsmith, originally from Connecticut, said that he holds a bachelor’s degree in accounting and a master’s degree in business administration, both from New Mexico State University. He moved to Los Alamos in 1990, joining the County Utilities Department. He retired in 2014 after capping his career with six years as county utilities manager.

Arrowsmith and his wife, Mary, reared two sons, Nathan and Sam, in Los Alamos. Both are now lawyers in Arizona.

Arrowsmith’s first relationship with Kiwanis was with Sunrise Kiwanis, a morning group in Los Alamos that eventually folded into the larger noon group that is the Kiwanis Club of Los Alamos today. Arrowsmith was, at one time, president of Sunrise. When Sunrise disbanded, he and several others joined the noon club, and eventually, he served as president there, too.

Other Kiwanis members say that he has always been a hard worker—and he flips a great pancake.