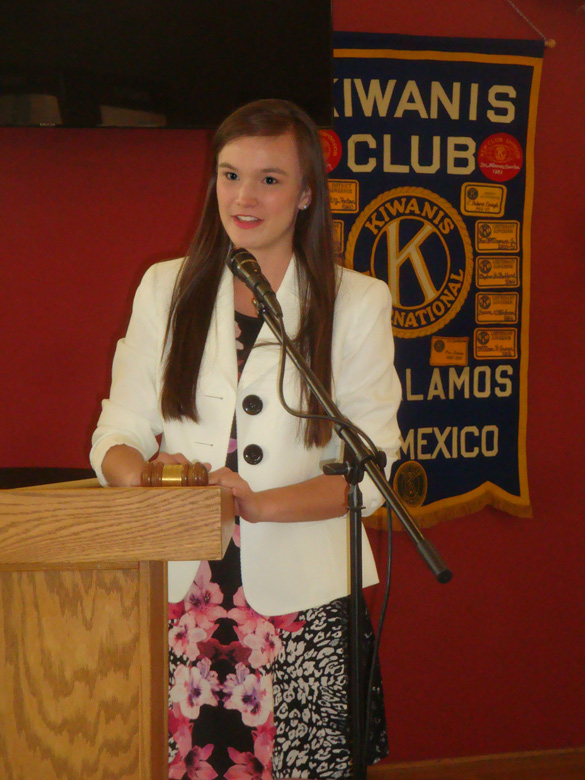 Their interests range from math to ballet. All of them have stellar grade point averages. The Kiwanis Club of Los Alamos, however, doesn’t award its scholarships just on the basis of academic achievement at Los Alamos High School (LAHS). To win one of these scholarships, a student must also have a record of remarkable service to the community.

The accomplishments of each of the five scholarship winners for 2015 would fill a printed page.

Kiwanis thinks that all five of its winners this year are outstanding. The club assigned time during each of the first three Tuesday Kiwanis meetings in June to hand the winners their checks and hear about their plans and opinions.

Four scholarship checks have already been handed out at meetings so far this month, and, in each case, a Kiwanis mentor took time to describe what made the individual scholar a winner. As part of the ceremony, each student was then asked to speak briefly about experiences at LAHS and to outline college and career plans for the future.

Their special qualities were on display June 9, when they were warmly introduced by Kiwanis mentors.

Long-time Kiwanis youth liaison Morrie Pongratz introduced Pestovich, who was accompanied by both her parents. Pongratz had said in a letter of reference for her that she is “a responsible, inspired and humble young woman” who has been involved in many extracurricular activities that have taught her “great leadership skills and great teamwork skills….”

A partial list of her activities showed: four years in Key Club (a Kiwanis-affiliated high school organization) with more than 30 hours of community service each year; four years on the LAHS Student Council and a year as senior class vice president; participation in LAHS Marching Band/Color Guard (Color Guard section leader for one year); selection for National Honor Society; participation in Natural Helpers; and membership in National History Day (where she won regional and state awards and participated in national competition twice). She also worked as a summer library volunteer and a Sunday School childcare volunteer; participated in the Los Alamos Middle School and LAHS Orchestras and the Santa Fe Youth Philharmonic Symphony (she plays violin); participated in dance and baton twirling activities; and was active in Girl Scouts. She worked as a high school co-op student at Los Alamos National Laboratory (LANL), as a student intern at Flowers by Gillian/KRSN, as a student shelver at Mesa Public Library, and as a teacher’s aid and student helper at Los Alamos Public Schools Summer School.

Pestovich said she plans to attend New Mexico State University this fall, majoring in chemical engineering. She hopes to pursue a research career.

Pongratz asked her which of her many volunteer activities was her favorite, and she listed the “Empty Bowls” program. He also asked what she would change if she were made principal of LAHS. She said more effort should be made to “remember the middle students.” LAHS has great AP (Advanced Placement) programs and an excellent special education program, she said, but students who are academically in the middle “tend to get lost in the system.” 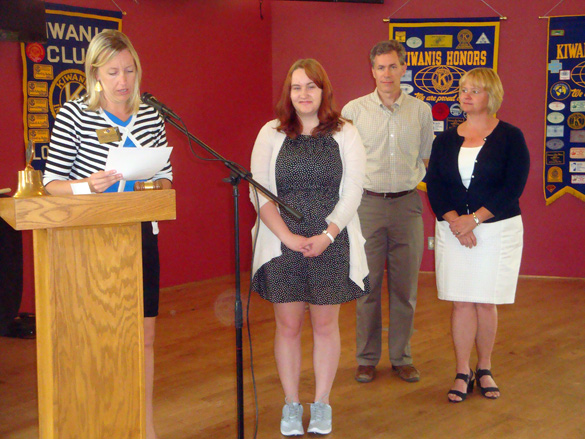 Another Kiwanis member, Kristy Ortega, executive director of the United Way of Northern New Mexico, introduced Phillips, who also was accompanied by both of her parents.

In a letter of reference for Phillips, Ortega said, “Emma has been an active member of the United Way of Northern New Mexico Youth Team for the last two years. She was active in planning, coordinating and successfully executing four to five events in a four-month period.” Ortega noted her “ability to be a leader,” her setting of “achievable goals,” and her “clear and concise communication.”

In her introductory remarks on June 9, Ortega said, “My favorite memory of Emma involves ‘High Tea on the Hill.’ There were a lot of dishes to be cleaned, and she took charge.” Ortega also remembered Phillips taking time to sing the theme song of “Frozen” to Ortega’s little daughter, Olivia.

Phillips’ list of activities included the following information: She has been active in Key Club for four years, serving as junior class representative and president (2014-2015); she served as secretary and president of French Club; she was secretary of the Student Council in 2013-2014; and she is a member of National Honor Society. She has volunteered with the United Way Youth Team; Natural Helpers; and Bethlehem Evangelical Lutheran Church. She has worked as a babysitter since 2011, and she is, at present, a co-op student at LANL. 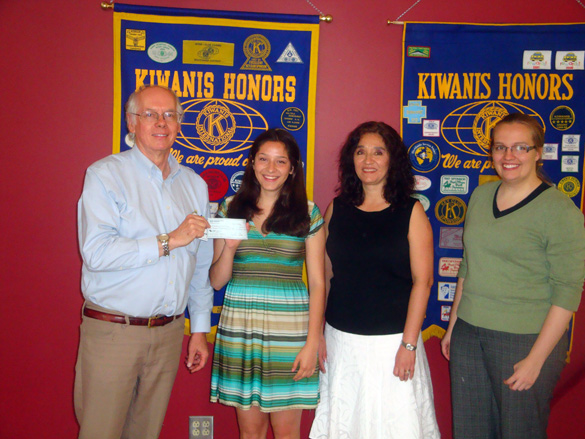 Kiwanis Division 3 Lieutenant Governor Don Casperson wrote one of the letters of recommendation for Criscuolo, who was accompanied by her mother during the awards ceremony. In his letter, Casperson said, “Sarah is an outstanding Key Club member, and has just completed her term as Lieutenant Governor of the Sangre de Cristo Key Club Division of the Southwest District (SWD) … And during this year, she was also asked and cheerfully agreed to fill in as a temporary Lieutenant Governor for yet another club division in the SWD that needed help.”

He noted that she was a primary organizer for the Southwest District Convention for Key Club March 27-29 in Albuquerque, and was honored with the prestigious “Sandy Nininger Award.” Casperson said that in her senior year, she devoted a total of 60 hours of Key Club volunteer time to community service.

In addition to her Key Club activities, Criscuolo’s scholarship application showed that: she has been involved in National Honor Society, Girl Scouts, National History Day Club, soccer, and Link Crew (a senior-freshman system to welcome incoming students at LAHS).  She has job experience as a kennel worker at the Los Alamos Animal Clinic, and as a medical intern at Christus Santa Rosa.

Criscuolo plans to go to the University of New Mexico this fall. She said she will begin as a “pre-medicine” major, but plans to keep “an open mind” about her future.

Asked what she would change if she were made principal of LAHS, she said she would offer “more opportunities for extracurricular activities.” She also commented that as a Lieutenant Governor, she found that, “The Key Clubs that were most successful in the district were the ones that had strong Kiwanis Clubs behind them.” One of those, she said, was the Los Alamos Key Club, and she told Kiwanis, “Thanks!”

Criscuolo’s scholarship was a special one, awarded in memory of the late Lou Pierotti, organizer of an almost unbeatable fund-raising softball team sponsored by Kiwanis many years ago. Pierotti’s son, Peter, who now lives in Albuquerque, sent a letter to Los Alamos Kiwanis and to Criscuolo that said, in part: “I want to express my appreciation on behalf of my family to the Kiwanis Club of Los Alamos for dedicating a scholarship as a memorial to my father … Lou was proud to serve the Kiwanis organization and touted his honorary membership as one of the greatest honors he had ever received … Sarah, … my father would have been overjoyed in your selection for this scholarship … I know Lou would have been impressed by your dedication to service, volunteerism, and professional goals. He would be both proud and humbled that his past accomplishments have been associated with your promising future….”

Erickson, daughter of LANL engineer G. Andrew Erickson and Gillian Erickson, secretary of the White Rock Presbyterian Church, is no stranger to Kiwanis. Her grandfather, George Erickson, was a Kiwanis member for years, and both he and Jenna’s father have helped with the Kiwanis Fourth of July Fireworks again and again.

Pongratz introduced Erickson by saying that she “has been working with the United Way Youth Team for many years.”

She plans to attend the University of Utah this fall, majoring in ballet and humanitarian aid.

The fifth and final scholarship winner, Luke Kachelmeier, will be honored during the noon meeting of Kiwanis on Tuesday, June 16.

Kachelmeier is the recipient of the scholarship awarded each year in memory of the late Rep. Jeannette O. Wallace, a long-time Kiwanis member. Her son, Terry Wallace, is expected to attend the ceremony.

Kachelmeier is the son of Brian and Andrea Kachelmeier. His father is pastor of Redeemer Lutheran Church, where Luke is active in community service efforts.

Luke Kachelmeier has been a junior class representative and vice president in Key Club, and a fundraiser for the United Way Youth Team. He is an outstanding soccer player; he plays viola in the LAHS orchestra; and he has worked as a student intern at LANL.