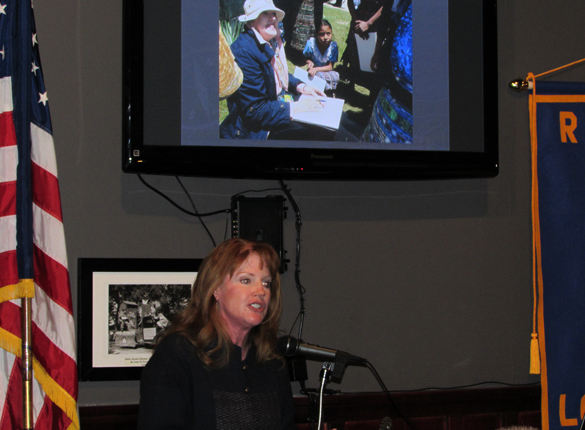 At Tuesday’s meeting at the Manhattan Project, Rotarian Deborah Simon updates the local club on a project that provides clean water to rural villages in the highlands of Guatemala. Photo by Kirsten Laskey/ladailypost

Sitting on top of a mesa with nothing but canyons surrounding it, Los Alamos can feel a little isolated from the world; but believe it or not, this small town impacts not only neighboring cities but also countries.

For instance, the local Rotary Club is helping to bring a positive impact in another secluded part of the world – the highlands of Guatemala.

During the Rotary Club of Los Alamos regular meeting Tuesday at the Manhattan Project, Deborah Simon of the Rotary Club of Santa Fe updated club members about a water project that provides small, rural villages in the highlands of Guatemala with clean water. The Los Alamos Rotary Club is among several contributing to the Rotary International grants that funds the project.

The grants fund the construction of spring boxes and pipe lines that feeds river water to a de-chlorination tank. The tank treats the water before the water enters households in the villages. There is also an education variable. Residents are taught proper hygiene such as hand washing.

This is not a charity grant; the villages are also active participants in bringing clean water to homes. Women often teach the hygiene classes while the men work on the construction of the water infrastructure.  Village governments also need to contribute financially to the project.

Simon thanked the local club for its support.

“Your club has been outstanding in the support of the (international) project,” she said.

She explained the Guatemalan villages that ask for assistance need to be able to support the water infrastructure in both its operation and in finances. Financially supporting the water system is usually done through charging households for usage, Simon said. The fee is typically 50 cents and there are penalties for those who do not have pay-the water gets turned off to their house for a month.

Looking at the next project, Simon described it as “exciting.” The water system will extend to three villages.

“It’s the biggest grant our coalition has ever done,” she said.