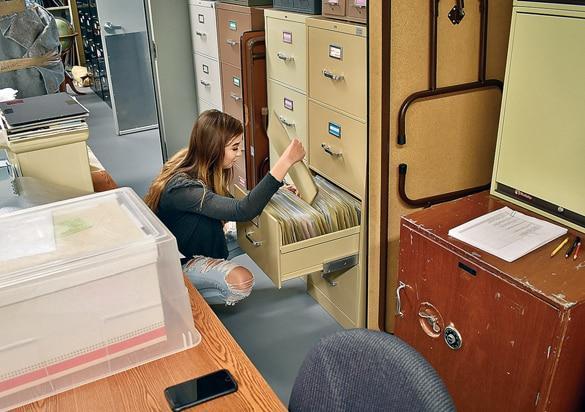 Los Alamos High School graduate Kallie Funk’s summer job as an intern for the Los Alamos Historical Society gave her the opportunity to research Cold War history in the society’s archives, a topic that is a good fit with her college major, political science. Courtesy photo

I was born and raised in Los Alamos. My mom was as well, so I have always thought I knew everything there was to know about Los Alamos and its history.

I began my research in June, and I have since been exploring a range of components of the town’s history, including leisure, civil defense, race relations, religion, education, and family life. While Los Alamos history is incredibly rich overall, some particular stories and elements of living in Los Alamos during the Cold War really struck me.

One of my favorite discoveries was a story from 1965. Twenty-two young girls in Girl Scout Troop 159 were told they would be going on a camping trip in Guaje Canyon; instead, their “campout” was in one of the Los Alamos fallout shelters. The girls spent 26 hours in the shelter as a “challenge of emergency preparedness.”  As such, they could only have food, water and other necessities that were already in the shelter.

One of the girls was quoted as saying, “The food is just plain terrible. I thought they were trying to keep us alive, but the food makes you feel like they’re trying to kill you or starve you or something.”

If you hike often in Los Alamos, chances are you’ve seen “Danger” signs posted at trailheads, warning of the possibility of “unexploded ordnance in area.” While it is unlikely (though possible) that you will come across unexploded munitions these days, such was not the case in the 1950s.

As many Los Alamos natives know, high explosives were tested in and near Los Alamos, and some explosives didn’t detonate and were left there. Children would sometimes find the unexploded ordnance and play with it. Unfortunately, this led to incidents involving accidental detonations of live bazooka and mortar shells and life-threatening injuries.

While the stories of these explosions are well known in the community, they really struck me. In my short lifetime, Los Alamos National Laboratory has been strictly regulated, so it is strange for me to think about a time when there were fewer regulations regarding such tests and their consequent waste.

On the other hand, this is the same place where the Lab, understandably not knowing any better at the time, simply disposed of radioactive waste in a canyon until 1953.

I read another story about four boys who snuck into a fenced off area with signs warning “Danger– Contaminated–Do Not Enter” and proceeded to play with their boats in a radioactive pond. I study political science at the University of California, San Diego, so local politics in Los Alamos and the impact on national nuclear policy have been of particular interest to me.

It excited me to learn that there was never legal segregation in Los Alamos because the Atomic Energy Commission (AEC) barred Jim Crow.

The AEC also owned all of the homes in Los Alamos in the post-war years, which irritated a lot of residents, but it significantly mitigated housing discrimination against minorities.

Moreover, Los Alamos had a large impact on national politics in the realms of civil defense, nonproliferation, and the use of atomic energy.

Captivating stories of Cold War Los Alamos history are endless, and my research this summer has allowed me to make only a small dent in everything there is to know.

This internship has still been fascinating, and I hope you enjoy these tidbits of Los Alamos history as much as I do!