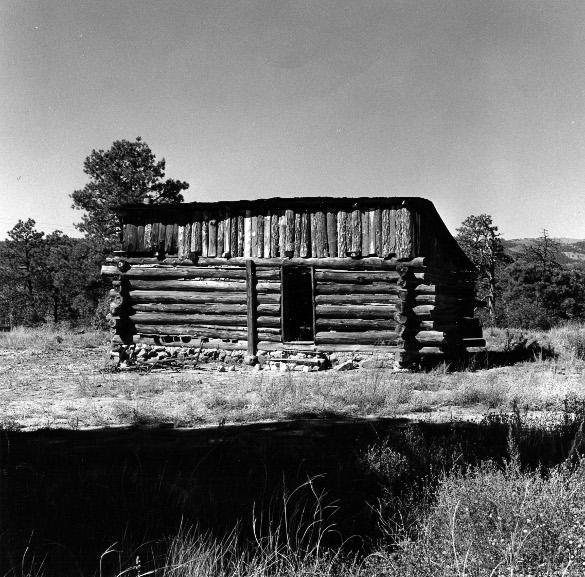 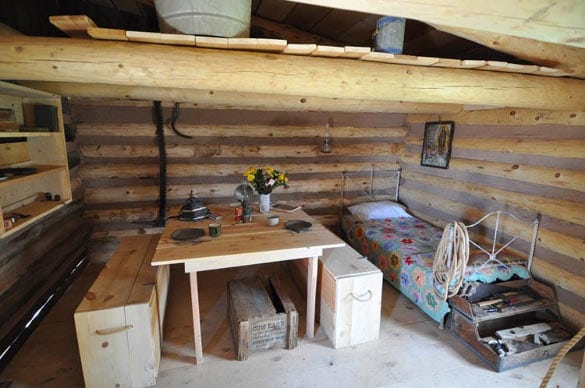 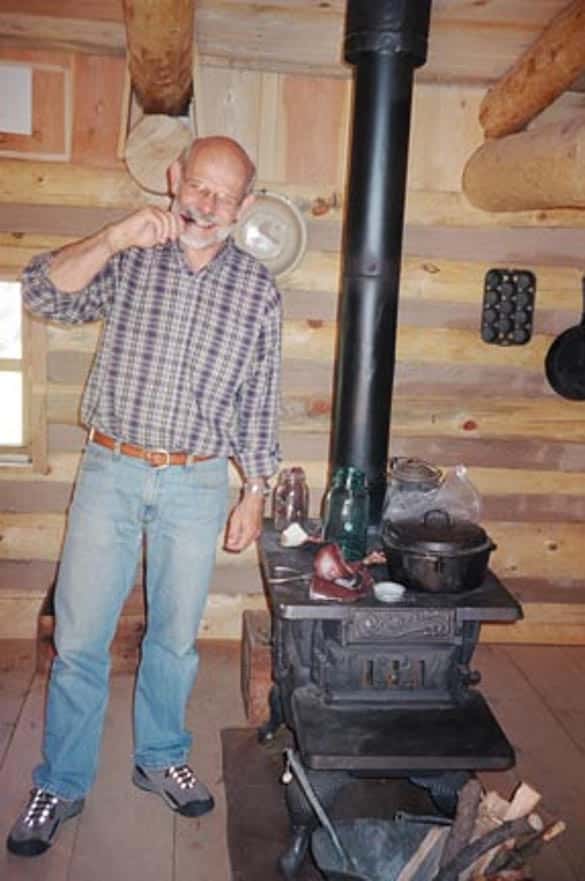 Local historian Gerry Strickfaden working on the wood stove in the Romero Cabin. Courtesy photo
LOS ALAMOS HISTORICAL SOCIETY News:
One of the charming sites in the Los Alamos Historic District is the Romero Cabin, a log structure originally built in 1913. The building has not always been in that location, though.
When it was first constructed, it was two mesas to the south on land that is now occupied by Los Alamos National Laboratory’s Technical Area (TA) 55. According to a report by Ellen McGehee, historic properties manager at the lab, an expansion of facilities at TA 55 in the 1980s precipitated the cabin’s move.
“In addition to the relocation and restoration of the cabin, an extensive data recovery project was completed. This included historical research, photographic documentation, mapping, controlled excavation, and artifact collection,” McGehee wrote.
The cabin’s history is rich, and its current location gives the Los Alamos Historical Society the opportunity to share with visitors the stories of homesteading on the Pajarito Plateau.
According to McGehee’s report: The Romero family consisted of Victor and Refugio Romero and their six children. Victor filed homestead entry papers in 1916, in which he stated that his house was built in June 1913 and that it had one room and two windows.
He also said that he had a corral and that the claim was fenced on three sides. The Romero family was typically absent from the land during December through March. In those winter months the family lived in the valley at San Ildefonso.
The cabin was rebuilt in 1934 with a major transformation from a v-pitch to a shed style roof. The cabin’s interior was roughly furnished with a homemade table, benches, and shelving. Pot and pans were hung on the walls and the stove was located in the northwest corner of the cabin. A small garden for family use was located behind (to the north of) the house.
The Romeros had cows for fresh milk, and hogs, chickens, and horses were kept on the land. Food stuffs, mostly canned, were bought from the Los Alamos Ranch School store, which had high prices, or stores at San Ildefonso and Buckman. The latter towns were located in the valley at a considerable distance from the Romero homestead, but were ”on the way” from their year round home in San Ildefonso.
Water was not readily available on the mesa top and was hauled up in barrels from the bottom of a nearby canyon. Victor’s father, a partero or male midwife, owned a larger homestead to the east of the cabin site with a large souterano or underground storage area, a rock-lined cistern, and a large corral. Many of the Hispano homestead families on the Pajarito Plateau were related by marriage and there was a network of trails that connected the neighboring properties, often leading from mesa to mesa.
The seasonal occupation of the Romero homestead lasted for approximately 30 years until 1942 or 1943, when the United States government appropriated the land for the Manhattan Project.
Twice in the 1960s, local Boy Scouts did restoration work on the cabin but they did not change its form considerably. Dendrochronological data gathered from the cabin’s original logs support the three periods of renovation. The tree-ring dates cluster around 1934, 1961, and 1966, with one 1913 date.
After sitting empty in the Historic District for twenty years, with a lawn sprinkler watering the back wall, the cabin nearly collapsed. It was rebuilt in 2010 with a grant from the National Park Service. At that time, three retired engineers from the lab worked with Victor Romero’s grandsons to fully interpret the cabin, recreating the interior as the Romeros had it so that visitors can step back in time more than 100 years.
The cabin is open for visits in the summer on Monday mornings and other days as volunteers are available. It can also be seen during the History Museum’s regular walking tours at 11 a.m. Monday through Saturday. Anyone interested in volunteering at the cabin should contact the Museum’s volunteer coordinator, Todd Nickols, at museumshop@losalamoshistory.org.
To learn more about Victor Romero, his family, and homesteading on the plateau, join the Los Alamos Historical Society at 7 p.m., May 8 in Fuller Lodge, when historian Judy Machen will discuss the differences between Romero’s homestead and that of H.H. Brook, whose farm was where Fuller Lodge now stands.
Menu
Los Alamos
41°
Fair
7:01am4:51pm MST
Feels like: 39°F
Wind: 3mph E
Humidity: 30%
Pressure: 30.15"Hg
UV index: 0
MonTueWed
48/34°F
46/30°F
48/32°F
Weather forecast Los Alamos, New Mexico ▸