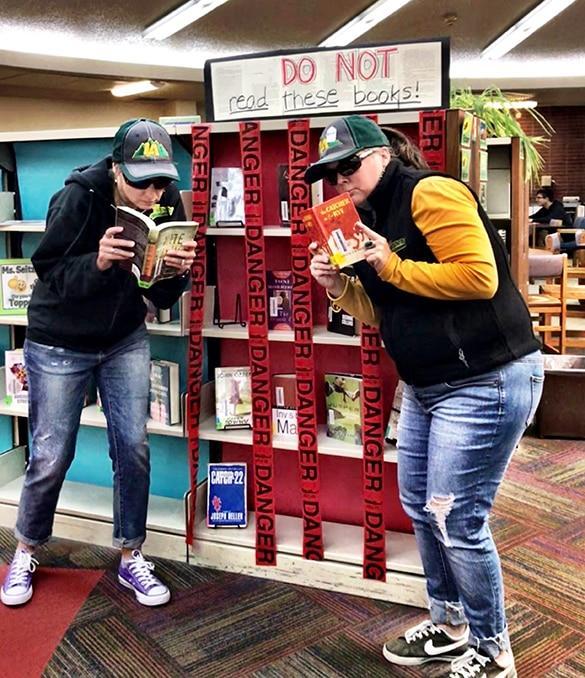 Topper Librarian Shannon Seitz and LAHS Student Placement Specialist Susan Segler came up with the idea of the reading marathon. They were inspired by the virtual read-out proposed on the American Library Association website. Courtesy/LAHS

“Stand for the Banned and the Freedom to Read” was the motto last week in the Los Alamos High School Topper Library as students, staff and administration read books that have been challenged nationwide.

According to Topper Librarian Shannon Seitz, “There were 250 participants who together logged 93 hours and 45 minutes of time reading challenged and banned books during the week.”

According to the American Library Association website, books are still being banned and challenged today. A challenge is an attempt to remove or restrict materials, based upon the objections of a person or group. A banning is the removal of those materials.

While books have been and continue to be banned, part of the Banned Books Week celebration is the fact that, in a majority of cases, the books have remained available. This happens only thanks to the efforts of librarians, teachers, students and community members who stand up and speak out for the freedom to read.

“From lists published by the American Library Association’s Office for Intellectual Freedom, we identified 90+ titles in our collection that have been challenged nationwide,” Seitz said. “We put those titles on display for students and staff to choose to read.”

There were classics such as John Steinbeck’s Of Mice and Men, William Golding’s The Lord of the Flies, and Ralph Ellison’s Invisible Man as well as more recent young adult literature such as Rainbow Rowell’s Eleanor & Park, Stephen Chbosky’s The Perks of Being a Wallflower, and John Green’s Looking for Alaska. Nonfiction titles, including The Spoken Word Revolution: Slam, Hip-Hop & the Poetry of a New Generation and Children in the Holocaust and World War II: Their Secret Diaries, were also available.

In addition to reading banned books, students in the Creative Writing class taught by Ildiko Nadaskay-Goeller completed a censorship project related to the books they chose to read during Banned Books Week, which they presented in the library. The students shared poetry, essays and short stories they had written.

Banned Books Week was launched in the 1980s, a time of increased challenges, organized protests, and the Island Trees School District v. Pico (1982) Supreme Court case, which ruled that school officials cannot ban books in libraries simply because of their content, as noted on the ALA website.

“I was aware of Banned Books Week and wanted to provide a way for students and staff to participate at Topper Library,” Seitz explained. “The idea for the Stand for the Banned Reading Marathon was inspired by the virtual read-out proposed on the website.”

Seitz and LAHS Student Placement Specialist Susan Segler came up with the idea for their own read-out in the library with the 26.2 hour marathon goal.

“Susan’s ‘Dangerous Books’ display really piqued the students’ interest,” Seitz said. “Many asked us, ‘Why can’t we read these books?’ The display sparked a lot of conversation prior to the actual week-long marathon event.”

Students, staff and administration participated in the marathon. Some teachers even brought their classes to the library, so students could choose titles to read for a portion of their class period. Other students and staff participated on their own.

Library student assistants Alexis Garcia, Carter Noeninckx, Brooklyn Scott, Hunter Swavely and Evelyn Williams also were a big help in preparing the library for the reading marathon. They designed and created a “banned books” display for the LAHS lobby, hung up fliers, located and pulled the challenged books from the shelves, labeled them as banned and set up the informational display.

“Their efforts helped to make this event a success,” Seitz said. 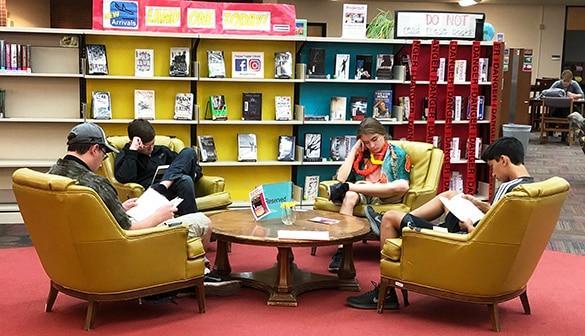 Students at Los Alamos High School participated in the Stand for the Banned Reading Marathon in the Topper Library. Participants logged 93 hours and 45 minutes of time reading challenged and banned books. Courtesy/LAHS