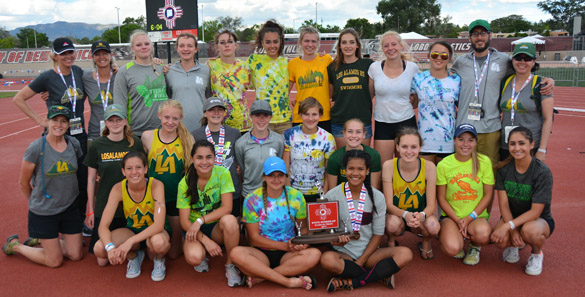 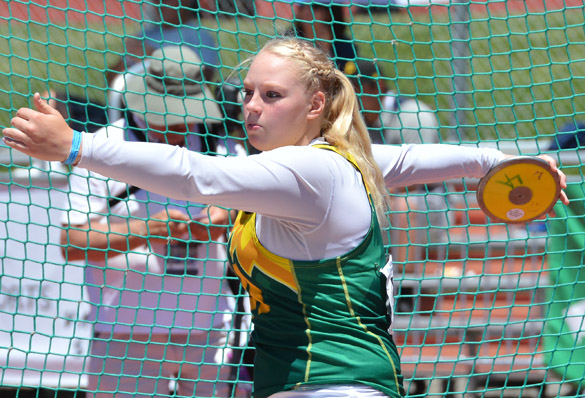 By GEORGE MORSE
Los Alamos Daily Post
In a close competition, every point counts. Every inch, every second, even every fraction of a second can mean the difference between winning and second place.
The Los Alamos High School girls track and field team learned that lesson in the hardest way at the 2017 Class 5A state track and field meet May 13 at the Great Friends of UNM track and field facilities in Albuquerque.
The final event on the final day (May 13) of the state track and field meet is the 1600-meter relay. Going into the event, the Lady Hilltoppers were leading the Alamogordo High School Lady Tigers 61.50 points to 60 points in the team standings. To secure first place, the Lady Hilltoppers needed to finish ahead of Alamogordo by at least two places, while the Lady Tigers could finish no worse than fourth and ahead of Los Alamos.
Carrying the baton for the first three 400-meter legs of the relay were Kaitlyn Bennett, Ona Gartz, and Elena Abeyta for the Lady Hilltoppers. For the Lady Tigers Sheyenne Drake, Claire Myers and Madison Varnier ran the first three legs. The two teams were battling with Del Norte High School ahead of the rest of the field.
On the anchor leg of the relay, sophomore Leah Wolfsberg carried the baton for Los Alamos, while eighth-grader Justyse Martin did so for Alamogordo. Del Norte’s Malakah Martinez, who had earlier won the 400-meter dash, took over first place. The race between Alamogordo and Los Alamos was for second and third place. Coming down the stretch, Martinez crossed the finish line first. Battling down the final stretch run, Martin edged past Wolfsberg and came in second. Wolfsberg was third. The difference between Wolfsberg and Martin was just .16 seconds.
Alamogordo received eight points for finishing second, while Los Alamos got six points for finishing third. That gave the Lady Tigers 68 points, while Los Alamos finished with 67.5 points. By half-a- point, Alamogordo took first place in the team standings.
The heart-breaking finish for Los Alamos (and thrilling finish for Alamogordo) typified the often razor-thin margins between first and second place that ultimately would cost the Lady Hilltoppers the title.
On the first day of competiton (May 12) in the first event for the Lady Hilltoppers, senior Elizabeth Lockhart was oh-so- close to winning the long jump. She had a leap of 18 feet, 4 inches in her second attempt. Roswell High School’s Anastasia Daliege had a leap of 18 feet, 5 inches on her second attempt.
Despite four more jumps by each athlete, that’s the way they finished with Daliege claiming first place by one inch. Lockhart’s teammate Abeyta finished third in the long jump, as well.
Los Alamos finished the first day of competition with 19 points. In addition to nine points scored in the long jump, Rebecca Green finished third in the discus and Zoe Challcombe took sixth. Zoe Hemez finished second in the 3200-meter run.
In the first running event on the final day of competition, the Lady Hilltoppers battled Del Norte in the 400-meter relay. With Martinez running the anchor leg for the Lady Knights, Del Norte crossed the finish line first with a time of 46.92 seconds. Los Alamos’ team of Sophie Wood, Gartz, Lockhart and Abeyta took second just .06 seconds behind the Lady Knights in 46.98 seconds. Lockhart suffered another heart-breaking defeat in the triple jump. Roswell’s Kaitlyn Holl took first place with a leap of 36 feet, 2 inches on her sixth and final attempt. Lockhart, who had leapt 36 feet, 1.25 inches on her second attempt, had the heartbreak of fouling on her final two attempts and had to settle for second place by .75 inches. Wood finished fifth in the triple jump.
The decisive .5 points came into play in the high jump. Los Alamos’ Jasmine Tuning and Aztec High School’s Hailey Funk tied for fifth place. Both cleared 5 feet, but neither could clear 5 feet, 2 inches. They split a total of 3 points, so each received 1.5 points.
The Lady Hilltoppers picked up points in other events on the final day of competition. Green took first in the shot put with a heave of 37 feet, 6.75 inches. Challacombe took sixth in that event. Los Alamos’ 800-meter relay team of Emily Mercer, Jillian Bennett, Lockhart and Gartz took fourth place.
The Lady Hilltoppers’ 1600-meter medley relay team of Lockhart, Wood, Tuning and Madeline Beck took third place.
Abeyta took third place in the 400-meter dash. Hemez added a sixth-place finish in the 1600-meter run. Jillian Bennett finished fourth in the pole vault to add to the Lady Hilltoppers total of 67.50 points. There were still smiles as the Lady Hilltoppers posed for photographs with their second-place trophy.
The smiles were tinged with a little sadness. 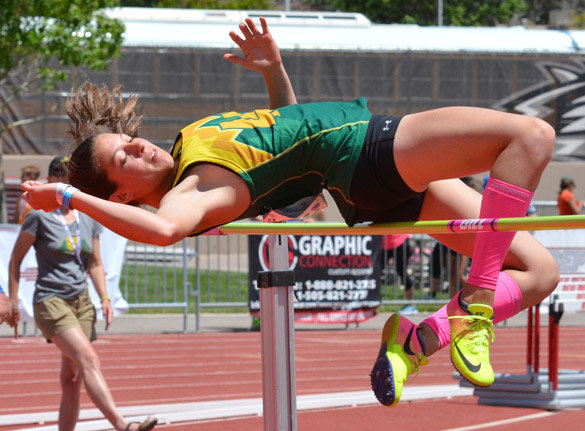 Freshman Jazmine Tuning tied for 5th in the high jump with a leap of 5′. High jump coach Christie Kelly assists with a little body english in the background. Photo by Blake Wood 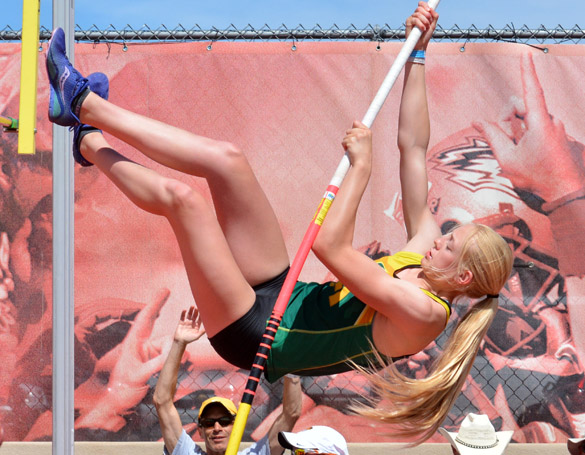 Sophomore Jillian Bennett placed 4th in the pole vault with a jump of 9′. Photo by Blake Wood 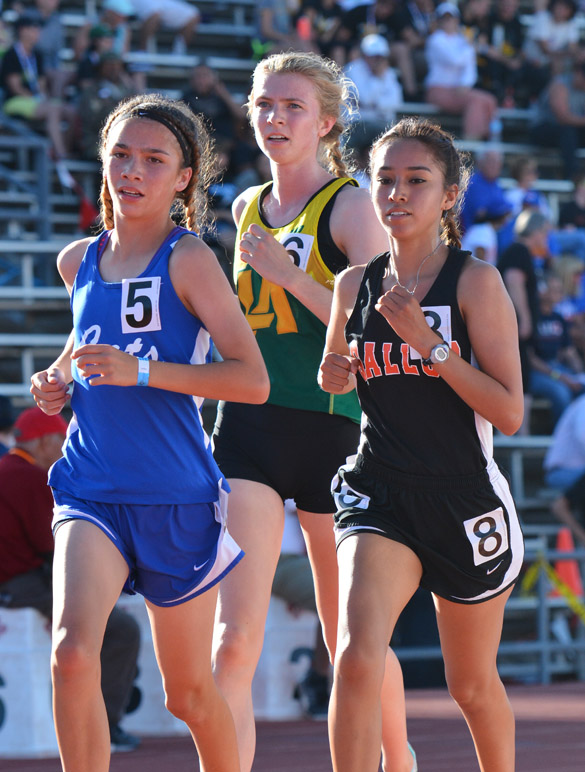 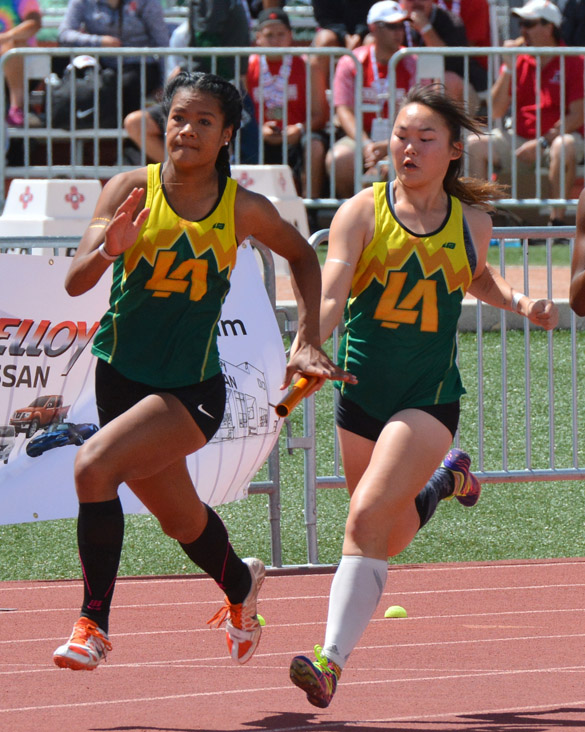 Sophie Wood completes the handoff to Ona Gartz in the 4×100 m relay, in which the Los Alamos girls placed 2nd in a time of 49.68 seconds. Photo by Blake Wood 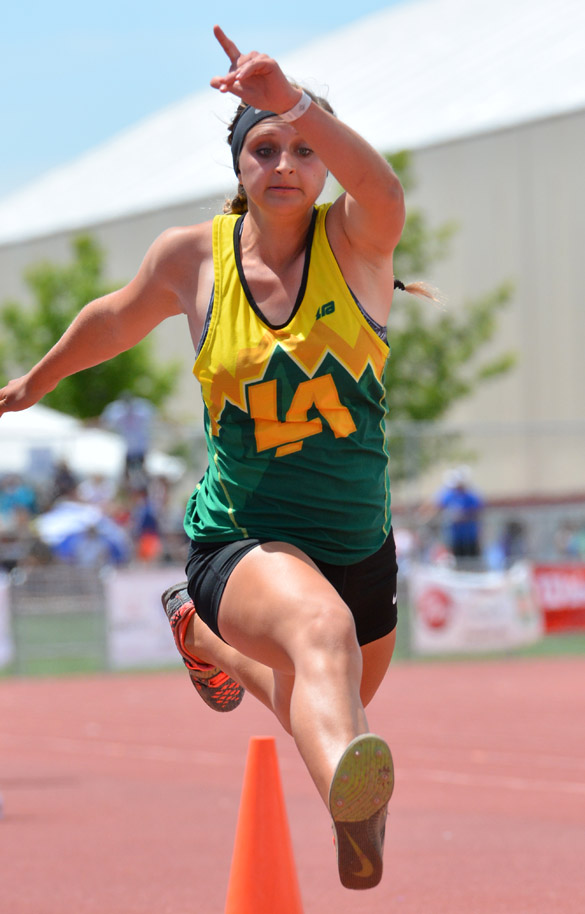