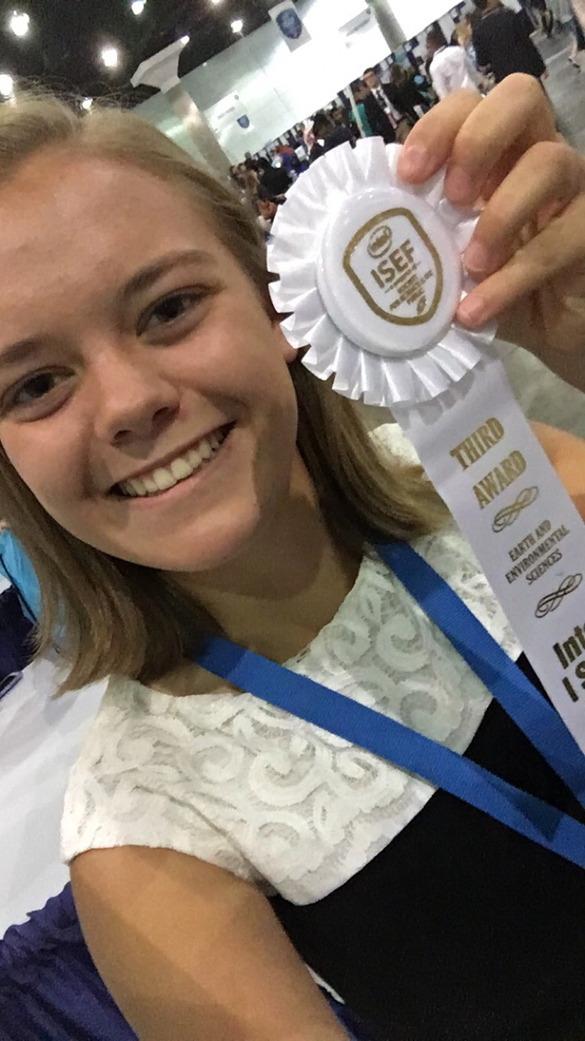 Los Alamos Topper Academy freshman Lillian Petersen competed May 14-19 in the Intel International Science and Engineering Fair (ISEF) in Los Angeles, Calif. Petersen received a third place award for her project in the Earth and Environmental Sciences category. The title of Petersen’s award winning project is, America’s Farming Future: The Impact of Climate Change on Crop Yields. Petersen was awarded a $1,000 scholarship by Intel.

Also competing at the Intel ISEF were LAHS juniors Sophia Li, Priyanka Velappan and Alex Ionkov. The four Los Alamos students and their adult sponsors won all expense paid trips to the competition.

More than 1,700 promising young scientists, engineers and mathematicians gathered in Los Angeles, where they participated in the world’s largest pre-college science competition, the 2017 Intel International Science and Engineering Fair.

These young innovators represented the best of more than 7 million high school students who participated in science fairs around the globe during the past year, and won top honors at local, regional and national science competitions. For many of these high school students, the week in L.A. was a life-changing event. Some ventured far from home for the first time – a few travelling as far as halfway around the globe – where they were exposed to different cultures and interacted with people from a wide range of backgrounds.

Many had their first opportunity to interact with and learn from college professors, distinguished professionals and even Nobel laureates in their fields of interest. All discovered that despite superficial differences, they have much in common with like-minded peers who share a passion for science, technology, engineering and math.

Plus, every finalist had the chance to compete for more than $4 million in prizes and scholarships as they presented original research projects – including breakthrough technologies and potential solutions to some the world’s most vexing problems – to esteemed judges.

Throughout the week-long event, participants attended a range of talks and symposia on STEM subjects. Highlights included an opening rally featuring keynote speaker Manu Prakash, the Stanford bioengineering professor known for developing the Foldscope and Paperfuge, two low-cost scientific devices made from simple components, such as paper, string and plastic, for use in the developing world.