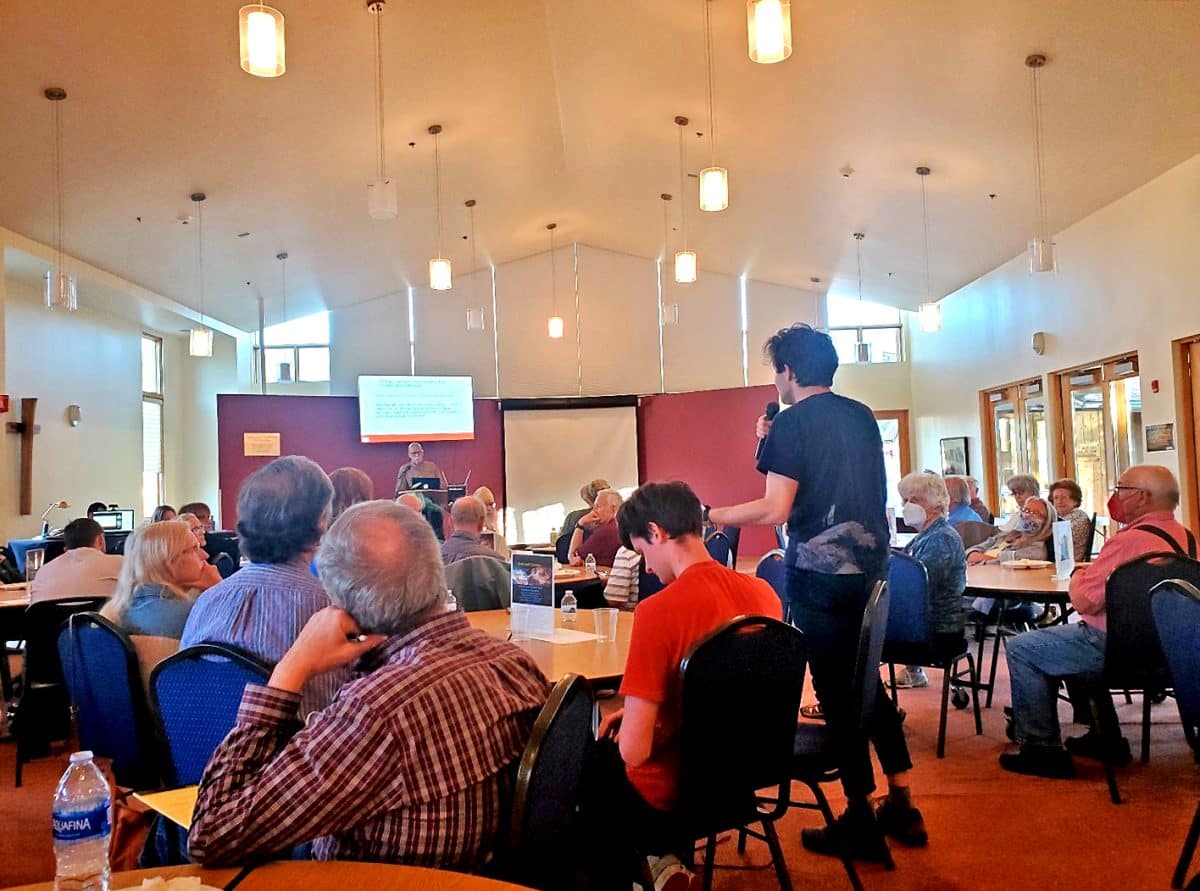 An audience member asks a question of Professor Marty Hewlett during his lecture Wednesday at the Los Alamos Faith and Science Forum in Kelly Hall at Trinity-on-the Hill Episcopal Church. Courtesy/LAFSF

Professor Hewlett began by identifying three ways of seeing and knowing – through science, philosophy, and theology. Biology before Darwin had static ideas of species. With Carl Linné and “System Naturae (1735)” biology moved towards quantification, but it still assumed that species are unchanging.

He then identified a number of “natural philosophers” that influenced Darwin to include William Paley, Erasmus Darwin, Charles Lyell, Jean Baptiste Lamarck, and Thomas Malthus. Based on his observation and these influences Darwin had his bold hypothesis: Descent from a common ancestor, Natural selection, Variation/modification/adaptation, breeding with limited environmental resources, deep time, extinctions, and species defined morphologically. Most scientists of the day accepted that evolution did occur, but the mechanism was not convincing. Recall that the work of Mendel was not known to Darwin.

Professor Hewlett then introduced the Neo-Darwinian Synthesis. It was born of contributions from several fields Darwinian evolutionary theory, Mendelian genetics, and population genetics. In the Neo-Darwinian Synthesis. small genetic changes (mutations) within population gradually accumulate and become the substrate for natural selection. This “modern synthesis” became the over-arching paradigm for biology. It was effectively promoted by Sir Julian Huxley with his book “Evolution: The Modern Synthesis” (1942).

Moving from the science of evolution Professor Hewlett discussed changes in the philosophical assumptions of biology. He identified the role of the Enlightenment and the rise of Naturalism/Reductionism. This led to the modern evolutionary materialists Richard Dawkins, Daniel Dennett, and Edward O. Wilson.

Next, he spoke of the perspective from theology and science versus theology. This led to scientific creationism and Intelligent Design. He pointed out that the US supreme court ruled that these are not science because they cannot be tested.

Professor Hewlett ended by describing theistic science which he called the future of the conversation.  The key aspect of it is that God acts through what Aquinas called “secondary causes”. He described what Teilhard de Chardin called “Unfinished Creation”: We’re not done yet!

Next Wednesday, June 8 at 6 p.m. at Kelly Hall former LANL scientist John Ambrosiano will speak on “The Science of Buddhism”. This talk will give a brief summary of how Buddhism came about, and then explore the parallels between empirical Buddhist thought and principles of modern psychology and physics.

More information can be found at www.losalamosfaithandscienceforum.org. Join the Zoom meeting at https://us02web.zoom.us/j/84567890081?pwd=-BC9PuySlP7_6aL0R2ecinNogJ3Krz.1