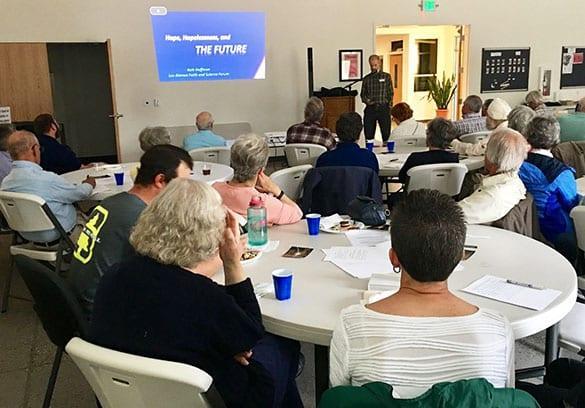 Nelson Hoffman presents the next talk in the Los Alamos Faith and Science Forum summer series Wednesday, July 18. The title of Hoffman’s talk is “Can Organisms Drive Their Evolution?”. The theme of the 2018 Summer Series is “Purposeful Evolution”.

A growing group of researchers within evolutionary biology seeks to put new emphasis on a set of ideas that differ considerably from the gene-centric viewpoint of Neo-Darwinism. In the Neo-Darwinian view of evolution (i.e., adaptation driven by random mutation coupled with natural selection and genetic drift), organisms are the passive products of their genes and environments.

But the new emphasis elevates the organism to a position of active participation in the evolution of its species, recognizing phenomena such as phenotypic plasticity (the ability of an organism to change its form, behavior, or physiology in new surroundings without any change at all in its genes, which may follow along later); gene transposition (“jumping genes”, the process of large-scale reorganization of the genome, perhaps driven by the cell in response to stress); niche construction (whereby organisms indirectly drive their evolution through modifications they produce in their environment); and inclusive inheritance (the recognition that traits pass from parents to offspring not through genes alone, but through ecological effects, social learning, parental effects during development, and epigenetics – the switches that turn genes on and off).

Just how important these phenomena have been during evolutionary history remains an open question, while Neo-Darwinian processes unquestionably play a large role. But for now, the new emphasis is stimulating much research into new directions. It may also make it philosophically appropriate to ask what the organism wants or intends – a question which is of no interest in the Neo-Darwinian view.

The main goal in this summer’s Los Alamos Faith and Science Forum lectures is to bring our community up to date on the latest views about evolution. The meetings will follow the usual format: light supper at 6 p.m., talk at 6:30 p.m., followed by questions for the speaker and then table discussions. These talks will be in the Fellowship Hall of the Unitarian Church at 1738 N Sage Loop in Los Alamos.

Hoffman is a physicist working at Los Alamos National Laboratory, in the computational plasma physics group. He specializes in computer simulations of laser fusion capsules and analysis of data, for experiments conducted at the National Ignition Facility at Lawrence Livermore National Laboratory and the OMEGA laser at the University of Rochester. He obtained his bachelor’s degree in physics from Rice University and his PhD in astrophysics from the University of Wisconsin. He is a member of First United Methodist Church of Los Alamos.

The Los Alamos Faith and Science Forum (LAF&SF) is an incorporated 501(c) 3 nonprofit organization seeking to understand faith and science and how they fit together. The website is www.lafsf.org.