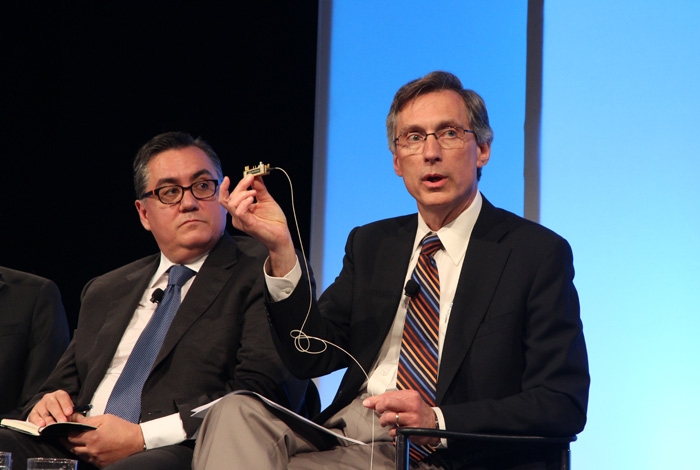 “If you look back at the last year, there were several hundred attacks on critical infrastructure,” McMillan said, addressing attendees at the Deloitte Energy Conference near Washington, DC. “More than 40% of those attacks were on the energy sector.”

Resilience and reliability of the electrical grid have become key energy security concerns at the Laboratory and are important focus areas in global security. Experience with massive amounts of data, complex systems and security technology involved in nuclear weapons research are now providing insights for grid security, McMillan said.

“In the time it takes me to say this sentence, the external firewalls of Los Alamos will be challenged hundreds of times by adversaries. Our systems, and yours, are very attractive,” McMillan said. “But encrypting control signals on the grid is particularly challenging because any encryption scheme must be able to meet competing standards for very rapid response and high security.”

McMillan showed a Los Alamos device called a QKarD that uses principles of quantum cryptography to send secure signals at the speed of light. Single photons are used to produce secure random numbers between users, and these random numbers are then used to authenticate and encrypt the grid control data. QKarD was successfully tested recently at the University of Illinois to send signals between grid components separated by more than 12 miles of optical fiber.

Securing grid control systems with quantum cryptography would make them far less vulnerable to those attempting to interfere with signals between generators, control centers and substations.

For more information on QKarD:

The work has led to 27 U.S. and foreign patent applications and the Lab’s Technology Transfer Division is receiving inquiries from companies within the electric-grid control industry.