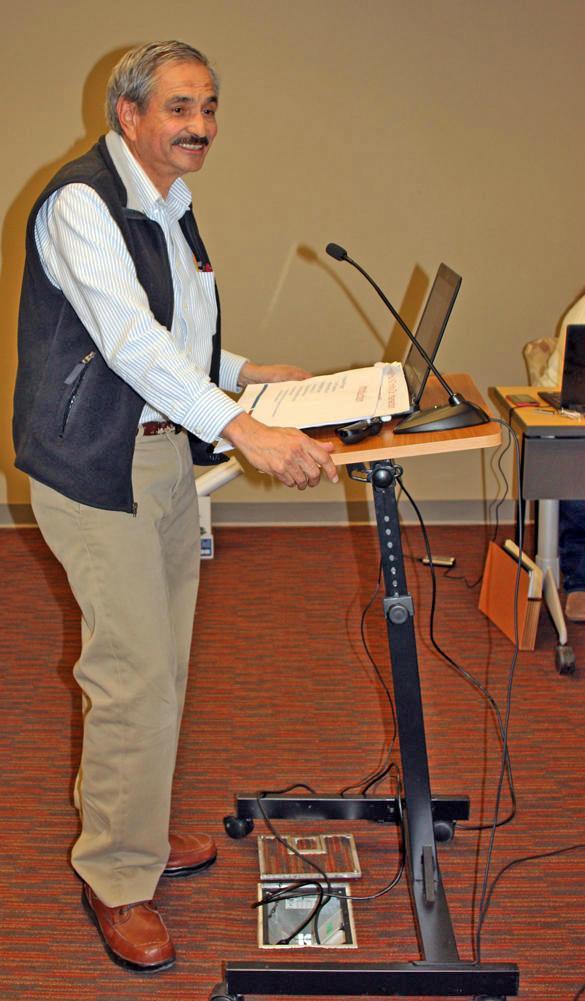 An apartment complex, tentatively called the Hill Apartments, is being planned for a parcel of land at 35th and 36th streets along Trinity Drive, east of Los Alamos Medical Center.

The plan is for the complex to feature 149 units, ranging from studio to three-bedroom apartments. While this project would help with local demand for more housing, it also would impact traffic along Trinity Drive.

How to effectively address that traffic issue was discussed during the Jan. 3 Transportation Board meeting. Michael Gomez and Bernadette Scargall with Santa Fe Engineering made a presentation regarding traffic near the apartment complex and the board offered input on the presentation.

Public Works Project Manager Sarah Anderson explained that Santa Fe Engineering is contracted by LAH Investors, LLC, which is in the process of purchasing the land for the apartment complex. The engineering firm’s scope of work is to look at geometric improvements and conduct a traffic study to support the planned development, she said.

Gomez said the hope is to “come up with something everybody would accept.”

A traffic signal study was performed, and the results do not support installation of a signal at this time. Looking at the traffic counts and expected traffic generated from the site, Gomez said, “basically for 149 apartments units we do not meet warrants at that location for a traffic signal.”

Board member Julie Bennett pointed out that in the 1980s, there was a traffic signal at this location. Public Works Director Philo Shelton said the usage has changed.

“It just has to do with what the uses are and what it supports,” he said.

“One thing I wondered is what would be the impact of that access to the hospital (the parking lot on the east side) if it was actually cut off and people accessed the hospital parking lot via this new intersection you want to create,” she said.

Wheeler went on to say she wasn’t sure if this was even possible “but to me this ought to be considered at this design stage.”

County Engineer Eric Martinez said it is possible but is challenging due to topography, would require participation from the hospital, and have a significant cost.

Board member David Schiferl voiced his support for Wheeler’s suggestion and encouraged looking into it further.

Regarding geometric improvements, Gomez said there is very little traffic currently at this location.

“So, the goal is to relocate 35th on the south side to line up with 36th. To move it over so it becomes a four-way intersection … that alone will improve safety right there,” he said.

As far as public transit, Gomez said they do want to include a transit stop at this relocation. The County has asked to look into a bus pull-out.

For pedestrians, Gomez said since a traffic signal is not currently an option, a beacon system is being considered. Pedestrians would press a button, which would stop traffic and allow them to cross Trinity Drive.

In looking at the entire project, Wheeler offered a more “out-of-the-box” recommendation. She asked whether from Oppenheimer to the hospital the road could turn into two lanes, one in each direction, and create a middle turn lane or “suicide lane.”

Gomez said Wheeler touched on a national trend. “It’s called a road diet. You put the road on a diet. Where you had four lanes before you narrow it down to three lanes, you add enough space for pedestrians and bicyclists and everything else.”

Pursuing this option and whether it would be practical for this particular section of Trinity Drive would require more study.

Schiferl suggested looking further into the “road diet” as well as offering space on the road for bicyclists.

Gomez said their work is being done in accordance to the state’s requirements for highways because Trinity Drive is owned by the New Mexico Department of Transportation—any proposed improvements would ultimately require the Department’s approval.

The project started in October and Gomez said the hope is to have the final design by the spring. The closing for the land sale is expected to occur mid-year.