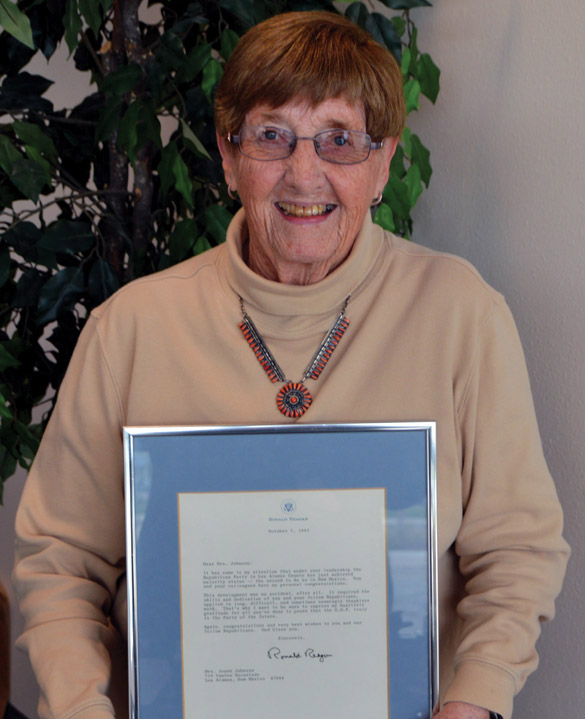 Longtime Republican Party leader JoAnn Johnson of Los Alamos holds the letter she received from President Ronald Reagan in 1987 congratulating her on her efforts toward creating a Republican majority in Los Alamos County. Photo by Carol A. Clark/ladailypost.com

President Ronald Reagan wrote a letter to longtime state and local Republican Party leader JoAnn Johnson of Los Alamos in 1987, congratulating and thanking her for her efforts toward gaining a Republican majority of registered voters in Los Alamos County.

“I was surprised to receive the letter from President Reagan and really appreciated it,” Johnson said. “We worked very hard to achieve that majority status and I thanked all those who came before us, solidly setting the groundwork.”

In his letter to Johnson, dated Oct. 7, 1987, Reagan wrote, “It has come to my attention that under your leadership, the Republican Party in Los Alamos County has just achieved majority status – the second to do so in New Mexico. You and your colleagues have my personal congratulations.”

Reagan went on to say, “This development was no accident, after all. It required the skills and dedication of you and your fellow Republicans, applied in long, difficult and sometimes seemingly thankless work. That’s why I want to be sure to express my heartfelt gratitude for all you have done to prove that the G.O.P. truly is the Party of the future.”

Johnson recalled that Lincoln County was the first in New Mexico to achieve Republican majority status. She also spoke of her involvement in politics after moving to Los Alamos in 1963 when her husband Jim transferred from the Nevada Test Site to Los Alamos Scientific Laboratory. She raised their children Jan and Mike before getting active in the Party. She was elected chair of the Los County GOP in 1987, serving a collective nine years in that position. She went on to serve as first vice chair at the state level, vice chair of the 3rd congressional district and in 2004-2005 was president of the New Mexico Federation of Republican Women. Johnson also has attended three Republican Presidential Conventions. Her most recent local position was as RPLA Central Committee secretary under Chairman Robert Gibson.

The GOP majority in Los Alamos stood for 29 years but has recently shifted to the Democrats.

Chair Robyn Schultz of the Democratic Party of Los Alamos spoke about the local shift.

“I believe a turnaround began in 2010 in which Democrats became very active after Stephanie Garcia Richard came within 200 votes of a 20-year Republican incumbent,” Schultz said. “That really re-energized our Party. Also, the Democratic Party of New Mexico has recognized Los Alamos County as one of the bright spots in the state from the 2014 election, which was a difficult election for many Democratic candidates throughout the state and country … but our state representative won re-election quite soundly. Now we have a majority on the County Council as well.”

“Nationally the trend over the past number of years has been a more or less steady movement of registered voters from the Republican and Democrat parties to ‘Declined to State’ and Independent registration. This is reflected locally as well. It is not clear that this translates into a decrease in the number of conservative voters,” McKerley said. “The voters in Los Alamos County have a tradition of thinking for themselves and voting accordingly. We have a number of excellent candidates on both sides of the aisle and up and down the ballot. The RPLA encourages everyone to take advantage of the wonderful opportunity we have in this country to study the issues and the candidates and to vote our consciences.”

A breakdown of the local Party count obtained from the Los Alamos County Elections Office reflects 5,138 registered Democratic voters, 4,843 registered Republicans, 2,895 declined to state, and 562 other.