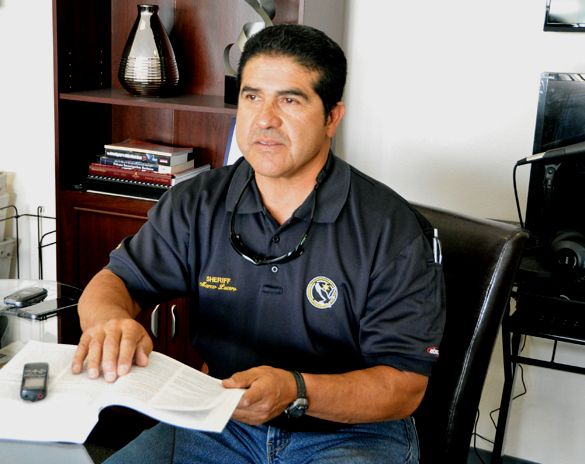 Sheriff Marco Lucero at the Los Alamos Daily Post Tuesday discussing the state statue he says makes it clear the county does not have the right to order him to fire his deputies. Photo by Carol A. Clark/ladailypost.com

By CAROL A. CLARK
Los Alamos Daily Post
Los Alamos County Sheriff Marco Lucero says he will not fire his four deputies, James Leach, John H. Horne, John L. Horne and Robert Farris, despite being asked to do so by County Manager Harry Burgess.
“Human Resource Manager Denise Cassel asked me to come to a meeting on June 22 at her office, which I did and she told me that we needed to figure out a way to ‘let them go,’” Lucero said. “I informed her that I do not intend to let them go to which she replied that in that case I needed to meet with the county manager. She set up that meeting but did not attend.”
Burgess and Chief Financial Officer Steven Lynne were at the meeting June 26 at the Municipal Building, Lucero said, adding that he made them both aware at the onset that he was recording the meeting.
“I showed Mr. Burgess the state statute that applies to every county in New Mexico,” Lucero said.
He also shared that statute with the Los Alamos Daily Post:
New Mexico Statutes – Section 4-41-5 — Deputy sheriffs; appointment and term; merit system, which states: The sheriffs in all the counties of this state shall have power to appoint deputies, who shall remain in office at the pleasure of such sheriffs; except that in counties which have established a merit system by ordinance, the provisions of the ordinance shall control the demotion and discharge of deputies and other employees of the sheriff’s office, except for one under-sheriff and an executive secretary, both of whom shall hold exempt positions.
“Mr. Burgess refused to look at it saying it is not his job to interpret the law but to do what his bosses – the county council – asks him to do,” Lucero said. “As I was leaving and after I turned off my tape recorder, Mr. Burgess asked me whether I had informed my deputies their employment was ending and I said no I have not nor do I intend to. I asked Mr. Lynne if he had anything to add and he said, ‘nope’ and that was the end of the meeting.”
Deputy County Manager Brian Bosshardt said Friday that because Lucero has refused to let his deputies go, the county has sent each deputy a letter informing them that their employment is terminated with the county effective 5 p.m. today, July 2, 2016, which is the end of the pay period.
Lucero expressed frustration during his interview with the Post, saying, “To be treated in this manner I believe is appalling. The county council voted last month to let voters decide in the November election whether to keep or do away with the sheriff’s office yet they’ve begun systematically dismantling it piece by piece … they moved our civil service duties to the police department and transferred my administrative assistant over there as well. Now they want me to fire my deputies who serve a very important purpose in my department and for the community … this is just not right.”
Lucero said his next step is to seek legal guidance to determine his path forward in this matter.
Menu
Los Alamos
66°
Clear
5:48am8:23pm MDT
Feels like: 66°F
Wind: 7mph SSW
Humidity: 33%
Pressure: 30"Hg
UV index: 0
WedThuFri
91/64°F
90/64°F
88/63°F
Weather forecast Los Alamos, New Mexico ▸