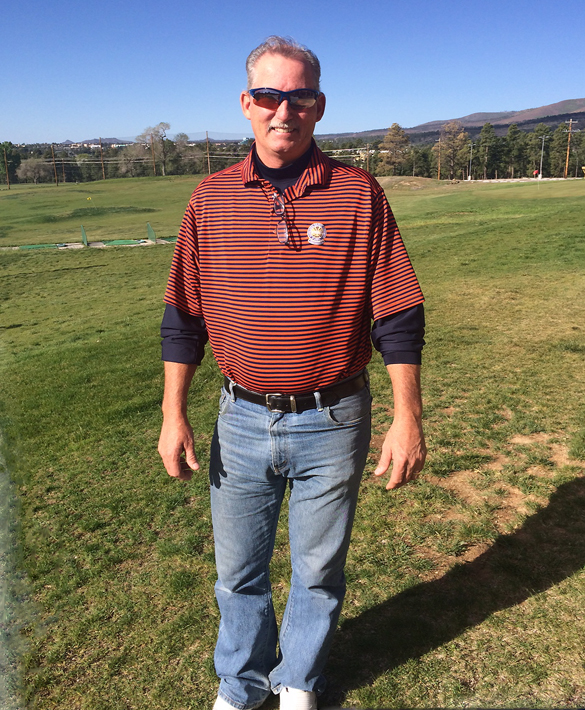 Few people retire having done exactly what they wanted to do from when they were 14 years old. Los Alamos County Golf Club head golf professional Donnie Torres is one of those people. He retires this week after 33 years of service to Los Alamos County, all of it at the golf course.

Torres began picking up golf balls at the course when he was 12 years old. His parents were both golfers and when he was 13, his father invited him out to play golf. Torres was initially frustrated because even though he played baseball and football well, he found he couldn’t hit a golf ball.

“The next day, I went back out there and learned how to hit the ball,” he said. “It lit a fire in my belly and I knew at 14 what I wanted to do with my future.”

Pretty soon, Torres’s family moved to Wilmington, N.C. where he was the top player on his high school team during his junior and senior years, going on to play golf at the University of North Carolina for a couple of years. In 1984, at the age of 23, he returned to Los Alamos and began working the LAGC and has never left.

In 1986, Torres decided to become a professional golfer and began a rigorous three-year program, which included two PGA courses, a player ability test, and 36 months under the direction of a Class A golf professional. He passed both courses and the ability test on the first try.

Torres says people often ask him why he never went anywhere else to work.

“I knew and loved the people here so much. I was privileged to know the men and women who had been here since the 1940s, where the golf course came from and how it got to be here,” he said. “They embraced me and just never wanted me to leave.”

Torres says he raised his family in Los Alamos and that everything he has in this life is “is due to this golf course and this community”.

“I worked a lot hours and gave up my weekends and holidays. Giving back was huge for me. I worked an insane number of hours, but would do it all over again,” he said. “Now I’m going to figure out what everyone else did on weekends for the last 33 years.”

On a typical day, Torres arrives at the golf course between four and six in the morning to get caught up on paperwork because he says as soon as the sun comes up, it’s over. He has always worn many hats, and besides teaching he manages the shop, handles scheduling and helps out wherever needed, putting in many 10 to 12 hour days.

Torres says he is proud to have been involved with so many charity fundraiser tournaments throughout the years, helping to raise well over a million dollars for Los Alamos and Northern New Mexico causes. He particularly enjoyed working with the tournament coordinators, some of them for many years. The club hosts some 40 events per year.

“My wife Mary was my rock and my strength. I don’t think I could have done this without her help. She and my family understand me … they let me do my job the best I could,” Torres said.

He is looking forward to spending time with his family, being a grandfather, camping, fishing and seeing places he hasn’t seen.