Los Alamos County Council Vice Chair Ron Selvage apologized today for an indiscretion he had with a woman while on an official visit to Moscow and Sarov last September.

“I did make a mistake on the Russian trip and it’s something that I regret and that I’m going to be paying for,” Selvage said this morning. “My wife and I are working through this and we would appreciate some privacy during this difficult time.”

The mistake Selvage is referring to is an inappropriate relationship he had with Nora Arbuckle, a member of the Sister Cities Initiative who works at Los Alamos High School in the Career Resource Center. Arbuckle accompanied the group of community leaders from Los Alamos on the official visit to Sarov, Russia last September.

Arbuckle, also married, could not be reached for comment.

The visit was promoted as, “An important opportunity to renew personal relationships between the leaders in our two cities, to update our program of Sister City activities, and to continue mutually beneficial exchanges of information between representatives of our respective commercial and public service communities.”
“I don’t think this affected my duties in Sarov in meeting with the mayor and other officials there,” Selvage said.
Los Alamos County Council Chair Sharon Stover responded to the situation saying, “This news is disappointing – the County does not condone inappropriate behavior and until I have an opportunity to talk to vice chair Selvage, I will defer any further comments.”
Selvage has been a resident of Los Alamos for 15 years, and is currently a Group Leader in the Safety Basis Division at Los Alamos National Laboratory. His term on the Los Alamos County Council ends Dec. 31, 2014. 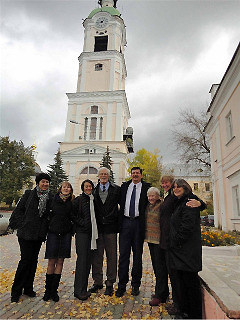