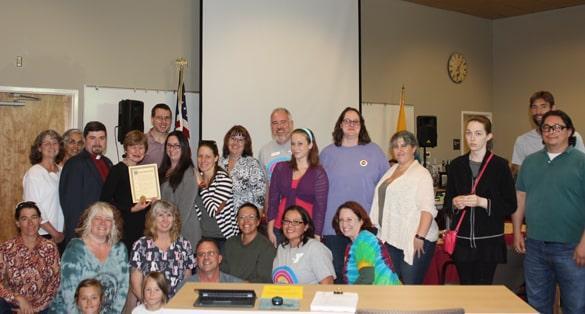 ‘Members of the Friends of Los Alamos Pride (FLAP) attended the Los Alamos County Council meeting Tuesday night to accept the proclamation, which recognizes the second week of June as Annual LGBTQ+ Pride Week. The proclamation read by Council Vice Chair Christine Chandler, was met with loud applause from the crowd. Roberta Beal of FLAP invited everyone to attend the first ever Los Alamos Pride Festival June 15 at Fuller Lodge. She thanked the County and the Council for the proclamation, saying, ‘This is a huge step forward … especially for the LGBTQ+ youth.’ Photo by Kirsten Laskey/ladailypost.com

The Los Alamos County Council presented a proclamation at its regular meeting Tuesday night at the White Rock Fire Station, which recognizes the second week of June as Annual LGBTQ+ Pride Week.

WHEREAS: Everyone has a right to live without fear or prejudice, discrimination, violence or hatred based on gender identity/expression or sexual orientation. It is imperative that everyone acknowledge and support diversity in their community – especially those communities that are most vulnerable; and

WHEREAS: June is national Lesbian, Gay, Bisexual, Transgender, Queer, Plus (LGBTQ+) Pride Month. It is desirable to bring together LGBTQ+ people and their allies to form a tangible community of support and acceptance in Los Alamos and the surrounding local areas, and to create and enhance visibility and support of diversity in our community. It is desirable to celebrate, educate and engage the community on the issues, contributions, culture and unique voice of LGBTQ+ people, and the impact LGBTQ+ people have on local and global communities; and

WHEREAS: It is essential that the LGBTQ+ youth are supported by Los Alamos County and Northern New Mexico. According to the 2015 New Mexico Youth Risk and Resiliency Survey, approximately one in seven students identified as lesbian, gay, bisexual or not sure. More than one in four of this student population had attempted suicide in the past year and were three times more likely to have been forced to have sex or experienced physical dating violence, and were twice as likely to be bullied at school; and

WHEREAS: According to “Mental Health in Lesbian, Gay, Bisexual and Transgender Youth,” published by the U.S. National Library of Medicine, visible LGBTQ+ sexuality-related social support from parents, friends, and community during adolescence each uniquely contributed to positive well-being in young adulthood, making them less likely to report depressive symptoms, substance use, and suicidal thoughts and behaviors;

NOW, THEREFORE, on behalf of the Council of the Incorporated County of Los Alamos, I do hereby proclaim the Second Week of June Each Year as

“ANNUAL LGBTQ+ PRIDE WEEK” in Los Alamos County. We urge our citizens to respect and honor our diverse community and celebrate and build a culture of inclusiveness and acceptance.