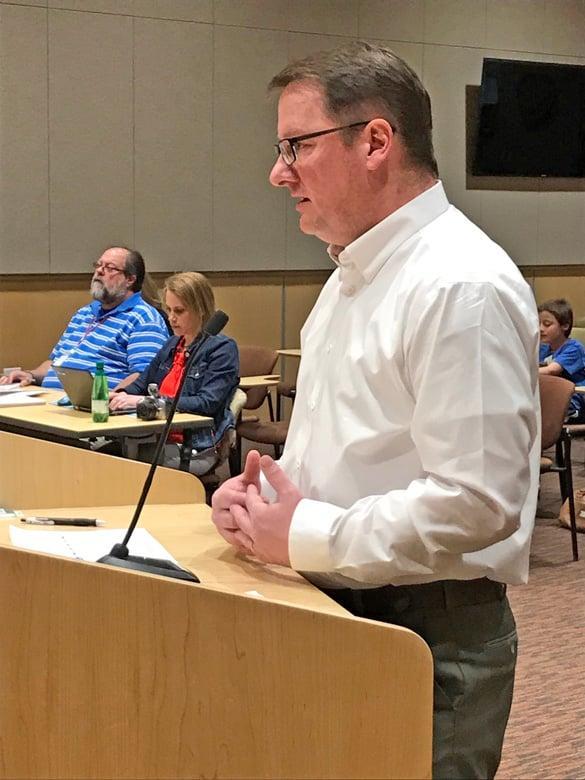 Community Development Director Paul Andrus speaks to Los Alamos County Council at Tuesday night’s meeting. Photo by Maire O’Neill/ladailypost.com
By KIRSTEN LASKEY
Los Alamos Daily Post
kirsten@ladailypost.com
Los Alamos County’s code enforcement program is getting some changes.
Two ordinances proposing amendments to the program were discussed during Tuesday night’s regular Council meeting. While one ordinance to revamp the code enforcement still awaits approval, Council did approve another ordinance.
Council passed 6-1 to extend the minimum time allowance for correcting certain code violations from two days to 14 days. According to agenda documents, the Community Development Department (CDD) altered its practice and granted 14 days to respond to issues but had not been officially modified in the code.
Council Chair David Izraelevitz voted against the ordinance.
The second ordinance, to establish a CDD advisory board, received amendments and is scheduled to return to Council during its May 15 meeting.
The Council unanimously agreed to increase the number of citizens who can sit on the board from five to seven and that members represent White Rock and Los Alamos. Initially, three terms will expire after one year and the remaining four will expire after two years.
Additionally, an amendment to have advisory board members disclose any real estate interests, as well as any family members’ and other contacts’ interests narrowly passed 4-3. Councilors James Chrobocinski, Pete Sheehey and Susan O’Leary voted against the amendment while Izraelevitz and Councilors Antonio Maggiore and Rick Reiss and Vice Chair Christine Chandler voted for it.
Izraelevitz motioned to remove any reference of representation from White Rock and Los Alamos; he explained he felt that seemed to pit the two communities against each other. However, the motion died from a lack of a second.
Both ordinances garnered support from Council.
Maggiore introduced the ordinances. Regarding the ordinance to increase the response time for code violations, he said, “This is being brought forth in an attempt to codify the response time for violations; to allow at least a pay period between an issuance of a notice of violation and the time in which something is expected to be resolved. The main reason is not everyone in the community is able to immediately respond to things. We feel this is a simple change that will go a long ways to reducing stress and improving the receptiveness to violations.”
Chrobocinski agreed and pointed out that these are reasonable time frames to address violations although some issues such as roofing will require more time.
“This goes a long way in getting us in the right direction,” he said.
O’Leary also said she was happy to support the ordinance.
“This is a great first step to try to improve the implementation of our codes to better mesh the desires of our citizens,” she said. “We need to try things and if they don’t work then we need to try to improve. This is a code ordinance that we can do without any kind of negative impact to the County.”
Izraelevitz opposed the ordinance. He said Chrobocinski and Maggiore have addressed the code enforcement issue methodically but he felt there has not been sufficient public input. Izraelevitz said there are two sides to the issue and he wanted to be compassionate with homeowners who are trying to sell their homes and don’t want their property values to drop. He added he felt the ordinance binds the hands of County staff to address code enforcement in neighborhoods.
Regarding the advisory board, if approved, the seven member board would be tasked with reviewing all code enforcement notices of violation on a monthly bases and making policy recommendations to Council based on such reviews. Further responsibilities of the board would include working with staff on revisions and clarifications to the code, community outreach and organizing volunteer neighborhood cleanup efforts, according to agenda documents.
Chrobocinski voiced his support for the board.
“It’s time we get this done … it’s time,” he said. “We have been working on this way too long … let’s bring the community back to the CDD.”
O’leary said she was excited about this opportunity, adding she felt forming the board would be the best method to improve the situation. She explained it would offer meaningful discussion between the citizens and staff.
Reiss said he also felt something needed to get going as far as the board. He emphasized this would be an advisory board. It would not be directing staff nor would it give marching orders to the Council. He cautioned against giving too much personal information in the reports the advisory board would review. Reiss said he didn’t want individuals shamed.
Chandler also voiced support for the board. She said she felt the board would offer positive improvements, build community spirit and have real value.
Sheehey said passing the advisory board and other changes to the code enforcement program is an important step. The changes help with  “getting property maintenance to a level the community is happy with and still keep neighborhoods the way people want. It’s a balance,” he said. 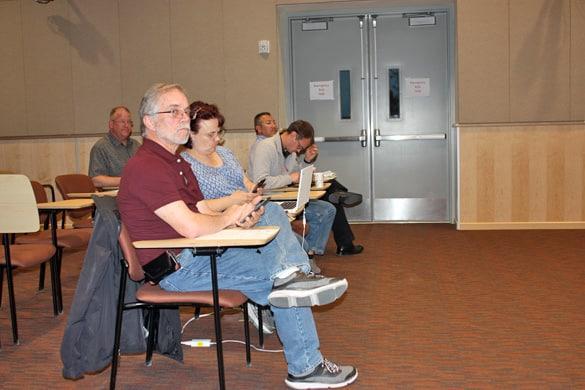