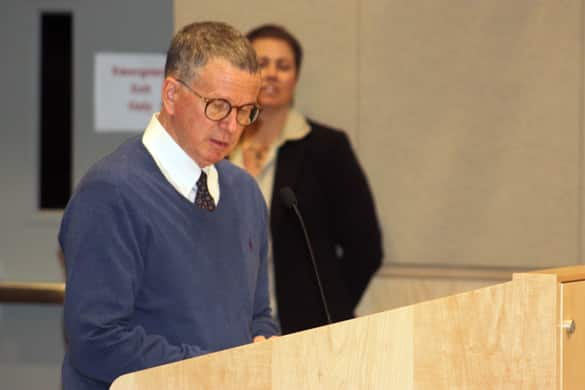 Vice President of LAH Investors Peter Kerwick discusses the housing development project with County Council Tuesday, Nov. 14 during its regular meeting. Photo by Kirsten Laskey/ladailypost.com
By KIRSTEN LASKEY
​Los Alamos Daily Post
​kirsten@ladailypost.com
In passing an ordinance during its regular meeting Nov. 14, the Los Alamos County Council is took another step toward achieving its number one goal: provide more housing.
The approved ordinance authorized the sale of site A-13-2 and A-12 to LAH Investors, LLC. The sale price is $2,175,000. Economic Development Administrator Joan Ahlers explained the land was purchased to develop an apartment complex. She explained the land is located at the south end of 35th Street. The parcels cover approximately 12 acres and is situated just east of the Los Alamos Medical Center, west of Mountain View Condos and south of Alpine Laser Dental. The property was the site of the former Los Alamos Site Office.
The plan is to build 149 units that will be constructed in two to four story buildings. Vice President of LAH Investors Peter Kerwick said the property will feature open vistas and green spaces. He added the complex will incorporate green, environmentally sustainable features such as water harvesting, energy star appliances and low-energy windows. He added the developers plan to grant an easement to the County to ensure the continuation of the Canyon Rim Trail.
Kerwick said they are committed to community partnering.
According to agenda documents the units themselves will range from studio to three bedroom apartments. They will offer high-end finishes such as quartz or granite countertops as well as balconies. It is further reported in agenda documents that the complex will offer a clubhouse as well as a 24-hour gym. Prices for the units are expected to be geared toward the laboratory workforce.
“We’re very excited to be a part of this project,” Kerwick said. He added that LAH Investors,which is managed by Santa Fe Properties Real Estate Company, with Gerald Peters as its president, brings a lot of experience to the table; they have done 6,500 units throughout the Southwest. The local project is expected to be completed in 2020. This is the best case scenario. The contract allows them four and-a-half years to complete the project before penalties (or what is called Liquidated Damages) are assessed. Its total project cost is $40 million.
County Councilor Chris Chandler asked Kerrig why they were interested in Los Alamos. Kerwick said, “It’s an excellent opportunity. There’s significant demand for new housing in Los Alamos…it’s just a special place.”
Chandler wondered about the lengthy period of time for due diligence, which is six months.
Kerwick responded saying they need to go through the plans and get funding. He added  the County requires all of this before they can close on the property. Kerwick pointed out there is an incentive to be timely with project because if it doesn’t get completed, they lose the opportunity. He added the developers also need to an environmental study, a site plan and ensure there are not any problems.
Councilor James Chrobocinski wondered if potential partners have been lined up. Kerwick said Peters, the president of the company, has the financial wherewith all to do this project without partners. However, he mentioned that Housing and Urban Development funds were being sought.
Councilor Antonio Maggiore wondered if any local contractors were going to be used as this would generate gross receipt taxes for the County. Kerwick said local consultants are expected to be hired.
Executive Director of the Los Alamos Commerce and Development Corporation Patrick Sullivan expressed support for the housing project.
“I would like express full support for the project,” he said. “This is a great step forward for multi-family homes.”
Many on council also voiced support for the project.
Chrobocinski pointed out that it is the County’s “top priority to get additional housing. It’s a desperate need. We have an excellent company with the wherewith all to get it done.”
Chandler also supported the project; however, she challenged the developers to meet  their deadline. She noted three-and-a-half years seemed like a long time to complete the project. “I am hopeful that is really what’s  going to happen,” she said.
Maggiore also voiced apprehension about the lengthy project deadline. He wondered if in 2020 the laboratory would still be hiring as many employees as it is now. Still, Maggiore supported the project.
“I wish you all the best of luck,” he said. “Thank you very much for your willingness to invest in our community and I can’t wait for 2020.”
Councilor Pete Sheehey commended the developers and their project.
“This is a big investment in our community that going to meet the needs of people who want to live here,” he said.
Council Vice Chair Susan O’Leary commented, “I don’t know what’s taken you so long to come to Los Alamos but glad we are you are here. We hope this is first of many business dealings in Los Alamos.” 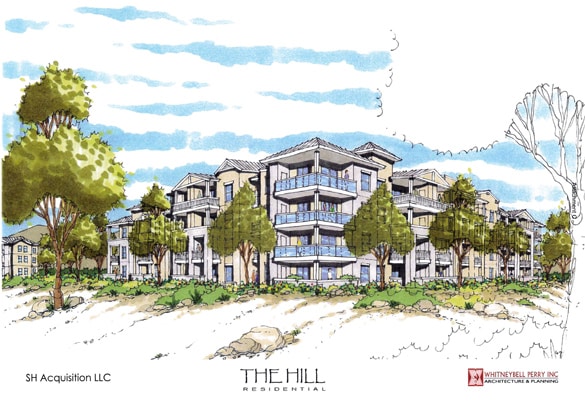