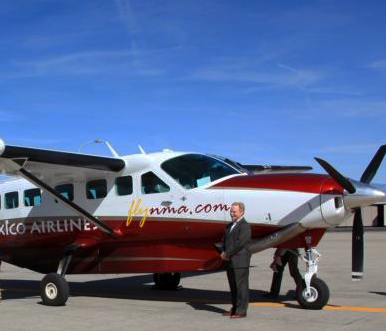 Los Alamos County applauded the one-year anniversary of New Mexico Airlines’ commercial airline service between Los Alamos and Albuquerque, during its Friday meeting, and recognized all of the important general aviation-related contributions that the Los Alamos Airport brings to the community and Northern New Mexico.

WHEREAS: the County Council wishes to acknowledge the one-year anniversary on April 8th of the launch of commercial airline service between Los Alamos Airport and Albuquerque’s Sunport, restoring this important transportation option after many years; and

WHEREAS: General Aviation has a long history at the Los Alamos Airport – with 13,000 aircraft arriving and departing annually; and

WHEREAS: The addition of scheduled air service, having changed the official designation of Los Alamos Airport from a General Aviation Airport to a Commercial Service Airport, enhances the County’s economic development plans by facilitating access to Los Alamos by business owners who are interested in bringing new businesses to our community; and

WHEREAS: According to a 2008 study, the value-added economic benefit or economic impact of Los Alamos Airport for the County is anticipated to be over $6.5 million; and

WHEREAS: In its first year of operation, New Mexico Airlines has successfully launched 1,569 flights between Los Alamos and Albuquerque with a total of 5,100 passengers; and

WHEREAS: Los Alamos County has a vested interest in the continued vitality of Los Alamos Airport, general aviation, and commercial airline service; and

WHEREAS: In addition to economic opportunities, the Los Alamos Airport plays a significant role in providing other valued services – including access to urgent medical treatment through Life Flight, non-emergency patient flights coordinated through pilot volunteers & Angel Flight, Search & Rescue efforts conducted through the local Civil Air Patrol, and providing a home base for U.S. Forest Service fire-spotting and tactical operations during the wildfire season;

NOW, THEREFORE, on behalf of the Council of the Incorporated County of Los Alamos, I do hereby proclaim the Month of April 2014 as “AVIATION MONTH.”