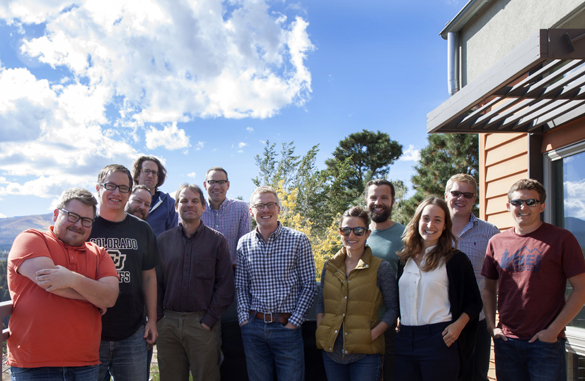 Descartes Labs of Los Alamos. Courtesy photo
RDC News:
The Northern New Mexico 20/20 Campaign, established in 2012, has already exceeded its goal of identifying 20 high-growth companies in the region before the year 2020.
To date, 38 businesses have been recognized for creating jobs and bringing revenue to the region. Six new members were honored in Santa Fe on October 13, including the Campaign’s first Native American owned company.
Los Alamos National Laboratory Executive Director David C. Lyons was the keynote speaker at last Thursday’s award ceremony at Hotel Santa Fe. Bobbie Ferrell, Constituent Services Representative for U.S. Sen. Tom Udall read a letter of support for the campaign from his office. A panel of previous awardees presented updates on the growth their companies have realized since being recognized, and many have already doubled their revenues or employees.
To qualify, companies must have a proven and developed product or service, two or more customers with 50 percent or more of their revenues coming from outside New Mexico, financial profitability and a solid plan for growth. A range of local elected officials, city and county governments and entrepreneurial support organizations provided the nominations, and each candidate went through a competitive screening process.
“These are the job creators of our region, and we want to make sure that our policymakers knew who they are. That’s why the 20/20 Campaign was launched back in 2012 ,” said Val Alonzo, executive director of the Regional Development Corporation. “We want to pave the way for future growth for these companies by giving them the recognition they deserve, while creating opportunities for important networking and follow-on assistance.”
This year, six area businesses were recognized at the awards:
Descartes Labs (Los Alamos) – Descartes Labs has developed a hyper-scalable, general purpose machine-learning platform designed for forecasting, monitoring, and historical analysis of other major commodity supply chains, such as oil and gas, mining, lumber and water along with the agricultural forecasts it currently releases. Descartes Labs currently employs 25.
Etkie (Santa Fe) – Etkie employs an artisan network of Native American beadworkers, jewelers and craftspeople based in New Mexico, and was founded to support indigenous people with living wages while keeping traditions alive. Currently, Etkie employs 11 and plans to double their retail accounts to 160 worldwide in the near future which will allow the company to expand their workforce.
High Water Mark (Cochiti Pueblo) – High Water Mark provides emergency management and hazard mitigation services, and is making a successful transition from working exclusively with tribes to working with municipalities and collaborating with major firms for larger contracts. High Water Mark currently employs 11, and expects to double that number and raise their revenues exponentially over the next three years as they expand into the state and federal markets.
Southwest PPE Services (Española) – Southwest PPE Services is a division of Mountain Air Cleaners, and has devised a system to care for Personal Protective Ensembles used in the fire service industry. The company is reconditioning PPEs to give them longer life and reduce fire service budgets. Southwest PPE Services currently employs 16, and is expanding to serve the entire intermountain corridor. It has been growing at a rate of 75 percent year over year.
Wildflower International (Santa Fe) – Since 1991, Wildflower has delivered world-class products and services to the federal government with a philosophy towards improving itself, its business partners and its community. Wildflower, founded by Kimberly deCastro, is one of the most respected woman-owned small business federal contractors in the country. The company currently employs 80, and projects future growth in the work they do to support federal agencies domestically and internationally.
Xpress (Santa Fe) – Xpress was launched to put doctors in charge of the relationship with the pharmaceutical industry, and has created a bias-free platform that enables smarter and more efficient prescription decisions for healthcare providers. The company is collaborating with two major pharmaceutical companies, and currently employs five people. Xpress is headquartered in Santa Fe, with a satellite office in Houston. A new office will open shortly in San Francisco that will directly support a major partnership there.
The Regional Development Corporation of Española launched the campaign in 2012. Key partners in the Campaign are Los Alamos National Laboratory and Los Alamos National Security, LLC, the company that manages the Laboratory.
For more information on the Northern New Mexico 20/20 Campaign, the partners supporting the initiative and the awardees, please visit www.NNM2020.org.
Menu
Los Alamos
46°
Fair
7:00am4:51pm MST
Feels like: 46°F
Wind: 0mph WSW
Humidity: 32%
Pressure: 30.21"Hg
UV index: 0
SatSunMon
55/36°F
55/28°F
48/34°F
Weather forecast Los Alamos, New Mexico ▸