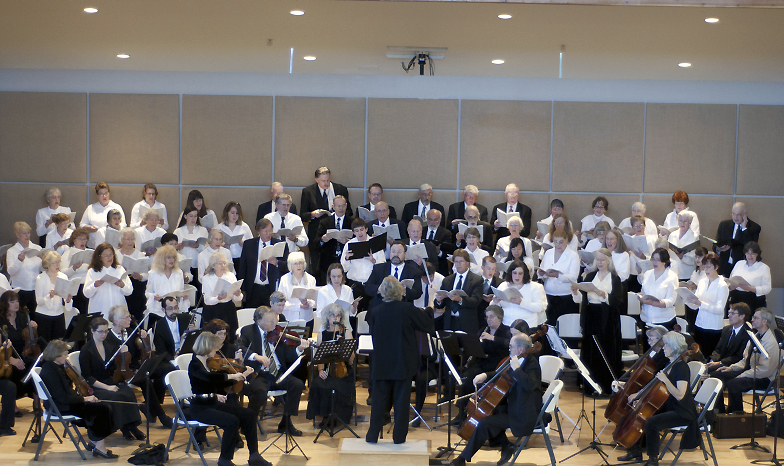 Tickets are $15 for adults and are available at CB FOX or at the door. Student admission is free.

Dr. Mary Badarak will direct the performance. The chorus of about 90 singers and the orchestra ensemble of about 40 musicians are featured in this performance of this much loved work.

On Nov. 19, 1943, Donald Flanders advertised in the wartime Los Alamos Times for people to join “The Singing Group,” which was at that time participating in madrigal singing at his home.

Apparently enough enthusiastic singers responded that his neighbors started to complain about the subsequent noise level.

The singers had to move to the old nursery school and prepared for a performance of Håndel’s Messiah during the coming Christmas season. The group’s name was changed to “The Los Alamos Choral Society.”

From that first Los Alamos performance, evolved not only the Choral Society but also the Los Alamos Symphony and the Light Opera.

That was the first of  70 continuous yearly seasons of choral  presentations by the LACS.

Over the years many community members, some sadly departed, have joined with the LACS in the challenge and thrill of performing the great works of classical and modern composers.

The Choral Society has had 15 directors during its long history. Dr. Mary Badarak is the current director and Cindy Little is the accompanist.

Performance of Messiah (roughly) every decade has become a Choral Society tradition.

Handel (1685-1759) was famous in London where he enjoyed the patronage of King George II, who was originally from Handel’s home state of Hanover.

From his prodigious output of compositions, his operas in the Italian style had enormous popular appeal. When this appeal began to wane, Handel, in his 50s, turned his attention to the oratorio.

His oratorios, using his adopted English language, started an English musical tradition. Messiah is a massive work, in three major parts, with 53 musical settings. (This concert includes all but four.)

Handel composed this Messiah in only 24 days of concentrated inspiration. The premiere performance in Dublin, Ireland April 13, 1742, was a huge success.

King George II attended the first London performance a year later, and when he suddenly arose at the start of the “Hallelujah” chorus, he established a tradition that is still usually observed.