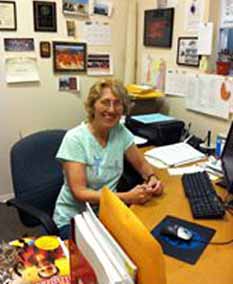 When Mary Badarak steps up to lead the Los Alamos Choral Society’s 2017 spring concert Sunday, she will be presenting a showcase of her work—not only as a director, but as a composer and arranger as well.

Badarak will be retiring from Choral Society after this concert, “Broadway to Beatles to Badarak and Beyond,” which is scheduled at 4 p.m., Sunday, May 28, at the United Church of Los Alamos. (Tickets, $15 for adults and free for students, are available now at CB FOX, and will be available at the door Sunday.)

This year, Choral Society’s regular Memorial Day Weekend concert will feature 14 songs that have been favorites in past performances, and of those 14, Badarak has written three and arranged six.

The show will begin with “How Can I Keep from Singing,” an American folk hymn.

The second and third songs will be “The Star Spangled Banner” and “America,” by Paul Simon—two different views of our country.

There will be three choral arrangements of Beatles songs–“Can’t Buy Me Love,” “You’ve Got to Hide Your Love Away,” and “Blackbird”–and three “bird songs”–“Los Pollitos,” “The Falcon,” and “When the Red Red Robin”– before intermission.

The second part of the show will open with John David’s lovely “You Are the New Day.”

There will be two “water songs”–“Wade in the Water,” and “The Water Is Wide.”

And the show will close with two very different “end songs”–the amusingly cynical “Always Look on the Bright Side of Life” from Monty Python’s “Spamalot,” and the beautifully descriptive, faith-inspiring “Evensong: Let Evening Come,” featuring a poem by Jane Kenyon and music composed by Badarak.

Cindy Little will be the accompanist for the program. Helen Boorman, Joan Contarino, MaryBeth Stevens, Wendy Swanson, and Andrew Till will solo.

A reception honoring Badarak will be held in the social area of the United Church immediately after the Sunday concert. All those attending the concert, and all people who have sung or played in Badarak’s Los Alamos concerts in the past, will be welcome to attend, enjoy lights snacks, and sign a card for the director.

The Songs She Wrote

In a recent interview, Badarak spoke about what inspired “Los Pollitos,” “The Falcon,” and “Evensong: Let Evening Come,” the three songs in Sunday’s program that she composed.

She said she was driving from Atlanta to Chicago when she asked a friend to “sing something” to pass the time. Her friend began singing “a well-known and much sung children’s folk song, a lullaby, that Hispanic mothers sing to help their children go to sleep,” Badarak said. She enjoyed the little song and later used it as the basis for “Los Pollitos,” which imitates the sound of little chicks looking for food and their mothers putting them to bed.

“The Falcon,” which tells of a wounded knight dying in a castle while his love sits nearby, was drawn from a collection of “anonymous English lyrics and songs from the 15th century,” Badarak said. Her father gave her the book.

She said Kenyon’s “let evening come” poem has been used in the music of “at least a half dozen other composers.” Badarak herself was singing in a church choir in Atlanta when the director showed it to her. Kenyon wrote the poem while sitting on the porch of a farm house in New Hampshire. Her husband had cancer, and she was taking him to treatments, day after day. Ironically, he survived, but Kenyon herself died shortly after his illness.

Badarak said that when she first read the poem, composer Robert Shaw had died recently, and she had found his death “heartbreaking.” She found the poem lying on her desk, read it, was deeply touched by the closing message–“Don’t be afraid. God does not leave us comfortless, so let evening come…,” and set the words to music.

Badarak says she has loved directing Choral Society, but, at age 70, after more than 10 years, she finally found commuting round-trip between her home in Cochiti Lake and Los Alamos for weekly rehearsals–regardless of rain, snow or ice–just too much. She decided it was time to pass the baton.

Her hectic life will be a little easier after she retires, but it will still be very busy. She plans to continue her work as artistic director of Santa Fe Music Works and library director of the Irene S. Sweetkind Public Library in Cochiti Lake. Her final concert in Los Alamos will be repeated in the park next to the Cochiti Lake library at 1 p.m. on Memorial Day.