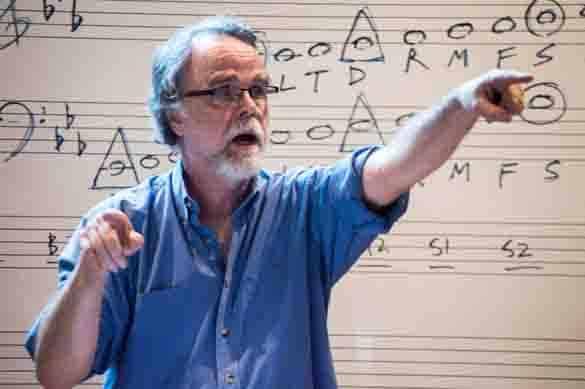 The Los Alamos Choral Society’s 2018 Memorial Day concert—”Freedom!”—is scheduled for 4 p.m. Sunday, May 27 at the United Church of Los Alamos.

Tickets are $15 per adult at CB FOX in Los Alamos or at the door. Student admission is free. This will be the Choral Society’s first concert since Steve Paxton took over as conductor.

Paxton, former chairman of the Contemporary Music Program at the Santa Fe University of Art and Design, and a veteran of 25 years teaching music composition at Texas Tech, said in a recent interview that he chose music for this concert that reflected the values for which Americans have been willing to fight and die.

Those values, as expressed in the music, range from freedom of religion to civil rights for all; from appreciation of labor to love of the land; from support for creativity in the arts to dreams of justice expressed by our founders and refined and widened in today’s hopes for a better future.

The concert will begin with Choral Society and the audience singing “The Star-Spangled Banner,” which is based on a poem written by Francis Scott Key during the War of 1812,  when, at dawn, he saw the U.S. flag still flying over Fort McHenry, which had withstood a bombardment by the Royal Navy.

The concert will end with the audience joining the Choral Society once again in singing “Hymn to Freedom,” by Harriette Hamilton and Oscar Peterson, which expresses the yearning for a time when all people can join hands and live in dignity.

The seven pieces that make up the central heart of the concert will be: “My God Is a Rock,” a spiritual arranged by Alice Parker and Robert Shaw;  “MLK,” a tribute to Martin Luther King, with words and music by U2 (often sung by Bono); “Shenandoah,” a folk song adapted by James Erb; “Blue Rondo a la Turk,” a jazz piece written by Dave Brubeck and adapted for voices; “The Promise of Living,” with words by Horace Everett and music by Aaron Copland; “Old Home Day,” by Charles Ives, a viola solo filled with nostalgia and musical references to old hymns and Civil War tunes; and “The Testament of Freedom,” a longer work by Randall Thompson using words from the writings of Thomas Jefferson.

Choral Society, an organization that has existed since the Manhattan Project, is a non-audition choir open to all people who love to sing. It is especially interested right now in adding more men to its ranks.

The organization will take a summer break after this performance, but in the fall, it will begin work on new music, preparing a classical piece for a winter concert. Rehearsals are held at the United Church, 7-9 p.m. Tuesdays.