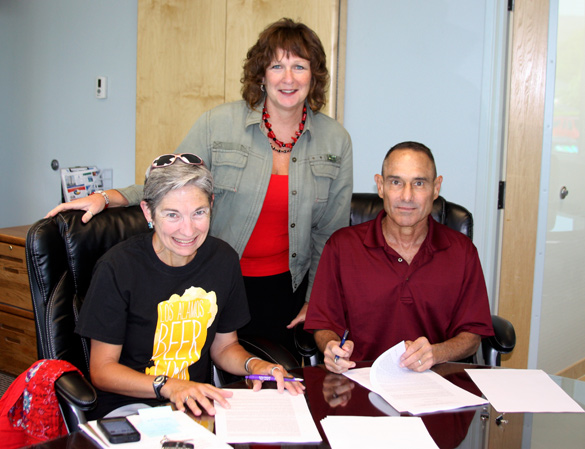 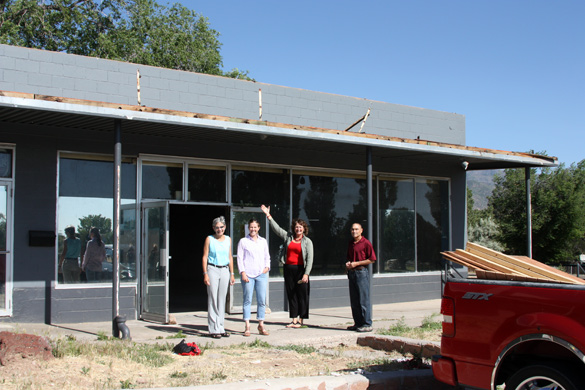 The Los Alamos Beer Co-op has a home for the new taproom and brewery it plans to open in downtown Los Alamos. Beer Co-op Board President Micheline Devaurs signed a lease agreement this morning with Philip Kunsberg, owner and developer of Central Park Square to lease the space formerly occupied by the Canyon Bar & Grill.

“These two have been a real pleasure to work with,” Kunsberg said. “It’s not just about beer to them. They want to build something for our community.”

Hayes told the Los Alamos Daily Post that Kunsberg “has been amazing to work with.”

“He’s partnering with us to renovate the space. It was our goal to find an existing space and renovate it as part of the revitalization of downtown Los Alamos,” she said.

The Beer Co-op plans to open the taproom in early 2015, Devaurs said. According to Hayes, it will take about six months to get a license to sell beer. Renovations are already underway. There will be a fireplace inside, and next summer the Beer Co-op hopes to open an outdoor beer garden adjacent to the building.

“We are so grateful to our members and board for getting us this far,” Devaurs said.

“We still have a long way to go,” Board Member Amy Engle said. “We need to raise money for renovations and we invite the whole community to join us.”

“Creating a gathering place in town is my passion,” Devaurs said. “I want to do my part to make Los Alamos a great place to live.”

Engle got involved with the Beer Co-op shortly after moving to town. “I wanted to see a gathering place that was open late. My husband and I want to stay here. It’s this kind of business that will help keep young couples in town.”

The Beer Co-op received business advice and help from Los Alamos Connect, an organization dedicated to helping startup businesses in northern New Mexico. They also got advice from New Mexico brewing companies around the state.

The Beer Co-op will celebrate its new location with a “Get the Brewery Open” party 6-9 p.m. Saturday, June 28 at 170 Central Park Square (near Quiznos). Craig Martin Experience will be playing and Santa Fe Brewing will serve. The event is free (suggested donation $5). It’s a chance to celebrate and have fun and to learn more about the Los Alamos Beer Co-op. Visit the Beer Co-op online at http://www.losalamosbeer.coop/. 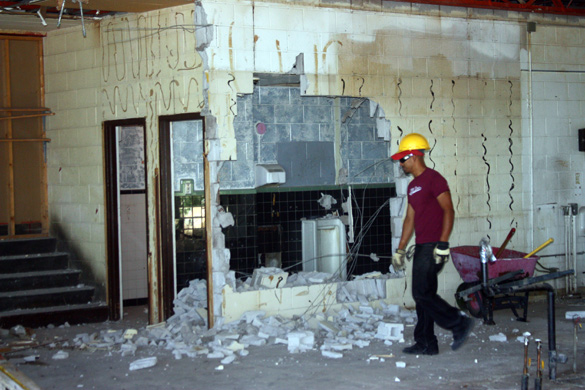 Work is already underway at the site of the Los Alamos Beer Co-op’s new taproom and brewery at 160 Central Park Square. Photo by Bonnie J. Gordon/ladailypost.com