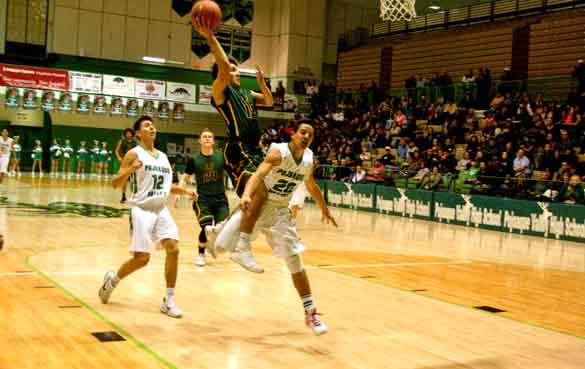 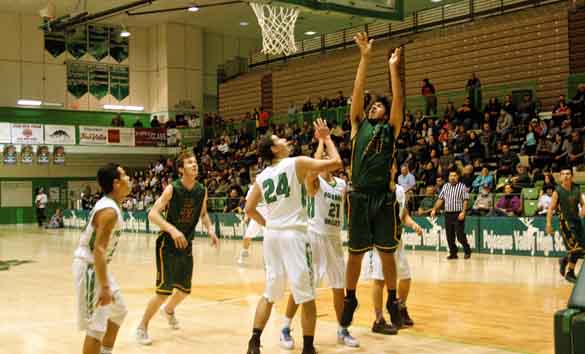 In a game that the Los Alamos High School boys basketball team needed to win, the Hilltoppers took care of business and defeated Pojoaque Valley High School 56-50 Jan. 3 at Pojoaque to even their record at 6-6 for the season.

“This is a tough place to come into and win,” LAHS Coach Mike Kluk said. “It was pretty much a must win for us. We’re a 5A school and Pojoaque is 4A. It doesn’t look good for us to lose to a 4A school when you’re trying to build a resume. You have to win the games you should win and steal some that you’re not.”

Pojoaque was leading 12-9 when the Hilltoppers got a lift off the bench from Jack Stewart, who is recovering from an ankle injury. Stewart came up with a steal and layup, then buried a three-pointer to give Los Alamos a 14-12 lead at the end of the first quarter.

Pojoaque came back in the second quarter, sandwiching a basket and a pair of free throws by Mario Santistevan around a Jerry Herrera layup to take an 18-15 lead. A basket by Stewart tied the score at 18-18. After a free throw by Pojoaque’s James Garcia, Stewart saved a long pass from going out of bounds and tossed the ball back to Troy Hammock for a layup. A pair of free throws by Herrera gave Pojoaque a 21-20 lead, but that was the last time the Elks would be in front. A basket by Isaac Fason and a pair of free throws by Antonio Trujillo, who had just missed three charity tosses in a row, put Los Alamos back in front. Despite sinking only 6-of-15 from the free-throw line in the first half, Los Alamos held a 24-21 lead.

The Hilltoppers took control of the third quarter with a 6-0 run for a 30-21 lead. Pojoaque’ Avery Torrez got a sweet assist from Garcia for a basket, then Torrez returned the favor with an assist to Garcia  under the basket. Two free throws by Garcia cut the Hilltoppers lead down to three points 32-29, but a three-pointer by Stewart and a steal converted into a layup by Adam Paulson put Los Alamos ahead by eight points. Pojoaque’s Andres Rpmero hit a three-pointer to make the score 37-32 in favor of the Hilltoppers heading into the fourth quarter.

Abasket by Herrera cut the Hilltoppers lead to three points to begin the fourth quarter. Los Alamos put together an 8-1 run that started with a three-pointer by Ramon Roybal and ended with a layup by Michael Naranjo gave Los Alamos a double-digit lead 45-35 with 4:28 left in the game.

Pojoaque cut Los Alamos’ lead down to five points twice in the remaining time. Key baskets by Trujillo and 6-of-8 free throw shooting by the Hilltoppers kept the Elks at bay. The lead was back up to 10 points 56-46 with less than 30 seconds left in the game and the Hilltoppers held on for a 56-50 victory.

Trujillo led the Hilltoppers with 15 points, including 13 in the second half. Stewart finished with 12 points. Garcia had 15 points for Pojoaque.

Los Alamos hits theroad to Belen High School Friday to face the Eagles. The Hilltoppers lost to Belen 44-33 in the opening round of the Poe Corn basketball tournament Dec. 28 in Roswell. That game was tied after three quarter when Los Alamos held Belen to zero points in the third quarter. Los Alamos bounced back to beat Bloomfield 55-44 in their next game, then lost to Farmington High School 55-39 to finish 1-2 at the tournament. The Hilltoppers try to be stingy on defense.

‘Defensively, we played well in all three games,” Coach Kluk said. “We need to get better at finishing inside. If we make our inside shots and free throws, we could be a pretty good team.”