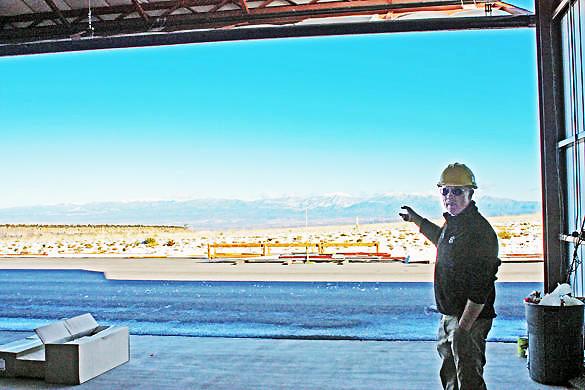 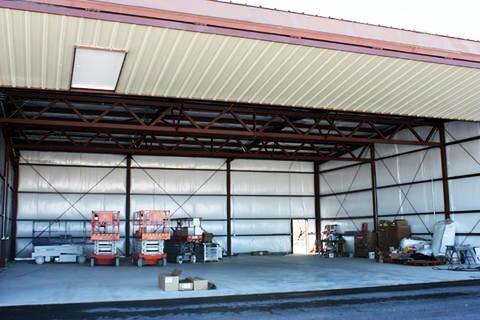 The interior of the new hangar at Los Alamos County Airport. Photo by Kirsten Laskey/ladailypost.com 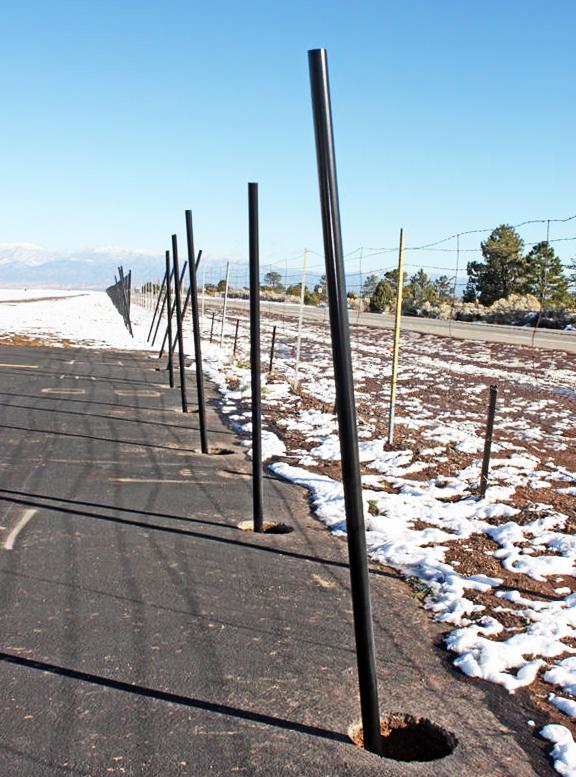 Posts are being installed for the new fence along N.M. 502 adjacent to the airport. Photo by Kirsten Laskey/ladailypost.com

By KIRSTEN LASKEY
Los Alamos Daily Post
kirsten@ladailypost.com
If you have driven past the Los Alamos County Airport on N.M. 502 recently, you might have noticed some changes taking place.
For starters, the snaggletoothed barbed wire fence that runs along the perimeter of the airport is being replaced. The 50-year-old fence, which runs along N.M. 502 and Airport Road, is being replaced with a black-vinyl coated chain link fence. Currently, a long line of black posts tilt and lean against their holes in the ground, waiting to be set in place.
If you have the chance to look harder while driving down N.M. 502, you’ll notice another new addition at the airport: a giant, tan, corrugated metal building. The building, which is the County-owned hangar, is nearly ready for use. Just trim work and some electrical work is needed.
Airport Manager Cameron Humphres said he is pleased with the progress workers have made on the fence.
“They have been making great progress,” he said, adding, “I’m really pleased with the quality of the work thus far.”
Work on the fence started Oct. 22 and is expected to be finished in January. The work was awarded to TriWest Fence. In addition to the new fence, the two vehicle gates and three pedestrian gates will be replaced.
A black vinyl-coated fencing was chosen, Humphres said, primarily for its looks. He explained Los Alamos County Council wanted something that was attractive since the airport is one of the first things people see when they enter town. However, vinyl coated chain link fencing does have a longer life than other metal chain-link.
The total cost of the project, including a 10 percent contingency, is $843,846.85. It is being funded by numerous sources. The County is contributing $99,368; the New Mexico Department of Transportation awarded a $54,297 aviation grant; but the biggest contributor is the Federal Aviation Administration’s (FAA) $613,468 Airport Improvement Program Grant.
The hangar has been a long time in the making. Humphres said the hangar is actually a pre-fabricated kit purchased from a company called Erect-A-Tube in March 2017. Still, he expects the hangar to be opened for occupancy either next month or in January.
Assembly took a while because County personnel did the work in addition to their primary duties, Humphres explained.
The original intent was to contract the assembly work but the first bid received no response and the second request for proposals garnered two bids but both were above budget. Rather than asking County officials for a budget increase, Humphres said it was decided the County had the manpower and expertise to do the work itself.
The budget for the hangar is $325,000 and the facility extends 9,500 square feet. It is divided into one large hangar, three smaller T-hangars and two storage areas.
“You can conceivably house between four and six aircraft,” Humphres said.
The large hangar will house Classic Air Medical’s helicopter. While it still will be primarily stationed at Los Alamos Medical Center, Humphres said the hangar will be a great option for Classic Air during inclement weather.
As for the other three T-hangars, “We’ve got a very long waiting list for hangars,” he said.
There are 57 aircraft stationed at the airport but 18 owners of private planes have expressed interest in getting space. There just isn’t enough room, Humphres said.
The hangars will be leased at $2,850 a month, which will generate approximately $34,000 a year. Humphres pointed out that is just revenue from leasing space. More pilots means more fuel sales and more services being purchased.
“We currently generate about 40 percent of revenue necessary to operate and maintain the airport,” he said, adding that the County makes up the difference … so every additional dollar the airport can generate means less supplemental monies from the County.
From an economic standpoint, the airport’s contribution is significant, he said.
“The total economic actively this airport generates is $7.5 million a year,” Humphres said. “It either directly or indirectly supports 85 jobs and the return on that investment … is quite large.”
The airport’s role in the community extends beyond just being an economic driver. Humphres pointed out its Civil Air Patrol provides search and rescue services as well as support for wild land fire operations. The airport also serves as a base for the U.S. Forest Service for its fire services and the laboratory uses the airport as part of its emergency response.
Finally, the airport has the only weather reporting system in the County that provides reports to the National Weather Service, Humphres said.
Menu
Los Alamos
84°
Fair
5:50am8:25pm MDT
Feels like: 84°F
Wind: 10mph SE
Humidity: 12%
Pressure: 30.18"Hg
UV index: 5
ThuFriSat
82/61°F
82/59°F
77/57°F
Weather forecast Los Alamos, New Mexico ▸