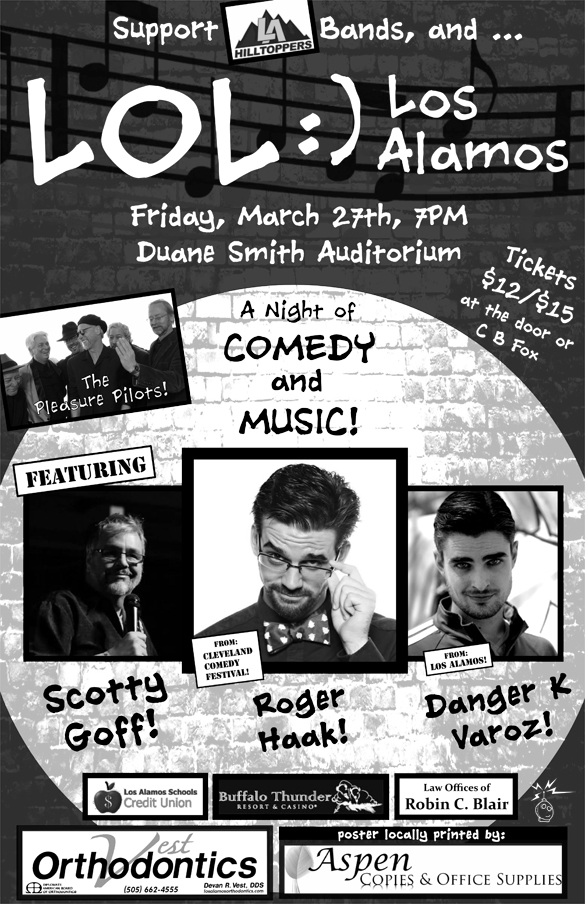 Laugh Out Loud Los Alamos, A night of comedy and music to benefit the Los Alamos High School band program is 7 p.m., March 27.

Tickets are $12 for students/seniors and $15 for adults and can be purchased in advance at CB FOX or at the door.

He’s a big barbershop nerd and he loves to create close dominant seventh harmony with three other voices. He’ll never shoot down the opportunity to sing a “Goodnight Sweetheart” or “Wild Irish Rose.” He’s a vegan, veteran sky-diver who has peddled his bicycle halfway across the country from DC to NYC to Cleveland to St Louis to Kansas City (1,400 miles). He loves soccer and MLS and he claims Sporting KC as his team.

Haak played trombone in high school and he loves the idea of supporting the band through laughter. He is a Big Beatles fan and he saw Ringo perform at Radio City Music Hall for his 70th birthday, and Paul came out for the encore. – which he lists as in his Top 5 moments in his life.

He says, “ If you think the Rolling Stones are better, he will tell you why you’re wrong and have always been wrong about everything”. Haak’s afraid that snakes hide in toilets and he always check before he sits down. He passionately wears silly socks, he turns 27 this week, and he does not know how to spell the word squriel. It also bothers him that The Cure hasn’t done a promotional concert for Susan G. Komen., after all the work they’ve done for awareness for The Cure.

A professional comedian by day and night, as well as a career high school administrator and support of high school students, Scotty Goff has appeared on radio and in movies and commercials as well as on stage across the the United States…

He has authored a novel: Potato Torpedoes Away! And has Produced/Performed-Comedy CD: Junk drawer In My Head. He is an inspirational speaker and all around funny man who has dedicated his life to laughter, the arts and the creative development of students.

He loves to ski, ride motorcycles and sing – he is also a talented impersonator. He loves the idea of supporting band students through laughter, because, playing the trombone in the middle school band made him laugh!

Danger was born at Los Alamos Medical Center in 1985 and raised in White Rock. In addition to stand up comedy, he is also a film producer currently working on two feature films for release in 2016, Money is King (IMDb) and The Whistleblowers (IMDb). He also is a father to a 5-year-old girl who says she wants to tell jokes like her dad someday, only she’d prefer to be seated when she does it. He is a musician, screenwriter and foodie and he’s ready for his Chile Works.

Danger began stand up at the insistence of his mother who has always encouraged him to perform, she still makes it to a lot of his shows and is the only reason he ever thought he could do this at all (Yeah moms!). He loves what he does and he wants to keep doing it forever, humor is incredibly important and he feels blessed to be able to make strangers laugh. He is extremely excited about playing at Duane Smith to his hometown. He says, “This is a really big deal for me!”