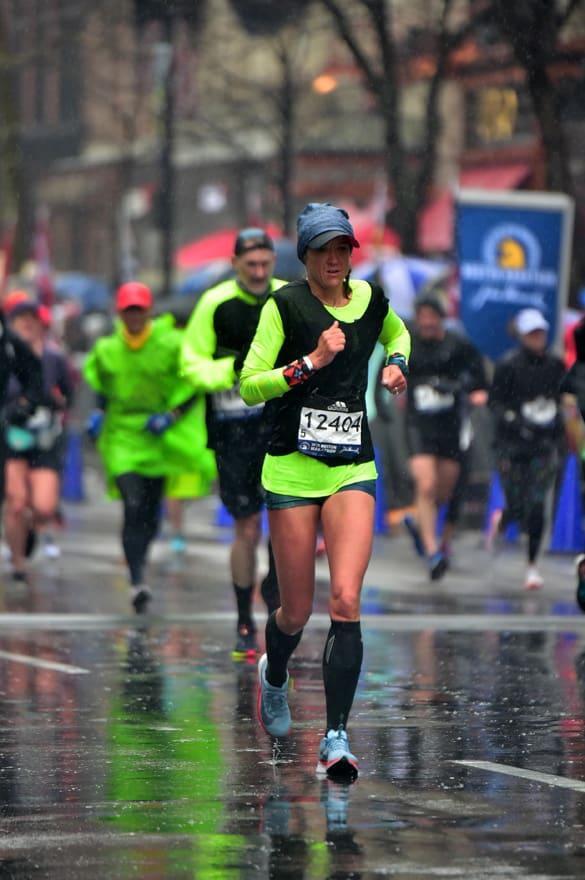 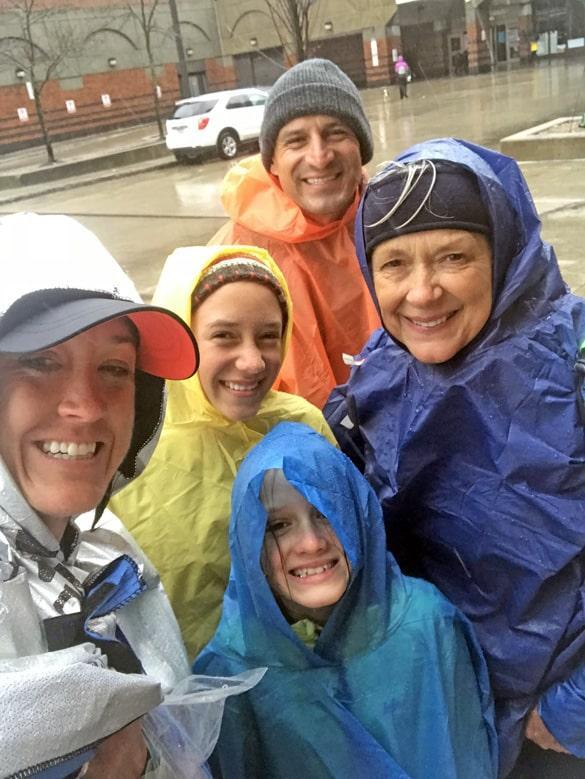 Lindsey Montoya meets up with family at the 19.5 mile mark of the Boston Marathon. Courtesy Photo

BOSTON – With the high altitude, steep rolling hills and strong running community, Los Alamos makes the perfect place to train for endurance competitions. That’s certainly the case for local runner Lindsey Montoya, who finished the 2018 Boston Marathon presented by John Hancock in a time of 3:22.17.
While Los Alamos enjoyed a beautifully warm 70-degree day, Montoya fought through the elements in a wet, windy, and frigid Boston. Heavy rains and wind gusts up to 25 miles per hour would lead to the coldest Boston Marathon in more than 30 years.
Qualifying to compete at the Boston Marathon is no small feat, and getting the chance to actually race in the storied event holds a special place in Montoya’s heart. “The race is kind of bittersweet to me,” Montoya said. “It holds a special meaning to me. Growing up, running was a part of our family. My dad was a big runner, he was my coach, and we always talked about Boston, not ever thinking that it was something I’d really be able to do.“
“My dad was from Boston and he passed away unexpectedly about nine years ago,” Montoya said. “Him not being a part of it was really hard. That’s why I continue to run, because that’s when I feel closest to my dad and that’s kind of an outlet for me.  People go to Boston and run for different reasons, but my biggest one was running for him, running for my girls, and running for the kids I work with at the school, knowing you don’t have to fear things, and you can set goals and really try to go after them knowing you’re capable and brave.”
With such a big family connection as her reason for running, Montoya was lucky enough to have family attend the race. Due to the popularity of the race and the huge amounts of spectators everywhere on the course, Montoya and her family had to set a plan to meet up at the 19.5-mile mark to see each other.
“It’s hard with a point-to-point race and so many people in town,” Montoya said about her family not getting to see her at different points in the race. “I told them all bye in the morning when I left at 6 a.m. and told them I’d see them at 19.5 and again at the finish.”
As promised, Montoya’s family was waiting at the 19.5 mark when she showed up. “I saw Steven, and my girls, and my mom all together, and I saw them and I stopped and gave them all hugs. My mom was like ‘are you doing okay?’” Montoya remembered about seeing her family. “I remember saying ‘I’m frozen,’ I was just so cold.”
Runners at Boston have to check in three hours before the race starts. Montoya remembers showing up and waiting with tens of thousands of runners all standing side-by-side or “sitting and shivering, or just standing around with no room to warm up.”
When the race started, Montoya relied on her training to start. The part that she couldn’t prepare for was the weather. She shed layers as the race went on because they were either soaked or restricting. Montoya ran strong until she started to struggle at mile 18.
“I’ve never run in weather like this before. I was hunkered down trying not to get slammed by the wind and the rain and focus on running,” Montoya remembered about that cold and rainy morning. “At about mile 17 I cramped. My quads were tight as a rock, and I think it was because my core body temperature had gone down so much.”
After her brief visit with family at mile 19.5, Montoya recalls having a hard time getting started again.
“Trying to get started back up again was so hard. I was just freezing,” she said.
Montoya rallied to finish the race to take the 1,005th spot out of 13,400 women to cross the finish line.
“It was humbling knowing I qualified. The race day itself was pretty ‘wicked’,” Montoya said of the race, citing a common Bostonian expression meaning both amazing and hellish.
Montoya was able to take in the sights and sounds of Boston while she and her family were in town. Catching a Red Sox game and visiting the Boston Aquarium were among the highlights of the trip, other than the race.
With the 3:22 race time, Montoya automatically qualified to race again next year, something she definitely plans on doing. In the meantime, Montoya plans on either racing in the Duke City Marathon or the Portland Marathon this year to stay in shape. 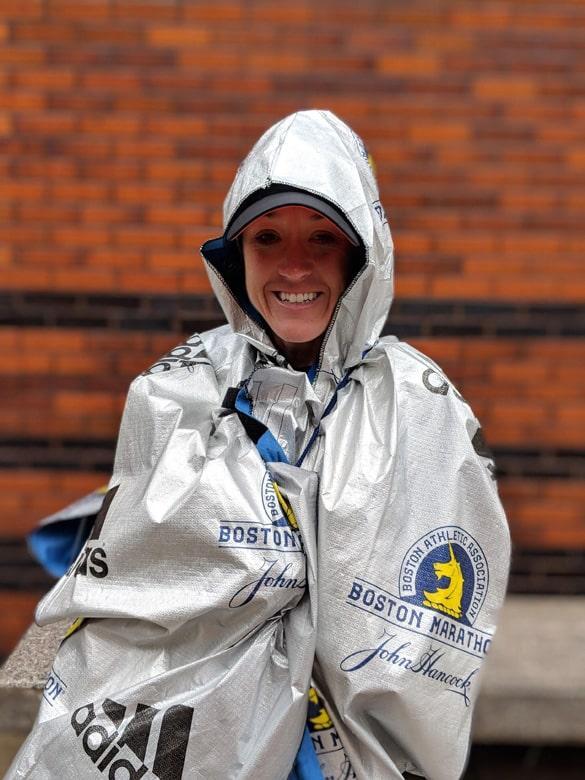