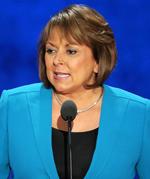 The Governor also announced that the agency will soon begin to process SAEKs for the Albuquerque crime lab to help tackle their backlog.

“Since day one, this project has been focused on bringing justice to victims of sexual assault,” Martinez said. “We’ve finished the project earlier than anticipated and provided law enforcement agencies with crucial evidence to bring the perpetrators to justice and we will continue to fight for victims by working to clear the backlog at the Albuquerque crime lab.”

The project was completed a year and a half ahead of schedule. The lab will use grant funding to address the backlog at the City of Albuquerque’s crime lab.

The Department of Public Safety recently launched a model sexual assault evidence kit (SAEK) policy that has been rolled out to all local law enforcement agencies in New Mexico for their adoption, and the department has also secured funding for a computer tracking system for rape kits.

“The statewide SAEK computer tracking system will document sexual assault evidence kits throughout each stage of the process,” DPS Cabinet Secretary Scott Weaver said. “From the creation of the kit, the collection of evidence, receipt of the kit at a police agency, receipt of the kit for testing at a forensic laboratory and when evidence is returned to the local police agency. The system will also allow victims or an advocate to track progress of the kit testing.”

The new SAEK policy and computer system follow legislation signed into law by Governor Martinez in 2017, which requires all New Mexico Law Enforcement agencies to submit sexual assault evidence kits for testing within 30 days of the agency receiving the kit.

“Testing of all kits had been completed sooner than expected,” said Donna Richmond, director of the New Mexico Sexual Assault Kit Initiative (SAKI). “With the testing results, law enforcement can review the backlog cases and complete the investigation. Law enforcement agencies should adopt policies to ensure the backlog of rape kits does not happen again.”

Martinez secured $1.2 million in special funding to clear the backlog in 2016. Two temporary forensic DNA Scientists were hired in 2017 to tackle the backlog, and the department established a Sexual Assault Kit Initiative (SAKI) project to address the statewide backlog.

During the summer of 2015, the DPS initiated a statewide inventory of 148 agencies regarding untested sexual assault evidence kits held in NM law enforcement evidence storage rooms. The survey showed more than 5,300 untested rape kits across NM, 74 percent of which were at the Albuquerque Police Department (3,476) and Bernalillo County Sheriff’s Office (472), which are submitted to the Albuquerque Police Department Forensic Lab. A total of 1,388 SAEKs were found in local law enforcement agencies and have been tested by the State Crime Lab.