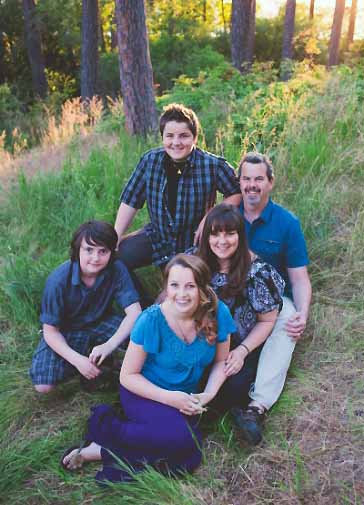 The Blake Family of Los Alamos

The Blakes, a Los Alamos family of five, plans to enter full-time mission work with SIM (sim.org) in Niger, Africa.

Carrie (Valentine) Blake, daughter of Allen and Judy Valentine, grew up in White Rock. She, along with her husband Sean and their teenagers Caitriona, Garrett and Derrick are leaving in August for French language training in Paris to prepare for their mission work in Galmi, Niger.

The Blakes will join the SIM team at the Galmi Hospital in Niger. Sean will be the IT administrator/consultant for the hospital, working with Nigeriens to find culturally relevant solutions to complex technology issues. Key projects will include clean power, electronic healthcare records, and mentoring Nigeriens to move into the role of keeping the IT side of the hospital running.

Carrie will serve as the midwifery tutor for the hospital, with goals of introducing compassion into the childbirth paradigm and reducing mortality through addressing issues like obstructed labor and neonatal resuscitation.

Many years ago Sean and Carrie realized they were attracted to long-term, cross-cultural missions. Shortly thereafter, Carrie discovered her calling in midwifery. Meanwhile, Sean followed opportunities in management and out-of-the-box IT solution development, uniquely preparing him to serve in mission hospitals and solve complex technology-related issues in culturally relevant ways.

Through their visits to Niger, they fell in love with the people and needs of Niger and are anxious to serve in the hospital and community. As they say, “Everyone has a part to play in missions work. Some of us go. Some of us pray. Some of us send through finances. Some do all three.”

As Christians, the Blakes are hoping to build relationships and handle their lives in a manner enabling them to share the reason for why they do what they do. First, Sean needs to learn the language and culture because without them he will not be able to apply his IT consulting expertise to help the Galmi Hospital run more efficiently and effectively to respond to the overwhelming current need in Niger.

So what is an IT guy going to do in the Sahara Desert? An IT guy can be unbelievably useful in the Sahara desert! Sean’s day-to-day tasks at Galmi will include the technical support and administration of Windows servers, wireless routers, firewalls, user IDs, and hospital work stations (x-rays, etc.). Also, he will be responsible for supporting coordination of electronic biomedical equipment, ensuring that internet access for the hospital is up and running, and guaranteeing users have access to the network. Finally, Sean intends to document the current IT environment of the hospital and living compound.

Aside from a willingness to do whatever needs to be done, Sean feels the most valuable asset he will take to the hospital will be his gift of IT consulting. Ideally, the long-term result will be reliable and accurate medical data to be used by the staff of the Galmi Hospital and the Nigerien government to improve medical care.

To achieve that goal, he will introduce an inventory system as well as an electronic health record system and integrate them into a data storage system, incorporate the current pharmacy system with the other department systems, and assimilate the x-ray machine(s) with that data storage system.

In the United States, medical records are keyed off of our social security numbers. Curiously, a unique patient identifier, like the SSN, does not exist in West Africa, thus presenting an interesting quandary when trying to solve problems related to everything in the hospital.

To introduce and integrate technologies will require new processes in the hospital as well as in IT to collect, store, organize, and retrieve data from many different systems. It will not be easy because there is one significant constraint to overcome—the Western way of doing IT. All of these changes must be sustainable and relevant within the culture of West Africa, or it will be pointless to do them.

More important than all of the systems and processes associated with the data and hardware are the people. Sean is very much looking forward to his work with the people. Over the long-term, he will do what we here in the United States call knowledge transfer, but it will not be a straight knowledge transfer because the culture is different, requiring years of relationship building and sharing life together to ensure that whatever the implementation of the tools looks like is not only usable, but also sustainable by Nigeriens who are equipped to do the work.

Sean hopes to work himself out of a job. However, realistically, it will be years or decades before such happens. It might not even happen in his lifetime, but he plans to strive for it.

Carrie is passionate about women and birth and considers herself to be lucky as one of the few people in the entire world who has the privilege of being present for and trained in emergent care at birth. As a midwife, her somewhat daunting tasks will include developing a curriculum of advanced teaching and assessment to further the midwives’ knowledge and lead to advancement for them, offering both formal teaching in a classroom setting and informal coaching by working alongside the other midwives, and helping the national midwives to set up an ongoing teaching program for the obstetric aides.

In addition, she will participate in prenatal as well as intra- and post-partum care of women coming to Galmi Hospital. In conjunction with the senior medical team, she will explore ways of improving patient care, the range of treatment offered, and the best use of the facilities available.

There are other areas in which she hopes to serve, particularly from a public health perspective. Because Carrie is just starting her thesis as the final step in her Master’s Degree in Public Health Program, she hopes the net result of her work will be a plan for community mobilization to decrease maternal mortality due to postpartum hemorrhage.

She considers it quite an honor and a privilege to have been asked to affect how birth is done in Niger, to have been asked to be the hands of feet of Christ in ministering to the mamas and the little babies and the midwives, and to take away the horrible statistic that one in seven women dies in her childbearing years. Infant mortality in Niger is 70 per 1,000, whereas in the United States it is six per 1,000.

She hopes for opportunities, knowledge, and skills learned from the people to help them use their own “smarts” to change their lives. She says that if she can serve God and help people save their own people’s lives, she’s “in.” Her motto is simply: “Train Midwives; Save Lives.”

To learn more about the Blakes’ mission opportunities in Niger, visit www.BlakeMissions.com, call them at 970.227.5765 or e-mail them at sean.blake@sim.org.

Two churches in White Rock, the White Rock United Methodist Church (WRUMC) and the White Rock Baptist Church (WRBC), are serving as “sending” churches for the Blakes’ mission work. To help support the Blakes’ mission work, the WRUMC is staging a huge church-wide parking lot sale at 7:30 a.m. Saturday, Aug. 1 at the church at 580 Meadow Lane. The WRUMC welcomes donations for the sale from the community. Just drop them off between 9:30 a.m. and 3 p.m. Friday, July 31 at the church. Please no firearms, ammunition or dangerous items.