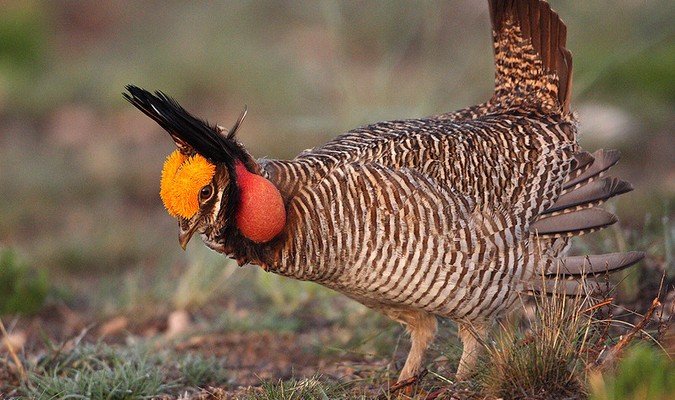 WASHINGTON – U.S. Sen. Tom Udall announced Friday that local conservation efforts should help guide the U.S. Fish and Wildlife Service’s (FWS) proceedings on a draft rule review process that would list the Lesser Prairie Chicken as a “threatened” species under the Endangered Species Act.
In a letter to U.S. Fish and Wildlife Service Director Daniel Ashe, Udall highlighted the work of state and local efforts, which have been working in partnership on habitat conservation efforts.
“As you know, private citizens, companies and public land management agencies in New Mexico have been working for years to help maintain Lesser Prairie Chicken habitat and protect the species,” Udall said. “I hope that you will continue to take these efforts into consideration as the process for listing continues over the next year.”
The full text of the letter can be found here.
Udall also asked Ashe to clarify “what a determination of ‘threatened’ would mean for landowners, ranchers and industry in New Mexico in light of the existing conservation agreement.”
He further requested that the agency explain how and when New Mexico constituents can make their views heard on the proposal rule, including plans for publicmeetings in the state.
Listing the Lesser Prairie Chicken as a “threatened” species versus an “endangered” species under the Endangered Species Act allows more flexibility for management.
A threatened listing would allow the agency to tailor regulations to fit particular situations and take into account existing conservation efforts such as those that are currently being carried out locally.
Udall noted that in New Mexico, many private land owners and permit and lease holders have already coordinated with the Bureau of Land Management and Fish and Wildlife Service to establish Candidate Conservation Agreements (CCA) and Candidate Conservation Agreements with Assurances (CCAA.)
The Center for Excellence in Hazardous Materials Management in Carlsbad is successfully managing these agreements to ensure Prairie Chicken habitat is maintained in almost two million acres throughout New Mexico.
Once found in abundant numbers across much of Colorado, New Mexico, Texas, Oklahoma and Kansas, the Lesser Prairie Chickens’ range of native lands has been significantly reduced.
In 1998, the U.S. Fish and Wildlife Service first identified the Lesser Prairie Chicken as a candidate for protection under the Endangered Species Act.
Menu
LOS ALAMOS