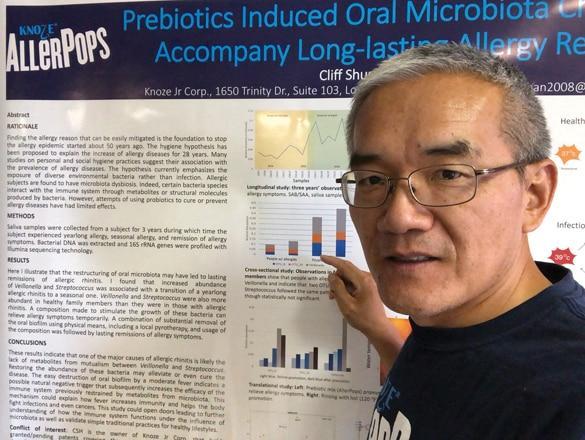 ASPEN, Colo.,- Allergists attending last week’s Aspen Allergy Conference had the opportunity to review evidence showing too much oral hygiene and antibiotic usage could be the culprit behind rising allergy rates-and that prebiotics may be the answer to permanent, drug-free allergy relief.

Han was one of a handful of physicians and researchers who displayed their findings related to allergies, asthma and immunology at this year’s conference. The annual event attracts allergists from around the world.

“I was honored to share the results of my study with some of the foremost allergists in the field,” Han said. “My goal is to educate physicians on the role of prebiotics as a safe, effective, drug-free alternative for allergy relief.”

In conducting the study, Han acted as his own guinea pig. Suffering from year-round allergies that had been increasing in severity for years despite his best efforts, Han noticed allergy relief after having an unrelated fever and then sucking on the prebiotic lozenge he had been developing-a mix of sugars, amino acids and nutrients designed to help beneficial bacteria multiply.

Han hypothesized that modern oral hygiene could be diminishing “good” bacteria in the mouth and throat, leaving power of immune system unchecked and become sensitive to allergens.

For the three years between 2014-2017, Han documented the relationship between oral probiotics and his allergy symptoms. He found lower numbers of beneficial bacteria like Veillonella and Streptococcus in his own mouth when his symptom was worse and higher numbers in those of family members who did not suffer from allergic rhinitis.

When Veillonella and Streptococcus numbers increased in his mouth and throat after simulating a fever by rinsing the tongue with hot water before introducing prebiotics to “feed” the bacteria, Dr. Han’s allergies were eliminated.

Han eventually patented his prebiotic mix and created AllerPops. But after experiencing such dramatic results in his own life, and with the data to back up his findings, he wanted to help get the information into the hands of physicians everywhere so more allergy sufferers could find relief without drugs or side effects.

To that end, Han began traveling the country earlier this year, presenting at conferences like Aspen Allergy Conference. At last week’s event, allergists had the opportunity to view Han’s detailed study and ask questions about his findings.

“These results could have significant implications not just for allergy sufferers but for others dealing with chronic conditions,” Han said, who was a physician in China before working on the Human Genome Project and heading up a research team that completed hundreds of bacterial genomes during his 22-year career at the Los Alamos National Laboratory.

He added, “Those suffering from autoimmune disease and inflammatory conditions in particular could benefit from the ability to release the power of the immune system or suppress it at will without drugs.”