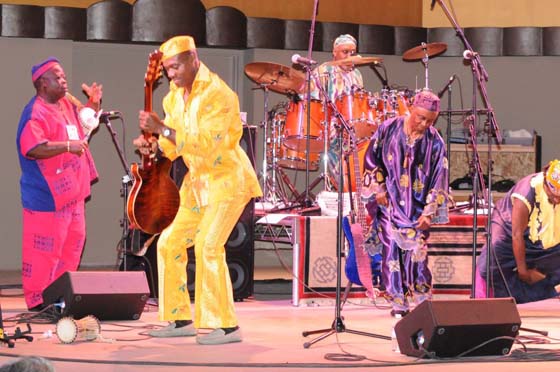 The Los Alamos County Summer Concert Series will be back at Ashley Pond with the West African Highlife Band at 7 p.m. Friday, July 12.

“Highlife music” is the music from the western African club scene of the 50s, 60s and 70s. In those years when young African musicians and students would go to college in Europe, they’d return with a love of the fusion of the music of the cultures. The young people would go to the clubs of their homeland and celebrate the “highlife,” the good times and the parties, just like we do in Los Alamos on Friday nights at our venues. WAHB will play highlife dance classics, Afro-beat and traditional music of Nigeria and Ghana. The show is “KTAOS FM 101.9 Night.”

The band is led by bass player Baba Ken Okulolo. Baba (a loving term for father, grandfather or family leader) grew up in Nigeria. As a child he went to Anglican missionary schools. On short wave radios, he’d listen to Afro-Cuban music, American R&B, highlife and jazz.

His first international tour was, as a very young man, with the Nigerian Afro-rock, Afrobeat and socially conscientious superstar, Fela Kuti. (The Broadway show “Fela” is based on this man’s life and is still running strong after five years at the Eugene O’Neil Theater.) After touring with Fela Kuti, Baba Ken joined with another Nigerian international superstar, King Sunny Ade and his African Beats. It was with King Sunny Ade that he first came to San Francisco and fell in love with the city, the area and the people.

Two years later, in 1985 he moved to the Bay area. He now leads four African bands there that represent his various musical specialties: Afro-funk, traditional Nigerian folk, modern Afro-beat and highlife music. We will hear some of all the music but it’s a highlife show. Viva highlife! Viva the celebrations! Viva life! Viva musica!

Everyone that I’ve spoken to that has seen West African Highlife Band says they are an unbelievably fun band and one of their favorite dance bands.

The West African Highlife Band have played all over the world including the Lincoln Center in New York and are regulars at the great San Francisco Bay area venues like the Fillmore, the Warfield, Oakland Coliseum, Yoshi’s, the Great American Music Hall and the Greek Theater. Check out Baba Ken Okulolo on Facebook and YouTube.

The Downtown Creative District (www. creativelosalamos.org) is having some special events downtown that you should know about. This is the schedule for Friday evening. Fuller Lodge Art Center’s “Wallflowers Exhibit” is open until 9 p.m. They also have bathrooms with running water! Mesa Public Library is hosting games, crafts and an art opening until 7 p.m. LA Historical Society (behind Fuller Lodge) is hosting medieval living demonstrations until 8 p.m. (They also have toilets!) The Bradbury Science Museum has “Pinocchio Reanimated” until 8 p.m. Pet Pangaea host a group dog walk from 6 p.m-7 p.m. Karen Wray Fine Art Gallery and Studio id upon until 8 p.m. Dixie Girl Restaurant offers picnic baskets, dinner and an after concert bar.

Please shop locally. It’s very important to LA County, our businesses, schools, roads, the Los Alamos County Summer Concert Series, me and around 18,000 others.
Next week, Friday, July 19, we have the Paula Nelson Band from Austin, Tex. The show will be in front of Smith’s Food & Drug for Smith’s Market Place Night.

Paula Nelson sings blues, rock, Americana and country. She’s been influenced the most by Jesse Coulter, Rita Coolidge, Willie Nelson and his friends. Check her out at www.paulanelsonband.com and YouTube. I hope you’ve enjoyed our Series so far and there are still more chances for good times. Let it roll!