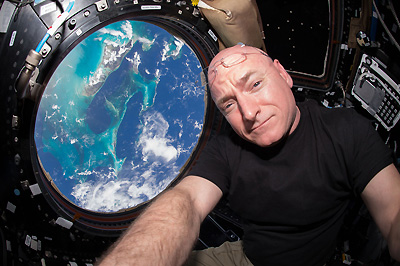 Rockaway, NJ – Hundreds of science and technology industry leaders watched with rapt attention as Astronaut Scott Kelly accepted the 2015 R&D Magazine Scientist of the Year Award from his perch in the International Space Station (ISS) above the Earth.

The video acceptance speech riveted the audience at the R&D 100 Awards Banquet held at Caesars Palace in Las Vegas as Kelly thanked R&D Magazine for this special award and explained the International Space Station (ISS) Year in Space mission.

The Scientist of the Year Award, now in its 50th year, recognizes career accomplishments in scientific research and technology development spanning nearly all disciplines from physics to medicine to chemistry.

“I’m humbled, too, because I am representing the hundreds of scientists who designed the experiments being done on ISS today – and in some cases, I am the subject of these experiments,” Kelly said. “We know there is much more to come.”

Kelly, who has accomplished a lot during his 51 years, much of it in non-normal environments, boasts nearly 2.5 years spent in extreme environments, either as a naval test pilot experiencing high G’s in super-sonic military aircraft or working on science experiments in the ISS’s zero-G environment. As a NASA astronaut with long-duration experience on space shuttles and the ISS, Kelly volunteered and was selected by NASA in November 2012 to be its member of a planned Year in Space mission.

“Astronaut Scott Kelly has spent a lot of his life going very, very fast. He is currently soaring above our heads at about 5 miles per second on the International Space Station, with his Russian counterpart, where he is scheduled to perform more than 450 experiments during the year-long voyage,” said Bea Riemschneider, editorial director of the Advantage Business Media Science Group, the parent organization of the R&D 100 Awards and R&D Magazine, introducing the 2015 Scientist of the Year.

In response to requests for earth studies and working with the United Nations Office for Outer Space Affairs (UNOOSA) to help people better understand the Earth from the ISS’s vantage point, Kelly creates almost daily tweets (@StationCDRKelly) containing recent images he has taken. The images include those of specific geographical spots on Earth, weather patterns, the ISS, and whatever else strikes his fancy. He often makes a game of these, asking followers to see if they can identify the geographical image he has tweeted.

When Kelly comes back down to the surface of Earth in March 2016, he will have spent a combined 500 days of his life in space – a record for any American astronaut. As Operations Branch Chief of ISS, Year in Space 2015-2016, Kelly is profiled in the September/October 2015 issue of R&D Magazine and graces its cover.

The Scientist of the Year Award is presented annually during the R&D 100 Awards presentation. The full list of 2015 R&D 100 Award Winners is available here.

Next year’s R&D 100 Awards will take place Nov. 4 at the Gaylord National Resort & Convention Center in the National Harbor in Oxon Hill, Md., in conjunction with the second annual R&D 100 Awards & Technology Conference, scheduled for Nov. 3-4, 2016.

Entries are now being accepted for the 2016 R&D 100 Awards. More information is available at www.rd100awards.com.