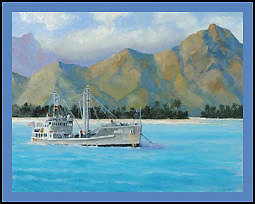 Los Alamos Little Theatre will hold a reading of the play “Mr. Roberts” by Thomas Heggen and Joshua Logan at 7 p.m. Wednesday, June 11 in the Green Room of the Performing Arts Center, 1670 Nectar St.

“Mr. Roberts” is scheduled to be performed in March as part of the LALT 2014-15 season. Anyone interested in reading from the script – or listening to the reading – is welcome to attend.

Welcome aboard the U.S. Navy Cargo Ship, USS Reluctant, which is operating in the back areas of the Pacific during World War II. This is not a very happy ship. It has a crew of 12 enlisted men and four officers that haven’t had liberty in a couple of years.

They have a captain who is so unreasonable he won’t even let them take their shirts off when they are unloading cargo in the sweltering heat. The only people who can make their lives worth living are Mister Roberts, the cargo officer, and the ship’s doctor.

This story of a group of American sailors aboard a Navy cargo vessel in the Pacific shows the crew suffering from that deadly boredom that is part of the routine of war. The ship’s Skipper is a cantankerous, small-minded man. Every one of the crew conspires against him as the ship makes its cargo runs throughout the South Pacific. The Cargo Officer, Mister Roberts shares the crew’s dislike for the captain, which is one reason for his popularity.

The real story behind what’s going on is that the captain has won a palm tree as an award from the admiral for the ship’s cargo duty service (primarily due to the efforts of Mister Roberts). The admiral has hinted to the captain that if he keeps doing a good job he’ll be promoted. Mister Roberts keeps applying for a transfer, to get off the USS Reluctant, and get combat duty before the war is over. Mister Roberts sends in his request for transfer weekly and the captain returns all his requests as “denied.”

Life aboard the Reluctant becomes hilarious as the crew discovers that Army nurses have been stationed on a nearby island. Ensign Pulver, the ship’s laundry officer, has a record for seducing women. He manages to date one of the nurses, Lt. Ann Girard, a seductive but no nonsense nurse. The crew finally gets its liberty, thanks to a deal Mister Roberts made with the captain about no more requests for transfer… and what a liberty they have!

The entire ship’s crew brings great synergy to the production; create collective moods, of boredom, humor and drunkenness. The production is very funny and particularly nostalgic for veterans who served under a commanding officer as outrageous as the captain of the USS Reluctant.

After winning many ingenious battles against the Skipper, Mister Roberts finally wins himself a transfer to combat duty on a destroyer off Japan. This makes for a very dramatic closing scene.