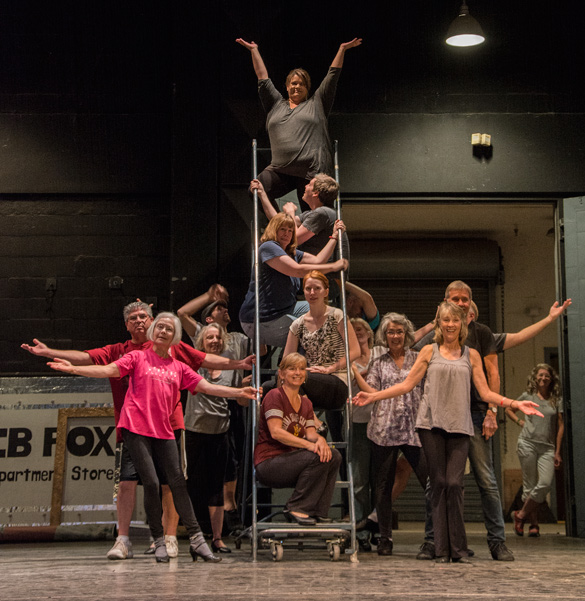 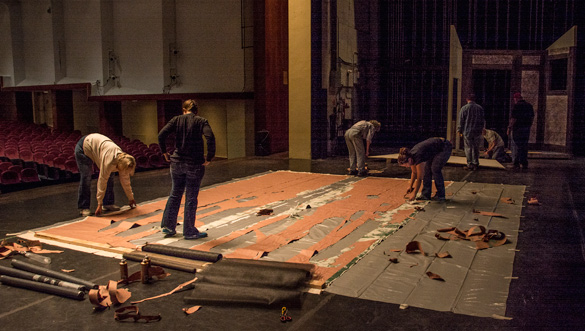 Sets by Holly Haas under construction. Photo by Larry Gibbons

Everything about the show is monstrous- the ambitious set, the cast of millions (50), and 100 costumes! The impressive set was designed and created by Holly Haas, set designer. Dave Olivas, master carpenter, built the set with the help of many dedicated volunteers. Countless others, including the assistant director, producer, crew and costumers have worked tirelessly to bring this marvelous musical comedy to Los Alamos.

“Young Frankenstein” is set in 1934 and is based on the 1974 film of the same name, written by Mel Brooks and Gene Wilder. The musical style of the 1930’s era is captured in the music and lyrics written by Brooks and highlighted with the classic Irving Berlin showstopper, “Puttin’ on the Ritz”.

The plot unfolds as Frederick Frankenstein inherits his grandfather’s estate in Transylvania. With the help of Igor and Inga, he reluctantly finds himself in the ‘mad scientist’ shoes of his ancestors when confronted by his grandfather’s ghost. In spite of wacky misadventures and interference from his fiancée and his grandfather’s creepy housekeeper, Frederick brings a stolen corpse to life when he implants it with an ill-gotten brain. The monster escapes and the comedy keeps the audience laughing until the very end!

Purchase tickets at at CB Fox, at the door or online at Brown Paper Tickets http://www.brownpapertickets.com/event/2055226. The show is rated PG-13 due to some double entendre and bawdy humor, which will go over most youngster’s heads.