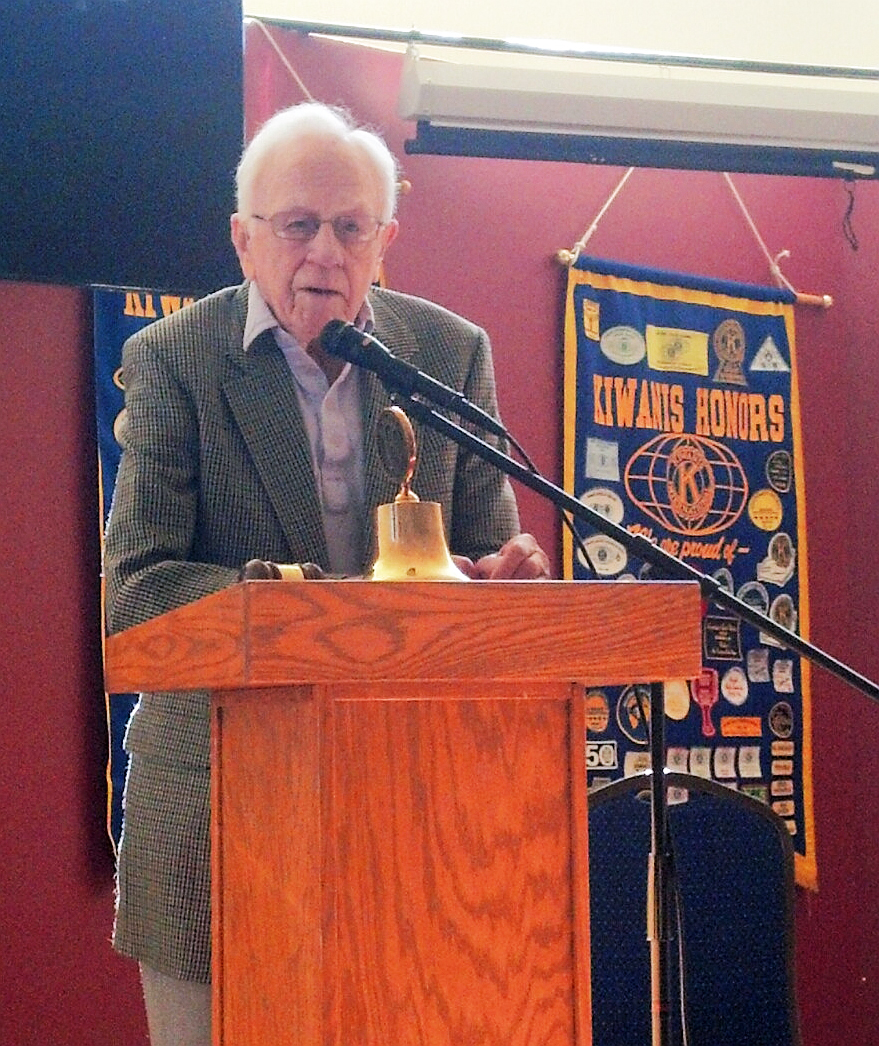 When Kurt Deshayes asked Bernard “Bun” Ryan to speak at Los Alamos Kiwanis Nov. 19, Bun said yes immediately, but neither man was sure exactly what Bun’s topic should be. Finally, they agreed that he should “just talk about life.”

It was a good choice. Bun (as everybody calls him) has lived a remarkably full life—for almost 90 years. Kiwanis members listened intently as he stood at the podium in Kelly Hall at Trinity-on-the-Hill Episcopal Church for 20 minutes and regaled them with story after story, describing experiences that ranged from happiness to horror. When he had finished, they honored him with a standing ovation.

Life, Bun said, “is usually a series of ups and downs. Even JFK said, ‘Life is cruel.’”

His life began in Leadville, Colo. His father—who died when he was seven—was from Ireland. He had studied to be a priest, Bun said, but he walked out a year before he would have taken his final vows, and his family rejected him. He immigrated to the United States, married, and had 11 children, but he died in 1930, leaving his wife with four boys still to raise. She took in washing, Bun said, and all of the boys had paper routes.

Bun graduated from high school in June 1941 and went to work running the local jewelry store for the owner, who preferred to spend his time making and repairing watches. “If you were a good salesman,” Bun said, “you’d get a commission. I turned out to be pretty good.”

Everything changed, however, on Dec. 7, 1941, when the Japanese bombed Pearl Harbor. People stopped making jewelry and started to make Jeeps, Bun said.

He worked at JC Penney Co. Inc. for a while, then tried to volunteer. He wanted to be a bombardier, but he couldn’t pass the eye exam. On June 1943, he was drafted into the U.S. Army and reported to Camp Roberts, Calif. (He found out many years later that he and the late New Mexico Sen. Steve Stoddard of Los Alamos were at Camp Roberts at the same time, but they didn’t know each other until much later.)

He took artillery training, then moved to Fort Ord, where he took six weeks of infantry training. After that, he moved on to Fort McDowell in San Francisco Bay, where, he said, he could look over and feel jealous of the prisoners on Alcatraz.

Eventually, he took ship on the Monticello, a converted Italian luxury liner that had carried his brother Jim to India in 1943. This time, the ship was Bun’s transportation on the first step to New Guinea. He ended up on the Island of Goodenough, off New Guinea, and was part of the invasion of Hollandia in Dutch New Guinea.

It was “a pretty easy invasion,” he said, and it brought the Army “good air fields.” Afterward, he was involved in invasions that took all the small islands in the area that offered air strips.

He then became part of the staging for the invasion of Leyte and Luzon in the Philippines. He said this time he took “the best boat ride I ever had.” On Christmas Day 1944, he recalled, he was on the admiral’s flag ship in the invasion of Luzon. Relatively speaking, it was “luxurious living.”

On Jan. 9, 1945, the U.S. Army attacked Luzon with orders to march “west coast to east coast and cut the island in half as fast as we could.”

Initially, the march went fast and furiously, but suddenly, the invasion was halted. The troops were baffled and frustrated, but the next morning, their commanding officer explained that they had been getting close to a known prisoner-of-war camp holding many Americans, including survivors of the Bataan Death March.

The Army feared that if the Japanese faced invaders, they would kill the prisoners. Instead, on the night of Jan. 28, 1945, the 6th Army Rangers went in and saved the prisoners.

Bun recalled the “column of emaciated prisoners—just like walking skeletons” that came out from the camp. The invasion force soldiers were warned, “Don’t feed them,” he said, because Army doctors knew that it would take special medical treatment to get them eating a regular diet again without killing them.  The Filipinos “had pitched in and helped them,” Bun said, but still, “You couldn’t imagine people looking that bad.”

(Bun said he wondered for years why no one was writing about the 6th Army Rangers and their taking of the prison camp—and finally someone did. “Ghost Soldiers,” by Hampton Sides of Santa Fe, N.M., appeared in 2001, drew very favorable reviews, and became a national bestseller. Bun called Sides and invited him to Los Alamos, and the author gave a presentation at the Los Alamos Historical Society on his research and writing of the book.)

“We continued our mission and cut the island in half,” Bun said. The invading force then  marched up into the mountains of Luzon, where the Japanese had dug in. Five month later, they moved on the city of Baguio and started taking prisoners. Luzon was declared secure June 30, 1945.

Subsequently, Bun was based at Rosales, Luzon, preparing for the invasion of Japan. “That would have been a bloodbath,” he said. However, a team of scientists in the little town of Los Alamos, N.M., developed two nuclear weapons that were dropped on Hiroshima and Nagasaki—and suddenly the war was over. “It was just unbelievable,” Bun said. Before he left the Army, Bun was promoted to master sergeant. He was one of the youngest master sergeants in the war. He was also awarded the Bronze Star and many other citations. Before returning to the United States, he spent about six weeks in the Osaka area of Japan. Little kids on the street followed him, begging for chocolates, and he wondered, “What the hell was this all about.”

Eventually, the Army sent him to Taos and he ended up the manager of the JC Penney store there, but it wasn’t what he wanted to do. Friends suggested that he apply to Los Alamos Scientific Laboratory, and he ended up at S Site “working right alongside some of the guys who developed the weapon that I thought had saved my life.”

He married a nurse from Colorado, and they had “a couple of kids.”

However, he still wanted to be his own boss, so he left the laboratory and took over the Carriage Inn restaurant in Los Alamos.

It didn’t go well, he said. He found himself deeply in debt, and he became an alcoholic. After two bouts in Los Alamos Medical Center, he said, “One Sunday morning, I looked in a mirror and said, ‘You better do something.’” He called Alcoholics Anonymous, and he hasn’t had a drink since.

In 1977, the laboratory asked him to take a job in its Employee Assistance Office, helping alcoholic employees. He worked there for years.

And then there were the Clowns….

Bun had started playing softball in Leadville. He said, “I threw real fast, but I didn’t know where.” He was on the Camp Roberts team, which won a championship. He even got a three-day pass as a reward, went to Hollywood, and danced to the music of Jimmy Dorsey.

“We didn’t have much softball overseas,” he said, but when he came back to the U.S., he found that each town had a team.

A popular Los Alamos man, Lou Pierotti, had an idea for a Los Alamos team that would have five players (instead of nine), wear clown makeup, and play regular teams to raise money for charity. He asked Bun to be the pitcher. At first, Bun was hesitant. He didn’t want to wear face paint, but a friend finally persuaded him, and he found that, “Once I put that paint on, I became a different pitcher.” The team won the first game it played by a margin of 16-to-1. Pierotti actually urged the Clowns to “’Ease up. Let them hit a few.’”

In the team’s second year, Los Alamos Kiwanis took over sponsorship of the Clowns, and Bun found that he could “take a God-given talent and devote it to improving other people’s lives.”

Pierotti’s Clowns were so good that their photo was on the first issue of Sports Illustrated in 1954. Over 25 years, they won 177 games and lost only 23. They raised more than $200,000 for charity. Bun was inducted into the New Mexico Softball Hall of Fame. Today, a large plaque just south of the local library honors the Clowns.

The years rolled by. Bun will be 90 Dec. 23. “I lost my wife about 10 years ago,” he said. She was with their daughter, planning a shower, and she died in her sleep. “I really miss her,” he said, but, “I still feel really fortunate.”

He’s planning to wait until after Christmas, then hold a 90th birthday party Jan. 4 at Fuller Lodge. “You’re all invited,” he told Kiwanis.

“It’s been a great life,” he said. “It’s had its ups and downs … That’s my wish for you guys today … I wish you faith and strength and love and wisdom … I wish you songs, but also blessed silence and God’s peace….”