Life And Times Of A Young World Traveler 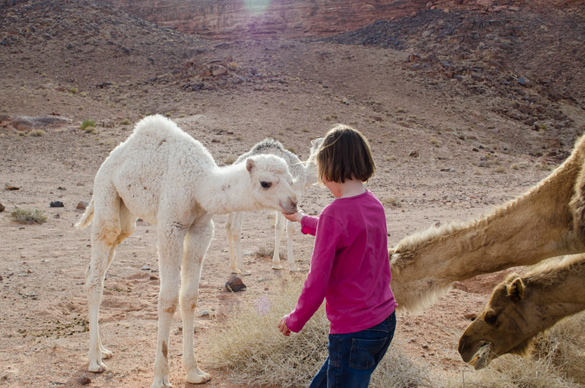 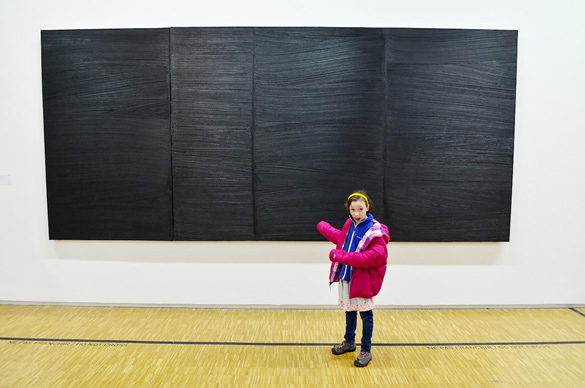 Sydney Frazier at the Pompidou Museum of Modern Art in France. Photo by Jason Frazier
By TERALENE FOXX
Los Alamos

My granddaughter, Sydney Frazier, has become known as “Sydney, The Explorer.” The Frazier Family, has been exploring four continents for the past two years.

When they left, my granddaughter was 8 years old, she now is 10. In the two years they have been gone she has spurted in growth and grown in knowledge. Each week, we keep in contact via Skype. Some of the most enjoyable interactions is when she is so excited about seeing a bird, tasting a new food, or meeting a new friend.

She has become a voracious reader (electronic books have made reading so accessible). Her parents home school her. “When we first started out, we were too rigid in schooling our daughter,” they said. “Over time, and with lots of trial and error, we found doing a little each day worked well for us and that flexibility was the key. We used Saxon Math for math, but then used traveling as inspiration for everything else.”

As part of her homeschooling she wrote in her blog, “Sydney’s Corner,” at  www.travel-junkies.com. Some of her posts have appeared in the Los Alamos Daily Post.

For her posts, she used her experience, but also had to do research, and write her posts out by hand. Once it was perfected, she could enter it into the computer and post it on her blog. The blog was a lesson in language, grammar, social studies, biology, history, and many other subjects.

I have taken excerpts from her blogs to show the depth of experience she has had.

Foods of various countries: Amazingly she has tasted food from a variety of countries and become a critic though her blogs. I have been amazed at how an 8-10 year old will try new foods, everything from bugs to kangaroo. 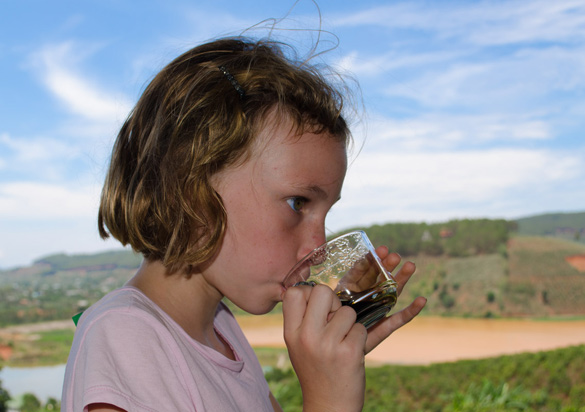 Compassion for Animals: “In Thailand I got to feed and pet baby elephants. I saw one of the baby elephants chained, and I also saw that the elephant had some wounds that could have been caused by elephant hooks.  It made me sad to think that this wild creature was in a corral and has to work all day. Elephants deserve to be free, not work all day and do silly tricks for tourists.” March 14, 2014

Learning a different language: In Jordan, they road camels and stayed in a Bedouin Camp “We had a yummy dinner at the camp. The dinner was cooked underground. We had chicken and rice with pita bread and humus. We had a nice night. I learned how to count and write my numbers in Arabic. I slept in a tent. When we woke up we had a gorgeous breakfast of pita bread, humus, and cheese.” She also got to herd goats and met 7-year-old Abul “My favorite camel was the one that ate out of my hand. I named it “Jewel.” I also got to herd goats. It was fun.” (Feb. 16, 2014)

Visited historic places: Ruins were everywhere, including ancient, Roman, Greek, and modern ones such as the Berlin Wall, etc. She learned history and saw the places where history was made.

Learned ethnic stories: She learned stories such as The Tale of the Krakow Dragon Smok while in Krakow, Poland. These stories stimulated her imagination to write her own stories (See her blog, Oct. 1, 2013)

Learned about Conservation: In Australia, Sydney and her parents worked on a permaculture farm. There she helped build things, collected eggs, and milked cows. Here’s what she says about permaculture: (picture Building a chick box) 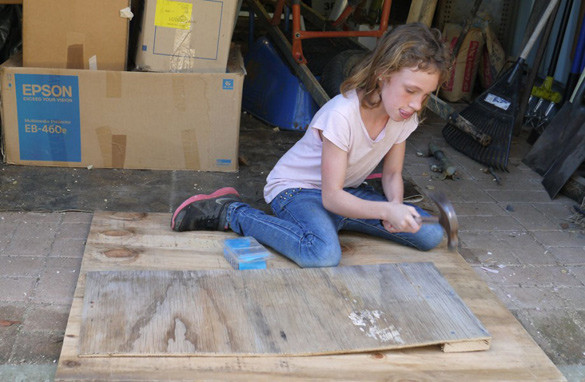 Diversity of birds and animals on this planet: She blogged about koala, kangaroos, Tasmanian devils, birds of Florence, and birds of various national parks. She has seen and experienced unique and unusual animals not found on this continent.

Fine Art: She experienced art around the world, from France to Malaysia. They went to the Louve, in Paris. In her blog, she recommends you see the “Mona Lisa” first because she is famous. Sydney writes, “What makes the Mona Lisa famous? Do her eyes follow you? Is she happy or sad? Why do you like her? I like her because her eyes follow you. She has a tender smile. She is maybe thinking of how lovely her painting is going to be.” She also took an art class. I took art classes about Egypt. I learned that Egyptians built a palace for the kings and queens. (Dec. 27, 2012) 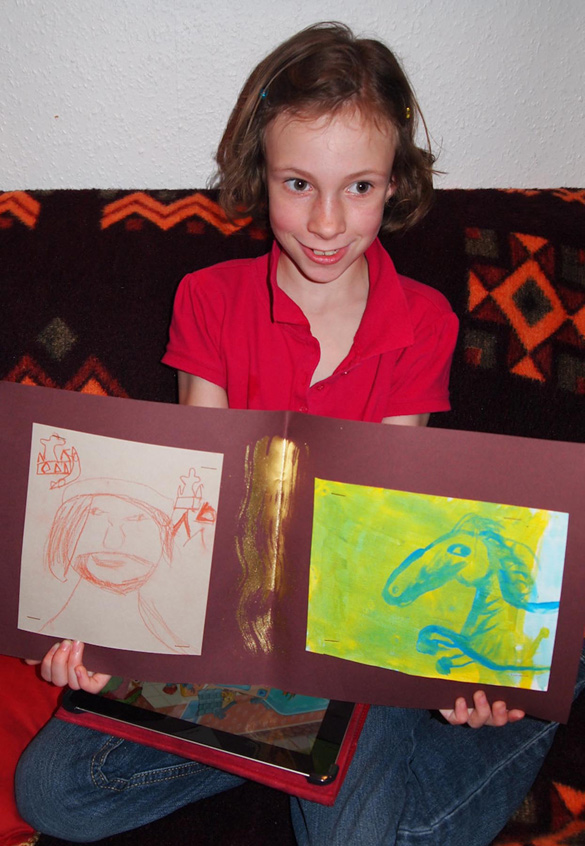 Sydney Frazier with drawings she did in an art class at the Louvre. Photo by Jason Frazier

She has learned to dream big: Like many little girls, Sydney loves horses, but she was lucky enough to take lessons in other countries and see different types of horses. She writes, “When I grow up I want to be a farmer with five other friends. Here are the animals that we are going to have on the farm: pigs, cows, elk, chickens, goats, a cat, a dog, lamas, sheep, fish, frogs, geese, mules, donkeys, ducks, bunnies, and of course, horses. I love horses.” For those of us raised on farms, we smile, for the dream is big and the animals many!) 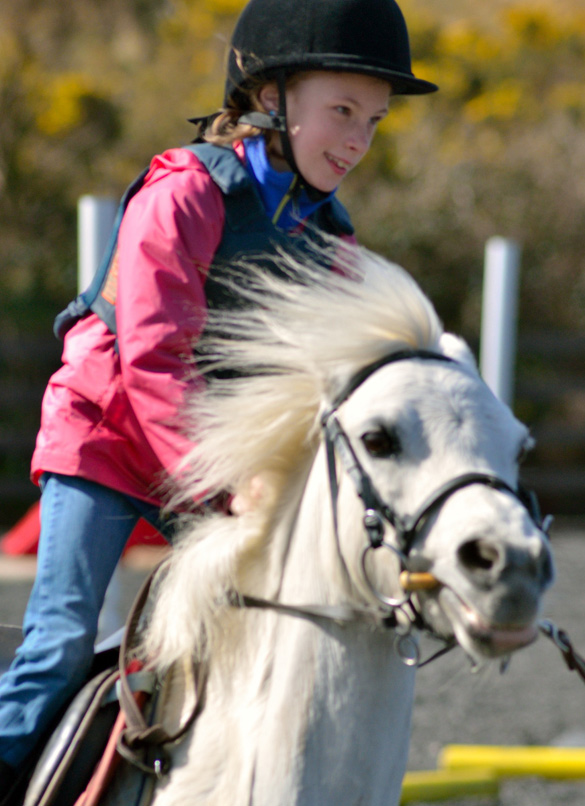 I asked Jason and Kerri, “How was it traveling with an 8-10 year old? What were the drawbacks, what were the positives?”

Their answer: “Traveling with our daughter has been very positive. It’s amazing to see the wonder in her eyes when exploring castles, ancient ruins, or seeing native birds and animals in the wild. Traveling long-term has provided an education that could never be achieved in a classroom setting. Besides the added education she has received, she has also opened a lot of doors for us. The local people we met while traveling were much more willing to interact with us and to invite us into their lives, and houses, due to having her with us.

The only drawback, traveling for two years with a child, is the lack of social interaction with kids her own age. In many countries, there was a language barrier, and even though she tried her hardest to interact with them through the use of pantomime or the local language to ask them to play with her, many times they still did not understand. I think she often wished she had a sibling so that she had someone to play with.”

When asked whether they would continue homeschooling when they return, Jason and Kerri said, “No, she will be returning to school. We have a great appreciation for teachers! We still plan to travel in the future and at those times we will resume homeschooling.”