Libertarian Party: Income Tax Anniversary Oct. 3 Is Another Day That Will Live In Infamy 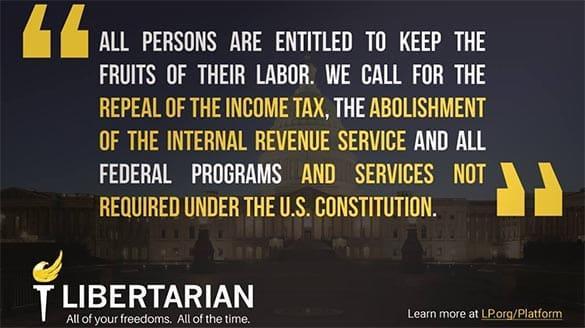 Oct. 3 is the anniversary of the costliest law ever enacted upon American taxpayers. On that day in 1913, President Woodrow Wilson signed the Revenue Act of 1913, the first post–Civil War income tax. Once constitutional objections to an income tax were eliminated by the 16th Amendment, Congress wasted little time in passing one. The tax started out at 1–2 percent for most middle-income people and topped out at 7 percent for inflation-adjusted incomes of $11,010,700.

“What’s interesting is that the income tax was passed in conjunction with a lowering of tariffs from 40 percent to 25 percent,” said Libertarian National Committee Chair Nicholas Sarwark, who is also currently a Phoenix mayoral candidate. “Today, income tax rates range from 10 percent all the way to 37 percent — and that’s after the 2017 tax reductions. To add insult to injury, the Trump administration, acting with little participation from Congress, is bringing back tariffs that are nearly as high as they were before we had an income tax.”

The U.S. unemployment rate in 1913 was 4.3 percent, and there was essentially no inflation because of the gold standard. Per capita economic output was the highest in the world. The streets were paved. Cities were electrified and had fresh water and modern sewerage systems. We had inter-city rail service. We had the world’s largest industrial sector. Immigration was mostly open, except for unfortunate xenophobic restrictions on Chinese and Japanese immigrants. Hundreds of thousands of immigrants, mostly from Europe, arrived every year. The average person could live large. All this was possible even though the federal government spent only about 3 percent of Gross Domestic Product, including a tiny deficit. State and local governments did not spend much more.

Today, after 105 years of government growth, the unemployment rate average over the last five years is about 5.2 percent. Today, according to the World Bank, the United States ranks eighth in GDP per capita behind Luxembourg, Switzerland, Macao, Norway, Iceland, Qatar, and Ireland. Our infrastructure is deteriorating. We rank second to China in industrial production. We’ve choked off most immigration. And now, according to the Heritage Foundation and the Wall Street Journal, federal taxes amount to 25.1 percent of GDP. At the same time, federal spending has increased to 41.6 percent of GDP, producing year after year of vast deficits both on and off the books.

“A 13-fold increase in per capita federal spending has benefited government bureaucrats and crony capitalist insiders in the defense, intelligence, education, and medical care industries,” Sarwark said. “It hasn’t done much for the common person.”

The approximately 800 Libertarians running for local, state and federal office this year will all work to reduce the size and scope of government at all levels.