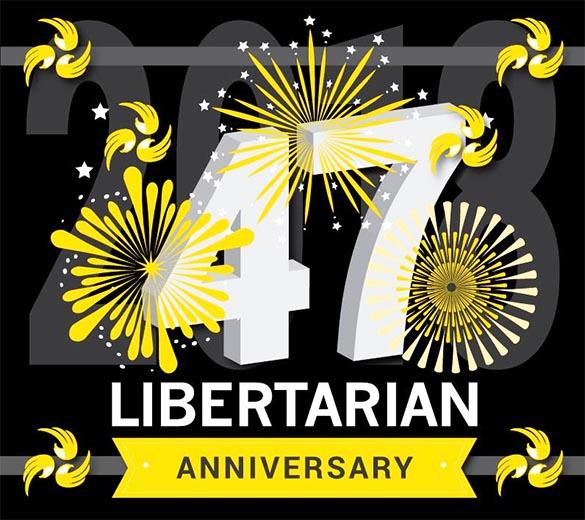 The Libertarian Party was conceived 47 years ago in the living room of David Nolan, and officially founded in Colorado Springs Dec. 11, 1971.

The issues that inspired the creation of the Libertarian Party in 1971 are still pressing in 2018, and have become even more serious.

The Vietnam War, the longest war in U.S. history at the time, entered its 16th year in 1971 when the United States invaded Laos in a vain attempt to shut down the Ho Chi Minh trail. That effort failed, and the war would continue until 1973 when U.S. forces withdrew in a de facto defeat. This year, the U.S. war in Afghanistan became the longest war in U.S. history. We continue to be involved in more undeclared wars in Yemen, Iraq, Syria, and elsewhere.

President Nixon effectively ended the gold standard in 1971, making it possible to fund the Vietnam War and the Lyndon Johnson–era Great Society programs by effectively printing new money instead of raising taxes. The U.S. budget deficit grew in one year from $3 billion to $23 billion, or $110 per person. This year, ongoing undeclared warfare spending and ballooning entitlement spending — which has been aided, abetted, and enabled by continuing expansionary monetary policy from the Federal Reserve — has led to a deficit of $833 billion, or $2,532 per person.

The Pentagon Papers were released in 1971 to the New York Times and the Washington Post, which printed excerpts. Daniel Ellsberg, the whistleblower who released the documents, was charged with violation of the Espionage Act of 1917. He was found not guilty. This year, Edward Snowden and Julian Assange, who had released similarly embarrassing information about government malfeasance, have both been threatened with prosecution under the Espionage Act of 1917.

Cigarette advertisements were banned from television in 1971. This year, the Food and Drug Administration is in the process of outlawing menthol cigarettes and restricting the promotion of vaping products.

The federal government bailed out Lockheed in 1971 with a $1.4 billion loan, which amounted to $2.73 per person. This year, the Donald Trump administration bailed out farmers to the tune of $12 billion in order to repair the damage done to farmers by Trump’s tariffs. That amounts to $36.47 per person today.

Richard Nixon declared a war on drugs in 1971, setting in motion one of the most destructive and counterproductive government policies of all time. This year, Congress passed yet another new draconian drug law, this one aimed at opiates.

Undeclared, unnecessary wars continue unchecked and are becoming more and more lethal and expensive. The financing of government with unsecured debt has grown exponentially. Government spying on its own citizens and cracking down on whistleblowers has become more sinister. Nanny-state regulations that micromanage what people smoke eat and drink has become even more intrusive. Government bailouts of crony capitalists have skyrocketed in cost and frequency. The war on drugs has intensified apart from the inspiring exception of marijuana legalization, which has been inspired by libertarian activism at the state level.

The original Libertarian Party had only 70 members, but today exceeds 130,000. On its 47th anniversary, the Libertarian Party has won its most consequential election ever. Jeff Hewitt was elected as to the Board of Supervisors in Riverside County, Calif., the 11th-largest county nationwide with a population larger than 25 different states. He explicitly ran on a platform of fiscal sanity and pension reform. Although public-sector unions fought him every step of the way, Hewitt challenged the third rail of American politics and prevailed. A total of 53 Libertarians were elected or re-elected to public office at both city and county levels in 2018.

Perhaps most importantly, the Libertarians are the only party on the political spectrum defending both economic responsibility and social acceptance. Democrats continue to champion the kind of social welfare policies that have led to the economic collapse of countless countries, from the Soviet Union to Eastern Europe to Venezuela to Zimbabwe. Republicans continue to promote subsidies and special favors for crony capitalists and the military-industrial complex, which make the average citizen poorer and less safe. Both parties continue to tread mindlessly on the civil liberties of American citizens, raiding their bank accounts and dictating their life choices at every step.

Libertarians, for 47 years, have championed these universal principles for civil society:

“The Libertarian Party is giving American voters more choices at the ballot box,” said Libertarian Party Interim Executive Director Lauren Daugherty. “This is an extraordinarily important thing. And we are giving them candidates who represent the most fundamental American values: liberty and justice for all. Increasingly, as more and more Americans learn about our candidates and values, they vote for Libertarian candidates to represent them. I think we’ll see substantial growth in 2019 and 2020.”

This is only the tip of the iceberg. The 53 Libertarian Party candidate wins this year are a precursor for many Libertarian victories to come.