Letter To The Editor: Science, Policy And Earth Day

In Honor of Upcoming Earth Day: Are Science and Politics Immiscible Quantities?

“Americans have reached a point where ignorance, especially of anything related to public policy, is an actual virtue,” the scholar Tom Nichols writes in his timely new book, “The Death of Expertise.” “To reject the advice of experts is to assert autonomy, a way for Americans to insulate their increasingly fragile egos from ever being told they’re wrong about anything. It is a new Declaration of Independence: No longer do we hold these truths to be self-evident, we hold all truths to be self-evident, even the ones that aren’t true. All things are knowable and every opinion on any subject is as good as any other.”  –“The Death of Expertise Explores How Ignorance Became a Virtue”, book review by Michiko Kaukutani in the NY Times.

A couple things made me want to write a short essay on science v politics in light of the upcoming March for Science. One topic came up in the Legislature and one in the Santa Fe New Mexican. Here are the two issues. Both involved mixing science and politics in a way that was not honest to the science. For science to be representing itself as objective, it has to be safely insulated from politically driven outcomes. One has to be willing to gore one’s own ox.

I worked quite a bit with Rep. Stephanie Garcia Richard on HB-50 this term. As anyone who has followed the North Mesa Mutts blog knows, I was critical of the bill she pre-filed and worked to craft a bill that would not be so polarizing. By the time a less onerous bill was introduced, it was too late to make any difference. But the science issue was the skewing of discussion by making invalid comparisons. Everytown for Gun Safety and to some degree our representative claimed that states with universal background check laws have a roughly 50 percent lower rate of domestic violence homicides and shootings of police. But even the sympathetic Politifact only gave that a rating of “half-true” and glossed over critical issues.

Politifact considered “background checks” in 14 states, California, Connecticut, Hawaii, Illinois, Iowa, Maryland, Massachusetts, Michigan, Nebraska, New Jersey, New York, North Carolina, Rhode Island and Pennsylvania. But this comparison is false on its face.  These fourteen states differ in sociology, gun ownership rates, and in having quite different sets of gun laws (for a review of state gun laws, go here). All but two have extremely restrictive gun laws. For example, permits to purchase and heavy restrictions on handgun ownership are present in California, Connecticut, Hawaii, New Jersey, and New York, most of which have “may issue” handgun permitting laws (i.e., a law enforcement official can deny a permit application not on the basis of an applicant’s qualifications but on a poorly defined law enforcement opinion of your suitability). A Firearms Owner Identification Card is required in Illinois. Etc. Finally, the before/after study of gun laws v gun crime in Connecticut involved the imposition of both a background check and permit to purchase system.

Another bit of political science was played by former Los Alamos resident Tony Heller in a recent New Mexican article. But his article is weak. After disputing the value of using polls of scientists to decide topics regarding climate change, Tony tells us that “…There are tens of thousands of scientists who agree with (EPA Secretary Scott) Pruitt’s questions about human impact…”. So really. Do we decide these things on poll v poll? Do we even know the credentials of who was polled?

The real issue where we can likely get consensus in the geophysical and geochemical community is that massively increasing CO2 in the atmosphere over pre-industrial (but post-Pleistocene) levels will affect climate sufficiently to impact human activities. The question is how much, and at what cost to adapt or mitigate.

On that topic, in a recent paper discussing the uncertainty of climate calculations and the resulting effects on mitigation, Yoichi Kava, Mitsutsune Yamaguchi, and Keigo Akimoto review the present state of uncertainty on climate sensitivity to CO2 and note that in going from AR4 to AR5 (i.e., the Intergovernmental Panel on Climate Change’s 4th and 5th assessments of climate change)  the consensus value for equilibrium (not transient) climate sensitivity (“ECS”) to CO2 went from an estimated range of 2.0-4.5 deg C per atmospheric CO2 doubling to 1.5-4.5 deg C. Lewis and Curry put the range considerably lower (see discussion in their link).

But its the uncertainty that kills planning. The authors show a graph of their estimated abatement costs to keep the equilibrium temperature from rising more than 2 deg C (i.e., the Paris accords) for a climate sensitivity value of 3 deg v 2.5 deg per doubling. The cost estimates for the two sensitivities differ by roughly an order of magnitude when run out to the half-century. There are undoubtedly other calculations out there as well; I’m not trying to cherry-pick. This is a blog, not a research paper. 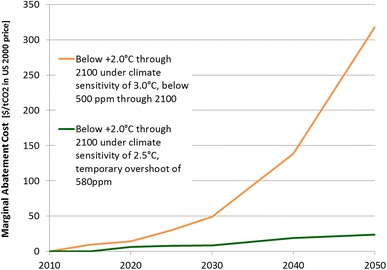 Imagine wanting to buy a house and not knowing if the total costs of home ownership were $250,000 or 2.5 million dollars. Now, imagine yourself a politician trying to decide on a path forward on climate policy using those same economic uncertainties. Small wonder that folks want to believe the version of science that fits their own interests.

The problem is, underestimating climate sensitivity could be a disaster. If climate sensitivity is on the low side, then even if we overshoot emissions the results could  be quite manageable in terms of sea level rise and other modelled changes. As Judith Curry has said on her blog, if reality conforms to the high sensitivity tail of the various climate model’s uncertainties (and note these are all forward projecting models) the resulting costs would likely be very high.

For a recent, real world example of underestimating Ma Nature, one has to only look at the Fukushima disaster. TEPCO built a 20 foot seawall because it underestimated the highest likely tsunami. Ma Nature handed the company a 45 foot tsunami. The rest is history. Imagine a disaster like that on a global scale.

There was an excellent article in a recent New York Times about the Death of Expertise. We need to know the difference between “facts” (i.e., careful observations and well grounded, properly qualified interpretations) and fiction. We may not like the reality that “facts” tell us, but its the real facts that matter, not the fiction. Plus, we may often have to make decisions on facts that are not known very well but nonetheless contain useful, factual information. But in so doing, science needs to be science, not politics while policy makers need to act on the basis of trust in what scientists are telling them, fully realizing that we can’t know everything. Kava et al say it best in closing:

“It is clear…that the impact of a mere 0.5 °C difference in climate sensitivity is of critical significance for policy objectives, which is especially significant given the large uncertainties over climate sensitivity. It is scientific community’s vital role to narrow the uncertainty range of ECS. At the same time it is critically important for policymakers in Paris to know that they are in a position to make decisions under large uncertainty of ECS.”