Letter To The Editor: Forest Service, VCNP And NPS Are Not Neighbor Friendly

Over the past five years, I’ve been wanting to make the public aware of how the Forest Service, Valles Caldera National Preserve, and the National Park Service interact with individuals who border this Jemez treasured property, the old Baca Ranch.

This property has been my backyard for 22 years, bordered on two sides. During this time, the owners and family – the Dunigans, their staff from ranch managers, wranglers, CEOs and the Baca Patrol – were very neighbor friendly and I want to thank all of them for their kindness, invitations to the cowboy parties and family gatherings, and working together with me, as a good neighbor.

I also want to thank the previous Board of Trustees (2005) that worked with me on the grandfathered use and agreement, allowing my horses to continue to graze and run free.

During this time, a lot of poaching was happening in this area, and with the assistance of the Baca Patrol and Game & Fish agents, most of the poaching stopped. Behind my house was a five-acre fenced surveyed lot, which at one time was for sale, but I was unable to purchase it before the sale of the ranch in 2000. I was allowed to use this area to graze or let my two horses run periodically, due to the fact I was a good gatekeeper.

After the sale of the ranch, many attempts were made to the VCNP management at the Los Alamos Offices on my use of this five-acre lot. In May 2005, I started employment with the Valles Caldera National Preserve as a recreational assistant, which included the horse program and other activities.

During that time, I was told by the VCNP management and crew that there was a plan to put student housing and road equipment behind my house, which was talked about over lunch. I was so upset to think I moved to the Jemez to live by student housing and road equipment, so I talked to my attorney and the neighbors about this so-called plan. I was advised to contact the VCNP Board of Trustees to discuss this matter, which I did.

The chairwoman and vice chairwoman made an appointment with me to assess this five-acre lot, which they did. They took photos and at that time I addressed the use of my two horses running and grazing periodically plus that I had maintained the surveyed fence at that time was 10 years, which included replacing an old wire fence gate with a new metal gate on my property fence that accessed the five-acre lot.

I was told by both the chairwoman, and vice chairwoman that all of this would be presented at the next Board of Trustees meeting. At the beginning of 2006, I received a call from the chairwoman that the Board had agreed to grandfather my use of this five-acre lot for my two horses, but couldn’t come up with a grazing price figure since my horses were not over there 24/7, plus the fact I was a good neighbor and gatekeeper, which they appreciated. All of these Trustees had their terms until 2010, and I was told that if anything changed, I would be notified by the new Board of Trustees.

On Feb. 8, 2011, at 10:30 a.m., in a major blizzard with a temperature of nine degrees and almost zero visibility, two of the VCNP’s management crew drove behind my house, almost got stuck in 6+ inches of snow and headed toward the back five-acre surveyed fence. I hopped the fence to asking them what they were doing, and they said for me to talk to the VCNP management, that they had been ordered to take down the fence.

I came in and contacted my attorney, and the previous Board of Trustees chairwoman and vice chairwoman, who were both in shock about the whole situation and stated that I needed to put this action in the Santa Fe New Mexican and Jemez Thunder newspapers.

I decided to take a different approach to try to work with VCNP management and the new Board of Trustees, which had failed in all aspects of the matter. A week later, my new metal gate, which accessed this five-acre lot with two-inch pipe, was closed with three strands of barbed wire with a VCNP sign stating “NO ACCESS”! 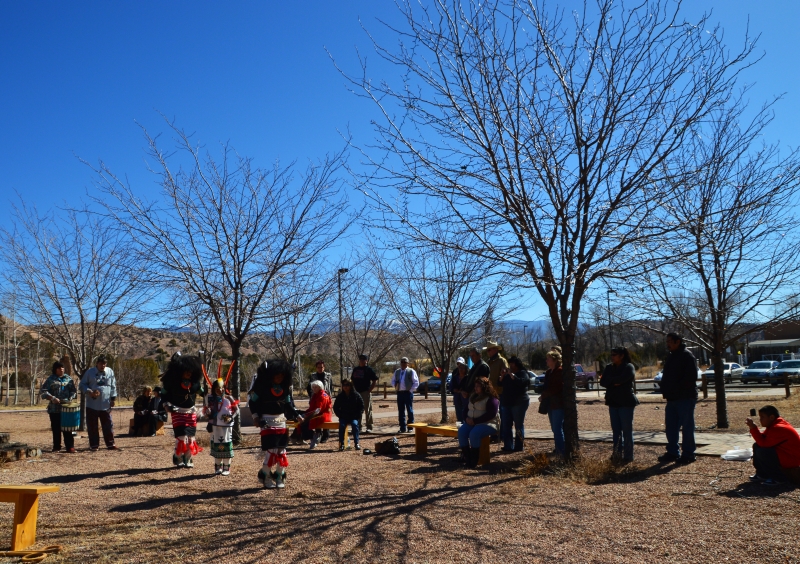 The workers had used a come-along and had made the barbed wire so tight that it pulled the two-inch pipe from the concrete in the dirt. Now my gate is all messed up, and will cost me about $500 to fix it, including the money I spent on maintaining the five-acre surveyed fence for 16 years. 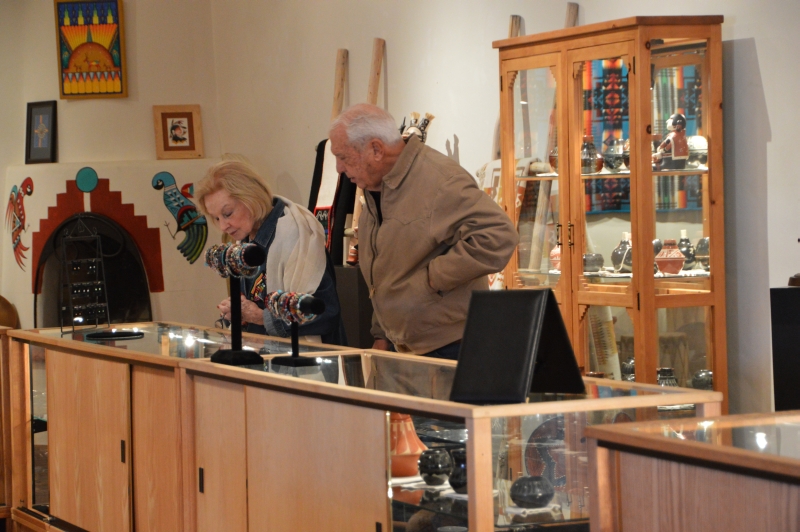 I contacted the VCNP executive director, and we had a meeting and he told me that all he was told was that a gate was wired shut and a fence had been taken down. I contacted the new Board of Trustees chairman several times, who finally said he would look into it. I then contacted both of New Mexico’s Senators, one of whom was in the process of retirement.

Nothing was ever resolved after many attempts to come to agreements with attorneys and the VCNP executive director, including their statements “boundaries can’t be compromised,” plus several contact attempts from both Senators’ field workers. One Senator field representative stated to me, “They can do what they want to”!  Really? This government agency can damage an owner’s property without notifying the owner? I had no choice but to put up 24/7 security cameras and reactivate my electric fence.

This whole action against me and the agreement from the previous Board of Trustees including the 16 years of use of this five-acre lot just didn’t matter to anyone. This whole action is government bullying, poor public relations, poor management, poor communication, no notification of change from the new Board of Trustees, damage to my property gate and fence, which borders the VCNP and an act of harassment because I’m a woman!

I attended several new Board of Trustees meetings in Albuquerque to try to get this situation resolved, but I wasn’t allowed to speak at any of the meetings, because the new chairman stated it was in litigation, which wasn’t true: no lawsuit had been filed. Not one of the new Board of Trustees chair or vice chair ever came out to review this five-acre lot, to even try to resolve the previous agreement, including the damage to my gate.

One Board of Trustees member stated to me after one of the meetings that he “was so sorry I was treated this way”! When the Forest Service survey crew was out a few years ago, they told me that five-acre surveyed fence should never have been removed without going through the proper channels.

Last year, when a notice went out about the VCNP changing hands to the National Park Service, I thought it would be a good idea to meet with their new management. I did meet with NPS management, who seemed to want to work with me, but took no action.

In the April 15, 2015 edition of the Jemez Thunder, the acting Interim NPS Superintendent stated that he was “thrilled… to work closely with other agencies, tribal governments, and Trust staff,” but made no mention of working with local neighborhoods within this community. Since then, a new NPS superintendent was assigned, who replaced the VCNP executive director when he retired. Again, I made several attempts to contact the new NPS supervisor, and I even contacted the head office in Denver including an email to the regional director, who seemed to blow me off, too.

I was told by the NPS Denver Office that this situation needed to be resolved with the Trust before Oct. 1, 2015, but after that date the Trust would continue working with NPS. On Oct. 15, 2015, on the front page of the Jemez Thunder was a photo of the NPS and VCNP management, celebrating the Grand Opening, and not one of them ever tried to work with me to resolve any issues.

My two horses had grazed on this five-acre lot for 16 years before the removal of the surveyed fence, plus I maintained the fence during that time, cleaned up the area when the individual leasing was terminated by the Baca Ranch management (four truckloads of crap) before the Forest Service purchased the Baca Ranch.

During the time my horses grazed on this lot, when the Thompson Ridge Fire came through on May 31, 2013, the firefighters said to me, “You graze your horses over here”? I said I used to until the fence was taken down, and they stated, “Due to your horses grazing and keeping the grass height down, they saved Rancho de La Cueva when the fire jumped the fireline on the south end of the five-acre lot in the early morning hours of June 1, due to high winds.”

It is sad that the VCNP management under the Forest Service took this action without notification from the new Board of Trustees, damaged my property gate, broke an agreement that was approved from the previous Board of Trustees, including my signed petitions from neighbors, friends and family against this action.

Is this their way of being neighbor friendly? All I can say now is the trust that was established in the very beginning and existed for many years has been forever tarnished on this treasured Jemez property.

Just recently, the Forest Service put in cattle guards on Winter Road and Sulphur Canyon Road, and not one notification went out to any of us that live in the area for any input to this action.

Cattle are in everyone’s yards now because the FS fences haven’t been maintained in years. New Mexico is a “free roaming state,” and the cattle guards were installed to keep the cattle off the roads because drivers have hit cattle on the highway.

My opinion is this: if you hit a cow on the highway, you are driving too fast. None of us seemed to have had problems with the cattle until the cattle guards went in – again, not a neighbor friendly action, including the actions taken against the cattle ranchers. Now there is a concern since the cattle are fenced in our area, that the cattle have no access to water since the FS put fencing up and down the Redondo Creek when they planted the willows several years ago, which most have died.

I hope we can solve unresolved issues and work together on becoming more neighbor friendly in the future, and fix the damage that was done to me 2011.

The Truth is the Truth, and I have the documentation.