Letter To The Editor: Can Mankind Really Expect To Tame Earth’s Climate And Remove It From Cosmic Control?

“A whopping 97 percent of all scientists agree that human activity is causing our climate to change” (see letter). But only 40 percent of all Americans believe this because of “pseudo scientists” and special interests.

Cleaning up the environment to make life livable is one thing: for example, cleaning up the air in steel mill towns and that emitted from uncontrolled, coal-fired, electrical generating stations and the water in streams in mining areas, etc. Controlling the climate of the earth is a bit “bigger” task!  And as John Bartlit of NM Citizens for Clean Air and Water has pointed out (See column), who gets the favorable climate at the expense of the rest?

Seems like the short-term version of climate change is what these “scientific” folks are concerned about. Actual long-term data for 100s of centuries(!) indicate that mankind will have quite a battle against the “Big Chill” that lies in front of it!

Current global temperatures are relatively constant compared to the long-term trend. Ice caps are responding to  calories already deposited to oceans (it takes a while for massive chunks of ice to respond – think about ice cubes in water and about how cold that ice water eventually get dissolving those ice cubes).

How do these proponents of climate control plan to get mankind to the next warm spell – about 100,000 years from now? Mankind needs to be thinking about how to feed and heat itself for a 100,000 years of cold climate. Droughts, etc now are minor compared to what mankind will face down the road.

What I see is that the advocates of humans making climate changes are NOT looking at the long-term, but rather at the short–term. A question: Is the green-house effect of CO2 countering a natural cooling that the earth might already have begun to experience and thus is giving mankind some “extra” warm years? The story, A Look On The Brighter Side Of Global Warming, published in Sunday’s edition of the Los Alamos Daily Post, highlights some of the presentations given in the conference held in Santa Fe this past weekend. Knowing how to create some warmth may be to mankind’s benefit! For how long, however?

“The Molding of Mankind – The Earth in a Thermal Vise” (http://gsjournal.net/Science-Journals/Essays/View/5982) takes a look at the long-term. Some scientists think we can control the short-term. For how long, even if possible? 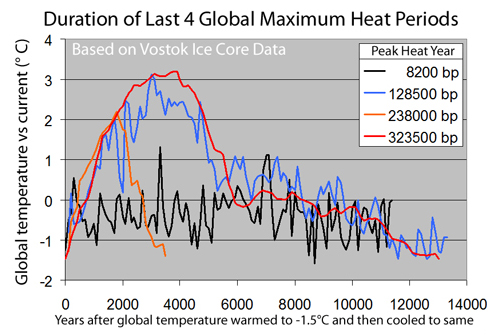 Readers might want to acquaint themselves with the broad picture as well as the short-term “pitch” of “Can Scientists Become Sales Agents?” Mankind’s recorded history only covers a few millennia and the temperature changes during this period have been minor compared to those over a millennia of millennia! By and large, we think about today, tomorrow, next week and maybe some decades into the future.

Even if mankind can dramatically manage climate behavior during our current, “relatively smooth”, warm period, what are the prospects of taming the “extreme” periods – namely, extremely long Big Chills? What technologies should mankind be working on to sustain even a modest population level during the major part of the next 100,000-year cycle?