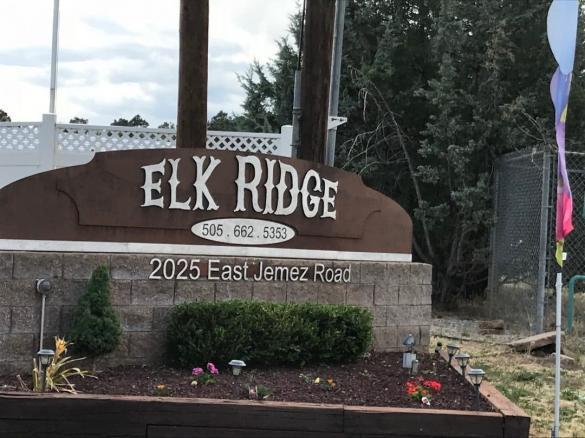 Residents report that the letter was hand-delivered by a maintenance worker at the park but also say that a new manager, Tina Burr, has shown up at their doors threatening fines and evictions if certain conditions have not been met by tenants. The Los Alamos Daily Post attempted to speak with Burr Thursday afternoon at her office by she refused to answer questions saying only that if tenants have issues, they need to go to her office and that she is not at liberty to talk about “community guidelines”.

Burr gave the Los Alamos Daily Post contact information for “regional management” at Yes! Communities, which manages the park, however multiple calls leaving messages for company representatives including Regional Manager Chris Seifert have not received a response. Residents report that Burr and another employee at the Elk Ridge Office left Friday afternoon after allegedly designating responsibility to a maintenance worker. Several residents report not being able to get an answer from multiple phone numbers for the company.

Meanwhile, residents have been desperately contacting state landlord-tenant rights groups, contemplating petitions and trying to get a response from regional management for the company. Calls to the New Mexico Landlord-Tenant Hotline indicate that a tenant must have a credit card to pay a $35 fee to even initiate a discussion on a problem and that the agency is not state-funded.

As the Los Alamos Daily Post discussed the issue with three residents outside an Elk Ridge home, several other residents appeared saying they wished to express their concerns.

“We are particularly upset with the tone of the letter. We understand that there are issues that need to be resolved in the park with certain lots but the thing to do would be to address them with those residents, not have the same rude letter delivered to everyone who lives here,” said one resident who has been living at the park for six years. “Just because we live in a mobile home park doesn’t mean we don’t deserve respect.”

She said her family has had several issues with management since they moved in including failure to respond to a sewer back-up, which was reported at 11 a.m. on a Friday and had no response until 11 a.m. the following Monday. She also reported that the company removed a butterfly bush from outside her residence without ever speaking to her. Other tenants also reported longstanding shrubbery and trees being removed without notice. She said this is the third management company she has had to deal with since moving in.

Residents say a glossy monthly newsletter published by Yes! Communities could have been used to put residents on notice about some of the issues that are now being raised as a matter of urgency to be handled in three days.

“The May issue of the newsletter contains a recipe for champagne strawberry cupcakes, a word search and an article on endangered animals. I mean, what the heck?” one resident said. “They could have used the newsletter to get information out instead of a poorly written, inflammatory letter without even a signature on it.”

Another resident reported that Burr refused to take money from her to bring her overdue rent up to date when she gave her a three-day notice. She claimed that Burr asked her neighbors to give her access to their residence so that Burr could see if the tenant was hiding from Burr in her back yard.

Many residents are concerned by a provision stated in the letter that rent is due on the first of the month, will be considered late on the second and tenants will be “scheduled for eviction” on the sixth of every month. A check with Los Alamos Magistrate Court staff revealed that a landlord can post a three-day notice on a property but after three days they have to file a petition for owner restitution and the tenant will be served with a court date. Officials of other property management companies in the community indicate that “throwing someone out on the street for being late with their rent on the seventh day just isn’t going to happen”.

The letter delivered to tenants says the company will be “working diligently to enforce the community guidelines that have been in place since your move-in here at Elk Ridge. Below are only a few that need immediate attention so we are reaching out to you as a courtesy before fines come in place”.

One of the “guidelines” states that anyone leaving a pet in their yard unattended will be subject to eviction as their rules state “pets need to be on a leash and (sic) unsupervised”. The company advertises that the park is “pet friendly”, one resident said, adding “but they are not even human friendly!”.

Street parking is prohibited 10 p.m. to 7 a.m. Additional parking will be available at $35 a month in the storage area.

“We have four folks living here and only two parking spots,” one man said.

“New management is not honoring signed leases. I recorded the last manager saying that a six-foot fence is allowed and she showed the parameters allowed. New management is threatening to tear down new fence and charge for labor,” a resident said.

One mother said she is sad that her children have to get rid of their playhouse and Flintstones cars, which are put away nearly against their fence.

“Why rent to families with kids if they can’t use their yards?,” she said. “Who wants to pay $500 for a shed and who wants to have to drag their grill inside every time they use it?”

Clothes lines are also forbidden according to the “community guidelines”.

“None of us are high-income people here at Elk Ridge. We just wanted to be treated fairly. Nobody I talked to can afford an attorney,” one woman said with tears in her eyes.