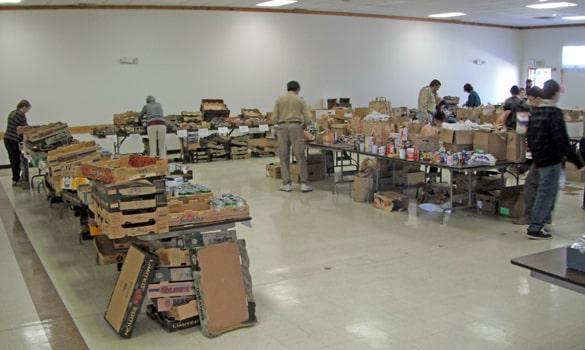 Volunteers sort food at the Knights of Columbus hall during the food drive in 2010. The K of C donates its hall for the food drive. Additionally, REMAX FIRST offers its moving truck to the drive and TRK gives its storage cage to LA Cares. As food comes in, it is placed on tables in the center of the room in the hall and Boy Scouts, adult leaders and LA Cares volunteers sort the food into boxes around the outer perimeter of the room. Courtesy photo

Saturday, local letter carriers, Boy Scouts and Cub Scouts will be out in force around the community. Their objective? To “stamp out hunger.”

Residents are encouraged to leave food donations beside their mailboxes no later than 10 a.m. Saturday. Cub Scouts also will be stationed 9 a.m. to 5 p.m. Saturday at Smith’s Marketplace in Los Alamos and 9:30 a.m. to 4:30 p.m. at Smith’s Food and Drug in White Rock to pick up collections.

“(The) drive is extremely important to us because it carries us through the summer,” she said.

Food Drive Coordinator Bill Blumenthal said on average, about 15,000 pounds of food is donated to LA Cares through this food drive. Broken down, that is one pound per capita. The hope this year, he said, is to double that.

Burns  said this allows LA Cares to feed 80 families per month or about 200 individuals.

Non perishable food items that are not in glass containers will be accepted. More specifically, Burns said LA Cares is always in need of fruit juices and cereals that are not sugary. Canned chicken, canned pasta sauces are also in high demand as well as cleaning products, personal hygiene items and toilet paper.

Any donation is welcome. According to a press release, it may be surprisingly to learn that even in Los Alamos, which is presumed to be a prosperous community, there are dozens of families, many with young children or elderly, who need help in addition to those in neighboring communities.  It is further reported in the press release that one in six Americans, many of them children, struggle to get enough to eat.

Plus, there’s a misconception that food banks only serve the homeless but some locally do struggle to make ends meet, Tim Pacheco, president of local branch 4112 of the National Association of Letter Carriers, said

Having access to the food pantry, he added, “it’s just beneficial for the whole community to have that to turn to in a time of need.”

The food drive is also beneficial to those who operate it.

Blumenthal said the Cub Scouts work the food drive tables at the grocery stores while the older Boy Scouts help with picking up the donations left by mailboxes.

He said the Cub Scouts “get to interact with the public. They are our public relations department.”

The older kids do the harder work and they enjoy seeing the community’s appreciation for their efforts. The food drive really helps them with their self worth and their sense of accomplishment, Blumenthal said.

The collaboration between the scouts and the letter carriers has been going on for years, Pacheco said. Initially the organizations did their own drives but decided to join forces.

“It’s been great,” Pacheco said, adding, “It’s been a mutual benefit. (We are) very thankful to have the scouts in it.”

If residents would like to contribute a monetary donation, they can send a check to PO BOX 248 in Los Alamos and a donation box is available at the Larry R. Walkup Aquatic Center. For more information, call LA Cares at 505.661.8015.