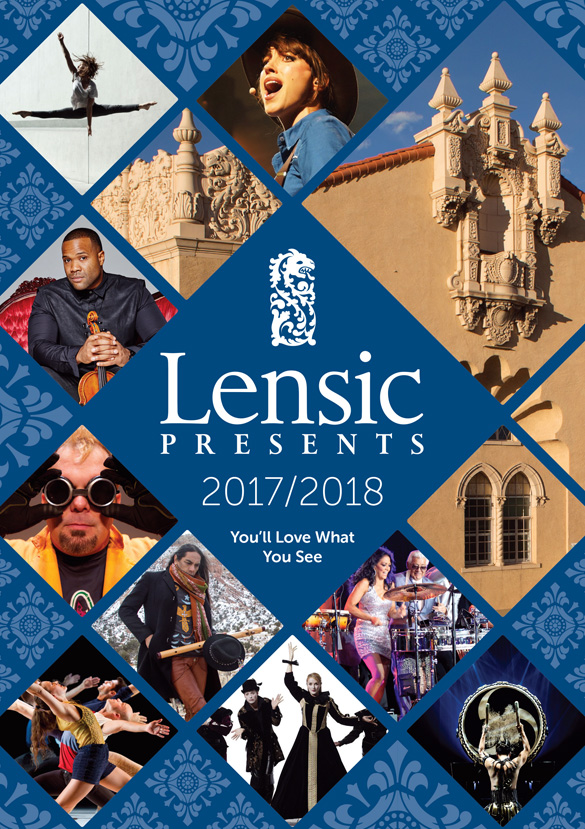 The season kicks off Aug. 26 with a concert from bluegrass/country legend Ricky Skaggs and his longtime band, Kentucky Thunder, and continues through May 3, 2018, with a diverse and exciting lineup of music, theater, dance and family events.

“We have stars of Latin, jazz, bluegrass, folk, and classical music, plus live theater, two cutting-edge dance companies, and two shows for young children and their parents,” Aalberts said. “There’s something here for everyone.”

Strengthening Our Commitment to Education: More than half of the 18 new Lensic Presents events will have educational components, from pre-show activities and discussions to off-site educational workshops and, as always, free daytime performances for students in the local public schools.

“Providing young people with access to the arts remains a key part of The Lensic’s mission,” Aalberts said.

New Flexible Subscriptions: For the first time in its 16-year history, The Lensic is offering flexible subscriptions for the Lensic Presents season.

“It’s a buy more, save more option that gives people the freedom to choose which events they are most interested in,” Aalberts said.

Patrons who buy six or more tickets to one or more Lensic Presents events by July 14, receive discounts of 10 to 20 percent (depending on the total number of tickets purchased). Lensic members enjoy early access to both flexible subscriptions and single ticket sales, starting June 1. Nonmembers may begin purchasing flexible subscriptions June 23 and single tickets July 14.

Not a Member? Join Today for Early Ticket Access: Starting June 1, current Lensic members and those who become new members at the $100 level (or above) have the opportunity to purchase Lensic Presents tickets before they go on sale to the public. For more information about  memberships, contact Laura Acquaviva, development director, at 505.988.7050, ext. 1203, or Acacia Barnett, membership manager, at 505.988.7050, ext. 1217.

Tickets: Tickets are available online at Lensic.org; by phone at 505.988.1234; and in person at the Lensic, 211 W. San Francisco St., and the satellite box office at the Santa Fe Community Convention Center, 201 W. Marcy St.

Ricky Skaggs struck his first chords on a mandolin more than 50 years ago. Fourteen Grammys, eight CMAs, and dozens of number-one hits later, he’s a country and bluegrass legend and a leader in the roots revival movement. Joined by his longtime, all-star band, Skaggs is sure to raise the roof on The Lensic! Tickets: $46-$75

Feel the beat with the legendary father/daughter percussionists! Pete Escovedo, a founding member of Santana, has been breaking the barriers between smooth jazz, salsa, Latin jazz, and contemporary music for more than 50 years. Sheila E. famously collaborated with Prince, had her own top-ten hit with “Glamorous Life,” and is one of Rolling Stone magazine’s “100 Greatest Drummers of All Time.” Prepare for an evening of dynamic music and rhythms! Tickets: $42-$66

Daring string quartet ETHEL and Grammy-winning flute musician Robert Mirabal of Taos Pueblo join forces for a cross-cultural concert inspired by water and its essential role in life on earth. You’ll be immersed in a flow of music, narrative, and ritual that evokes timeless Native American traditions through contemporary music artistry. Delivered by these master performers, the sound is dazzling, breathtaking—even ecstatic. Tickets: $25-$45

Witty, wise, and nakedly honest, folk singer-songwriter Loudon Wainwright III has been moving and entertaining audiences for more than four decades. With multiple Grammy nominations and a win for Best Traditional Folk Album in 2010, the charismatic musician is an American treasure. Wainwright’s 2014 album, Haven’t Got the Blues (Yet), was named one of NPR’s Top 10 Albums in 2014. Tickets: $25-$45

These five Juilliard-trained siblings have but one mission: waking up classical music by introducing it to the wildest, largest, most excited audience they can find. With complex five-piano arrangements (playing on a total of 440 keys!), the five Browns—Ryan, Melody, Gregory, Deondra, and Desirae—reveal a deep connection to the music while bringing fresh energy and character to their sound. Tickets: $29-$59

Founded in 2012 by renowned choreographer and dancer Benjamin Millepied (New York City Ballet, Paris Opera Ballet, Black Swan), the awe-inspiring L.A. Dance Project has made an impact on the dance world with its contemporary approach to art and movement. The company is creating “a defining artistic vision for our time,” says the Los Angeles Times. Tickets: $55-$79

Creating a one-man musical universe, singer-songwriter Ralph Covert plays rock-and-roll for the grade-school set. Former frontman of the popular Chicago rock band The Bad Examples, Covert taps into the collective unconscious of parents who grew up with rock and want to share it with their children. “Forget sickeningly sweet ditties,” says The New York Times. “It is possible that Mr. Covert will turn out to be [the] genre’s Elvis Presley, or, at the very least, its Elvis Costello.” Come early (at 2 p.m.) for an hour of free crafts, games, and activities. Tickets: $15 adults; $12 kids 12 and younger.

Founded by Jim Long in 2005, Heritage Hotels & Resorts is a collection of culturally distinct hotels in New Mexico and is the largest independent hotel brand in New Mexico. Through their architecture, interior design, landscaping, cuisine, art, entertainment, and music, Heritage Hotels & Resorts provides guests with a very rich, authentic cultural experience. Hotel Albuquerque at Old Town, Hotel Chaco, and Nativo Lodge are located in Albuquerque; Hotel St. Francis, Eldorado Hotel & Spa, Hotel Chimayo de Santa Fe, the Inn and Spa at Loretto, and The Lodge at Santa Fe are located in Santa Fe; Hotel Encanto de Las Cruces is located in Las Cruces; and El Monte Sagrado and Palacio de Marquesa are located in Taos. Each Heritage Hotel donates a percentage of its revenue to cultural causes. The company and its affiliate companies provide over 2,000 jobs in New Mexico.  Find Heritage on Twitter at @HeritageHtls; on Facebook at Facebook.com/HeritageHotels and Resorts and online at hhandr.com

The nonprofit Lensic Performing Arts Center owns and maintains a landmark historic theater in the heart of Santa Fe, is the hub for year-round performing arts and culture, and serves the community through affordable artistic programming (including our Lensic Presents series) and groundbreaking educational programs that touch the lives of more than 14,000 students each year. For more information about our presentations and programs, visit lensic.org.