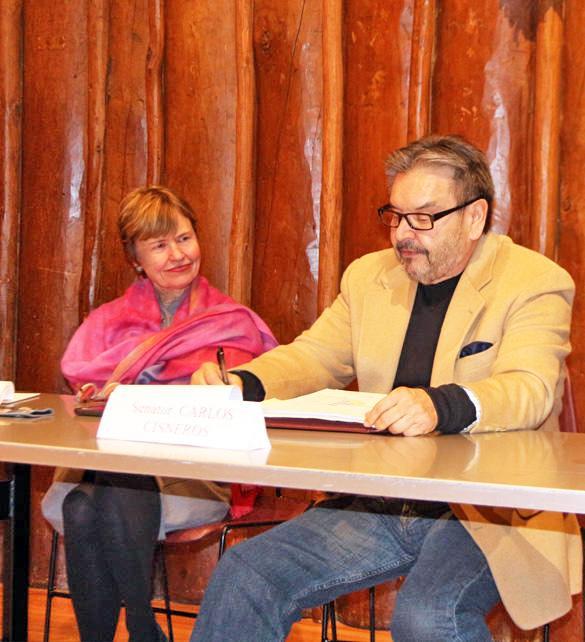 Community members fill Fuller Lodge Wednesday evening to hear the annual Legislative Update. Photo by Bonnie J. Gordon/ladailypost.com
By BONNIE J. GORDON
Los Alamos Daily Post
bjgordon623@gmail.com
New Mexico House Dist. 43 Rep.-elect Christine Chandler and Sen. Carlos Cisneros joined their constituents at the annual Legislative Update sponsored by the Los Alamos branches of the League of Women Voters and the American Association of University Women Wednesday evening at Fuller Lodge.
Sen. Richard Martinez was unable to attend due to illness. Robert Rhatigan from UNM Geospatial and Population Studies who is overseeing the U.S. 2020 Census in New Mexico also spoke and answered questions. His remarks will be covered in a separate report.
Chandler and Cisneros said they were delighted to be working together at the Legislature to benefit Los Alamos and the rest of their districts.
Chandler outlined her goals for the session.
“Education is on the front burner,” she said. “The governor has come out strongly for education and there is positive energy in the Legislature to solve problems. We’re all trying to steer the ship forward.”
Healthcare is an important goal, Chandler said, including the expansion of Medicaid. Criminal justice reform also will take center stage. A large number of bills are being introduced to improve the system and provide additional rehabilitation assistance to those for whom it is appropriate.
Chandler is involved with drafting legislation around comprehensive paid family leave, she said.
Both Chandler and Cisneros said they are championing SB11, which would ensure the taxability of the national laboratories in New Mexico – however they are organized – whether profit or non-profit.
Chandler supports legislation banning trapping on public lands and will be working with other legislators on fair regulation of water rights, she said.
“There are 20 new representatives and we all share an enthusiasm for change,” Chandler said. “I’m looking forward to being part of a team that makes things happen.”
Cisneros is serving his eighth term in the New Mexico State Senate. As a member of the Legislative Finance Committee, he said he has been working hard on the state budget, which will be unveiled next week.
Approximately $600 million is earmarked for education, another $600 million for capital projects and $300 million for local community projects, Cisneros said. Twenty percent of new dollars are earmarked for reserves.
“We want to make sure we’re prepared if a downturn in the economy should occur, he said.
“There are 400 bills pre-filed already, and new members can’t file until Jan. 15!” Cisneros said. “You’re going to see a lot of new ideas from our new legislature.”
Because of the many vetoes by former Gov. Susanna Martinez, the legislators are preparing a “rocket docket” requiring only one hearing for bills that have broad support, Cisneros said.
Both legislators support HB-51, repealing legislation from the 1960s that criminalized abortion in New Mexico before Roe vs. Wade, in advance of any changes on abortion regulation nationally.
Cisneros is a co-sponsor of the Health Security Act which would earmark $200,000 to explore single-payer health options in New Mexico.
“We need to gather the data necessary to make it a viable option,” he said. “We want to keep the discussion going.”
Menu
Los Alamos
72°
Fair
5:48am8:24pm MDT
Feels like: 72°F
Wind: 5mph NNE
Humidity: 32%
Pressure: 30.29"Hg
UV index: 2
SatSunMon
84/63°F
86/64°F
86/59°F
Weather forecast Los Alamos, New Mexico ▸