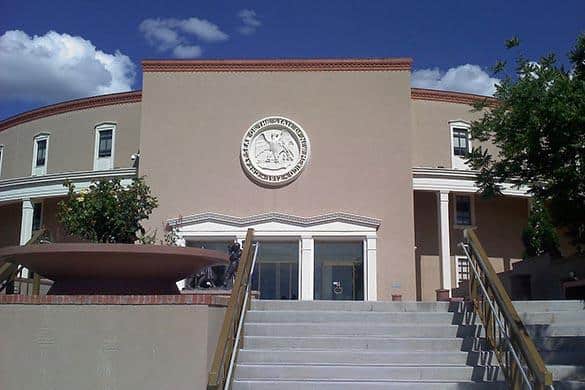 The Roundhouse in Santa Fe. Courtesy/SFNM
By The New Mexican
Days remaining in the session: 5
And now, the deal-making: A bill approved by the House of Representatives to put in place a statewide ethics commission at last received a hearing Sunday in the Senate Rules Committee. But it was pushed far down the agenda, and most of the panel’s members left the room as soon as the issue came up.
The result: The committee didn’t vote on the measure.
The Rules Committee chairwoman, Sen. Linda Lopez, D-Albuquerque, has her own bill to set up the commission. She said she would meet with the House bill’s sponsor to hash out some sort of compromise.
While similar in many respects, the bills are far apart in big ways.
The House proposal by Rep. Daymon Ely, D-Corrales, would give the commission subpoena power. His House Bill 4 also would ensure that cases become public when the commission staff determines there is probable cause to proceed or when there is an agreement to settle a matter.
Lopez’s Senate Bill 619 would impose strict confidentiality provisions on people filing ethics complaints and would not provide the commission with subpoena power.
New Mexicans are likely expecting legislators to agree on something. Three of four voters approved the constitutional amendment in last year’s election that created the ethics commission.
Liquor orders: State senators voted 36-2 Sunday for a bill permitting deliveries of alcohol with orders of groceries, lunch or dinner.
The measure, Senate Bill 494, would allow for local elections to authorize delivery of liquor, beer, wine and cider with food.
Gov. Susana Martinez vetoed a similar bill in 2015. The sponsor, Sen. Jerry Ortiz y Pino, D-Albuquerque, revived the idea, now that a new governor is in office.
The bill next goes to the House of Representatives for its consideration.
Unworthy defense: Matthew Shepard, a gay man who was beaten so badly that he died days after being attacked, is the inspiration for a bill limiting certain defenses in cases of violence.
Two men attacked Shepard, 21, in 1998 in Wyoming, probably intent on robbing him. Later, one of them claimed that Shepard had made a romantic advance toward him and he turned violent in a “gay panic”.
Sen. Jacob Candelaria, D-Albuquerque, has introduced a bill to prohibit defendants in cases of first-degree murder and serious violent crimes from using this “gay and transgender panic defense”.
Senators on Sunday night voted 40-0 for Candelaria’s proposal, Senate Bill 159. Candelaria said the “gay panic” defense has been used in two murder cases in New Mexico.
The Law Offices of the Public Defender has raised objections to the bill on grounds that it could deny a defendant his right to a full and effective defense. For instance, public defenders said, the sudden discovery of person’s sexual identity could cause an impulsive attack, turning a murder case into the lesser charge of manslaughter.
The bill next goes to the House of Representatives.
Fewer drills: A bill giving schools the option of reducing the number of safety drills they conduct is on the way to Gov. Michelle Lujan Grisham’s desk.
Senate Bill 147 puts emphasis on evacuation and active-shooter drills. It cleared the House of Representatives 64-0 Sunday.
The measure, by Sen. Craig Brandt, R-Rio Rancho, decreases the mandatory number of drills, including fire drills, held in a year from 13 to eight. The bill gives schools the option to hold more drills if they like.

Quote of the day:

“I’ve been a used-car salesman, a politician and a lawyer. I’m rounding out the bottom end.” –Sen. Gregory Baca, R-Belen, during debate on a bill about continuing education requirements for car dealers.